Global hedge funds witnessed remarkable and divergent trends in 2011, delivering negative performance but also attracting net positive asset flows for the year. As at end-December 2011, the total size of the industry stood at US$1.7 trillion while the Eurekahedge Hedge Fund Index finished the year in negative territory with a decline of 4.02%.

The global hedge fund industry has undergone significant developments over the last 12 years. It witnessed tremendous growth between 2000 and 2008, as assets under management (AuM) increased from US$277 billion to US$1.95 trillion. The growth trend reversed amid the credit crunch, which brought with it the collapse of large financial institutions and high-profile frauds. The drying up of liquidity, heightened risk aversion and resultant widespread redemptions culminated in the worst yearly performance for the industry, as evidenced by the 10.63% loss the Eurekahedge Hedge Fund Index Suffered in 2008. Performance-based losses led to further negative asset flows, which resulted in greater losses as managers were forced to sell potentially winning positions. The industry reached its nadir in April 2009, with AuM falling to US$1.29 trillion, a drawdown of 33%. 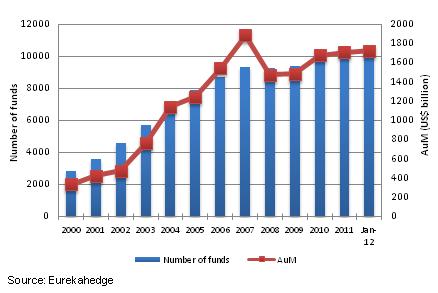 In the years between April 2009 and April 2011, hedge funds posted excellent growth fuelled by strong asset flows and positive performance. The Eurekahedge Hedge Fund Index gained 35.56% in these two years, while investors added more than US$200 billion through net positive asset flows. Declines in global hedge funds were apparent ...