The composite Eurekahedge Hedge Fund Index is up a robust 2.4%1 for the month of April, bringing the year-to-date returns to 5%. Following the market correction of late-February/early-March, financial markets globally continued their strong recovery, with the notable exception of Japanese equities, which were largely flat at month-end.

As might be expected, the rally was stronger in the emerging markets (notably in China, where overriding bullish sentiment prevailed), and to a lesser extent in Europe (given positive economic data such as strong exports). This was broadly reflected in the regional performance of hedge funds for the month, with Asia ex-Japan (4.2%) and Latin American (2%) funds leading their European (1.9%) and North American (1.8%) peers. Returns from Japanese hedge funds, on the other hand, were flat at -0.1%. The graph below compares the performance of regional hedge fund allocations in recent months. 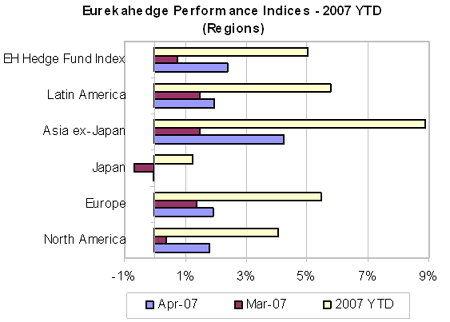 The month’s sustained merger and leveraged buyout (LBO) activity and growing private equity pools of funds, coupled with better-than-expected first quarter corporate earnings data, spurred a rally in the equity markets that outweighed concerns over inflation and the US economic slowdown. The MSCI World Index rose a solid 4.2% for the month, with most of the other major equity indices also reaching notable highs.

In the bond and interest rate markets, US bond prices had a difficult month, plunging initially given strong US employment and producer inflation data, and rising towards month-end on the back of less-than-expected consumer prices data and expectations of a Federal Reserve interest rate cut. European bond prices, on the other hand, went south for the month given a hawkish European Central Bank (ECB). Fixed income markets in Asia (ex-Japan) moved higher, with credit spreads tightening across the board. Rallying equities and the catalysts thereto fuelled risk appetites and bullish sentiment in Asian credit.

In the energy markets, the month’s overall price rise masked choppy movement intra-month, as Iran-related geo-political tensions eased but those pertaining to violence associated with the Nigerian presidential election pushed oil prices higher; crude oil prices rose to US$66 per barrel by month-end. That said, the commodity markets did witness some clear trends – gasoline prices surged on news of historically low inventories ahead of the summer, while record imports from China spurred copper prices to 7-month highs.

And lastly, currency trading was trends-driven and profitable during the month – the euro strengthened to record highs (amid hawkish signals from the European Central Bank and strong European export and consumer confidence data) while the yen weakened to a record low (as the Bank of Japan left rates unchanged given lower-than-expected inflation data and as yen-funded carry trade transactions continued).

Amidst these broad market trends, hedge fund strategies across the board had a better-than-average month, as depicted in the graph below. 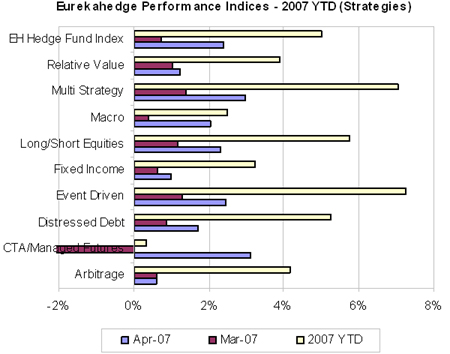 The Eurekahedge North American Hedge Fund Index returned a robust 1.8% in April, with returns spread across strategies. Event-driven (+2.4%), directional macro (+1.9%) and long/short equity (+1.7%) managers all benefited from the rally in equities, which rebounded from their early-March lows on the strength of corporate earnings news and deal flows; the S&P 500 Index rose an impressive 4.2% during the month.

But the month’s best returns came from CTA/managed futures funds (+3.6%), with gains coming from both trend-following (given the rallies in gasoline and copper prices) and discretionary trading (with profitable opportunities to be found in energy equities, particularly in exploration, given the low inventories).

Some of the highlights in the event-driven space, the second best performing strategy in the region during April, included the announcement of the acquisition of UE Waterheaters Income Fund and the bump-up in acquisition price for Biosite Inc. Deal spreads on newly-announced transactions remained at around 10% during the month.

Distressed debt (+1.4%) managers had a healthy run, as the high yield market had another solid month with returns of 1.3%. The markets were also supported by some new issuance, although the pace of issuance activity has come down from its March highs. Profitable positions were also to be found in the rally in the ABX index of mortgage-backed securities. 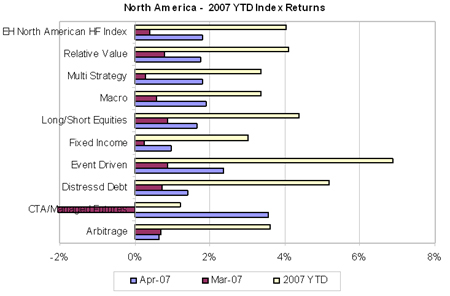 The Eurekahedge European Hedge Fund Index had a solid month as well, returning 1.9% for the month and with returns upwards of 1% across almost all strategies.

European equities rallied strongly in April (the FTSE Europe Index was up 3.5% for the month), as companies continued to report robust sales figures and the implied decoupling from any slowdown in the US, and as M&A activity continued to lend support. As a result, event driven (+2.3%) and long/short (+2.1%) posted solid gains during the month.

CTA/managed futures was another strong performing strategy in April (+2.1%), given that some of the profitable plays in the equity markets were driven by oil-related names benefiting from the shortage of gasoline in the US.

In the M&A space, on the other hand, some of the notable transactions during the month included Barclays’ US$91 billion bid for ABN Amro, which is being countered by a consortium led by RBS.   Fixed income (+0.8%) and relative value in general (+1.3%) posted healthy gains as well, as local currencies and local currency debt were strongly positive in April and as the US dollar continued its slide against the euro (the latter reaching historical highs). 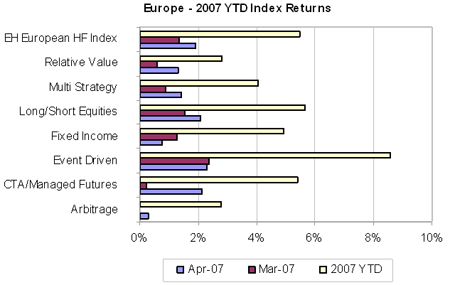 Japanese hedge fund managers had a flat month in April (-0.1%), in step with Japanese equities which ended the month almost unchanged. While strong rallies in the US and a weak yen supported prices during the first half of the month, profit-taking from individual investors who were net buyers during the previous month’s market correction eroded these earlier gains (the TOPIX declined 0.7% and the Nikkei 225 gained 0.7%, while the smaller cap markets were hit harder, with the JASDAQ losing 3.8%, for instance). As a result, the Eurekahedge Japan Long/Short Equities Hedge Fund Index remained virtually unchanged as well.

Most Japan-focused hedge fund strategies had a negative month too. The month saw a return of carry trades to extreme levels as the Bank of Japan left rates unchanged on lower-than-expected inflation data. This contributed to pervasive weakness in the yen against most currencies. Partly because of this, and partly because of the volatile but range-bound equity prices, relative value players had a weak month as well (-1.1%). 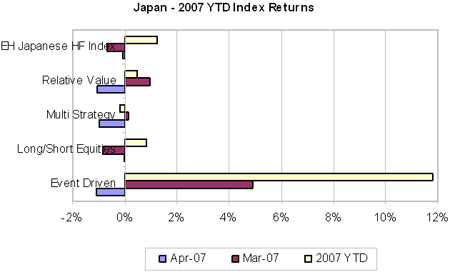 Asia ex-Japan was the best-performing region for yet another month, with the Eurekahedge Asia ex-Japan Hedge Fund Index up a terrific 4.2% during April. All strategies returned positively, with long/short equities (+4%), CTA/managed futures (+5.2%), event driven (+4.5%), and by extension, multi-strategy (+6%), contributed more or less equally to the regional average.

While the reasons for the bullish sentiment were similar to those elsewhere – strong corporate earnings, ebbing inflation concerns and influx of liquidity – the concentration of emerging market opportunities has skewed the returns from the global average, especially those in China and India. Looking at some of the key markets in the region:

In China, the equity markets not only staged a broad-based rally but were also extremely resilient to negative data such as expectations for a series of tightening measures from the government. For the month, the Shanghai Composite Index surged a whopping 22.8%. Special situations players also found profitable opportunities, notably in the China Molybdenum IPO as also the A/B-share class merger basket.

In India, the equity markets were up a solid 6% (in local currency terms), after initial setbacks in the form of the Reserve Bank of India’s unexpected hike of the cash reserve ratio on the last trading day of March. The sharp bounce back is again attributable to corporate earnings and activity.

In Australia too, opportunistic and long/short managers performed well during the month, with equity prices benefiting from takeover speculation.

In Korea, improving economic fundamentals triggered a return of foreign capital, as also of domestic institutional investors (pensions and insurers); the KOSPI rose 6.2% for April, with energy and industrials leading the market. 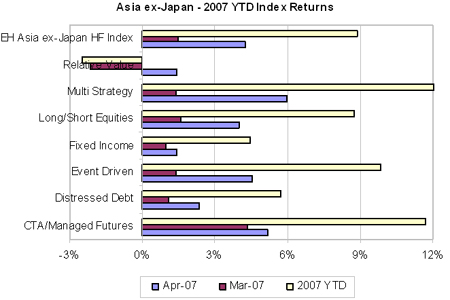 In the Brazilian markets, the equity index Ibovespa rose 7% during the month led by mining and basic materials sectors, and driven by an influx of liquidity (companies were able to raise US$6 billion in IPOs from local and foreign investors). The month’s strongly bullish environment was profitable for both equity long/short (+2.2%) and opportunistic (+1.3%) players.

Dissent at the Central Bank’s monetary policy committee meeting regarding the interest rate cut to be implemented (25 vs 50 basis points), implies the likelihood of 50-basis-point cuts becoming the norm again. Coupled with subdued inflation and exchange rate appreciation, this has led to falling inflationary expectations. The resulting strong rally in bond prices proved beneficial to fixed income (+0.9%) players, and contributed to the returns of the month’s best-performing strategy, directional macro (+2.8%). 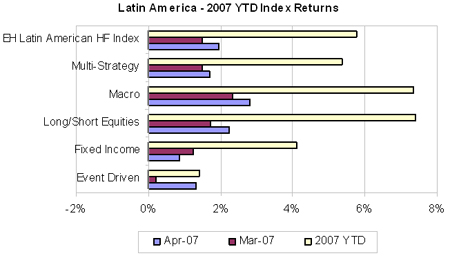 Hedge fund performance in April was easily the best in the last 12 months, as liquidity, strong earnings and improving economic fundamentals in emerging markets, all combined to spur global markets to a strong recovery. This suggests that there is continued fundamental support for current equity valuations, at least in the near term.

Looking ahead, overall economic activity in the US slowed in Q1 as strength in consumer spending was not enough to offset weakness in housing, net exports and inventory investment. Given that economic growth was well below trend for the fourth consecutive quarter, inflationary pressures are expected to recede. As for the Fed’s monetary policy, the target funds rate is likely to be left unchanged unless weakness in housing spills over into consumer spending.

In the other regional markets, the start of the earnings season has been, in the main, encouraging. And with improving emerging market fundamentals (for instance, the case of Brazil – strong balance of payments, subdued inflation, moderate growth in production, appreciating currency and robust imports), we continue to maintain a positive near-term outlook for hedge fund performance.

2The Eurekahedge Japan Hedge Fund Index is a separate index and derives its value not only from the actual performance of the listed strategies for the investment region but also from the strategies which are not listed (due to strict Eurekahedge indices guidelines) but having the same investment mandate.