Malaysia remains firmly ahead of its peers in Southeast Asia in terms of the development of Shariah-compliant funds. Nonetheless, the industry has had to change over the years not only to retain this lead but also to respond to client demands for more diverse investment choices. It is the nature of this evolution that we seek to analyse, by looking at a wide range of metrics (from industry make-up to historical performance) of funds originating from this country.

Malaysia has well over 120 Islamic funds across all asset classes, which represent a considerable 22% of the total number of funds available worldwide (the total universe stands approximately at 550). This is even more substantial when considering there are roughly 40 other Islamic products in the rest of the Asia-Pacific region (most of these being based in Indonesia and to a lesser extent Singapore).

Furthermore, the aggregate assets in Malaysian funds amount to more than MYR12 billion (US$3.6 billion), having successfully tapped a strong local market and most recently wooing overseas investors as well. Over 85 of these funds appeared in the market in the last five years alone, which comes as no surprise considering the trend globally. In tandem with the stable increase in the number of funds, the average size of these funds has also increased. In fact there has been a gradual growth of fund sizes across the board, particularly in the last two years as depicted in Figure 1. 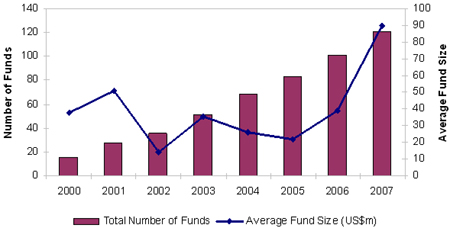 However, there has been a slowdown in the number of fund launches globally, in particular since the peak of 2006, but Malaysia has managed to buck this trend. In fact 2007 has seen the greatest number of launches ever (over 21 so far this year), with a notable focus on money market funds (eight new launches in this category), as seen in Figure 2 below. Most recently, this has also included forays into real estate and private equity vehicles, which are both accounted for in the “Others” category. 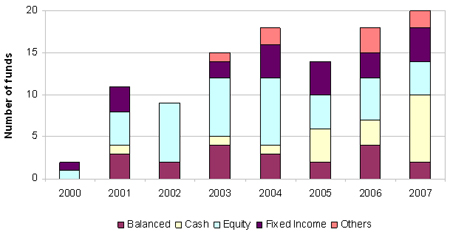 Equity funds retain the bulk of the attention both in terms of asset size (67% of all allocations) and in number of funds (43% of all products offered), but the trend in the recent past has been to diversify into other asset classes. The end result is evident from both Figure 3 in terms of asset allocations, and Figure 4 in terms of total number of funds offered. At first glance it seems that money market and balanced funds do not seem to be as attractive to investors – they represent 33% of the total products offered but account for less than 13% of total assets.

What is not immediately observable is the gradual drift towards regional exposures as opposed to country-specific mandates. This would partially help explain the significant allocation into equity funds since these have moved away from being Malaysia-focused towards more pan-Asian mandates. On the other hand, fixed income funds have been able to hold their ground with 13% of total assets captured in this category, despite some suggestions that their structure is not acceptable by non-Malaysian investors.

What still holds true – regardless of geographical mandate – is that a track record is as valuable as ever, and longevity does command higher asset sizes as shown in Figure 5. Hence funds launched in 2000 or earlier account for approximately US$700 million in assets, although vintage years like 2001 and 2002 clearly struggled. However, more recent launches have managed to successfully raise US$800 million in the last two years. This is partly due to greater geographical diversification being offered and the more aggressive nature of these funds.

The average management fees being charged by funds can be used as a measure of aggressiveness as well as competitiveness in the marketplace. Traditionally, older funds would be expected to charge higher fees as they stake a claim on experience and concrete track records, whilst young funds compete for assets with less tangible evidence and thus command lower fees (especially in crowded markets).

As seen in Table 1, this holds true for Malaysia across all asset classes (fixed income funds, for instance, have lowered their fees from 1% to 0.94%), with the exception of equity funds. The average management fee for these funds has increased from 1.5% to 1.75%, despite shorter track records and more funds being on offer. This can be explained by greater active management and more intensive equity research across a larger stock universe.

Although assets have grown consistently and a wider range of products is now available to investors, the focus is now on differentiation. This has remained a challenge for fund managers as Figure 6 shows that the gap between top and bottom quartile returns has remained very tight. Only in recent months is there clear evidence of a breakout from this trend.

Annualised returns for 2007 solidify the notion that experience matters, as shown in Figure 7, with older funds having performed better this year during the recent market turmoil than their younger counterparts. The greater dispersion of returns for older funds also makes it easier to discern the top performers, while this remains difficult amongst younger funds. In addition, the Sharpe ratios shown in Figure 8 suggest that pre-2005 launches offer a more stable risk-return profile, while younger funds attach a more aggressive stance to their offerings.

Malaysia remains a fast-developing market at the forefront of Islamic finance. In turn, several market participants have moved ahead to attract a new wave of investors and increase their product offerings accordingly (CIMB, for example, is becoming one of the first Islamic banks to offer universal banking solutions). This new wave of products seeks to succeed by catering to a wider investor base and a more aggressive appetite. It is their success that will fuel more participants into the fray and further encourage more innovative products into the market.