After two consecutive positive months amid rising risk appetites and rallying markets, hedge funds across the board gave back some of these gains in November, with the composite Eurekahedge Hedge Fund Index down 1.6%. A key factor in this market turn was re-emerging concerns over problems in the US housing and subprime markets, as it became apparent that the losses suffered by some of the large global financial firms were far greater than expected. This led to large-scale risk aversion among market participants.

Market volatility during the month, both intra-day and intra-month, was one of the worst seen this year; the S&P500, for instance, recovered five percentage points in just the last week, finishing the month down 4.4%. Profit-taking and short positions helped offset some of the intra-month losses, but most regional and strategy hedge fund averages were, in the main, negative at the end of the month, as evidenced by the figure below. The impact of the month’s market downturn was most pronounced among allocations to Europe (-2.7%) and Emerging Asia (-2.4%), which were predominantly equity-focused and were the worst-hit by the broad-based equity downdraft coupled with sharp volatility.

Energy prices, after nearly breaching the US$100/barrel mark, closed the month lower amid expectations of an increase in output by OPEC members. On the other hand, mild US weather forecasts led to a steep decline (to the tune of 12%) in natural gas prices.

In the currency markets, the US dollar reached record lows against the euro and the Japanese yen early in the month, before strengthening on the back of rate-cut expectations and unwinding carry trade positions.

Given the sharp reversals in the equity, currency and oil markets, and the attendant volatility, November proved a difficult month for hedge fund strategies almost across the board, as is evident from the figure below. A detailed, region-wise analysis of the underlying factors driving the month's returns is taken up in the following sections of this write-up. 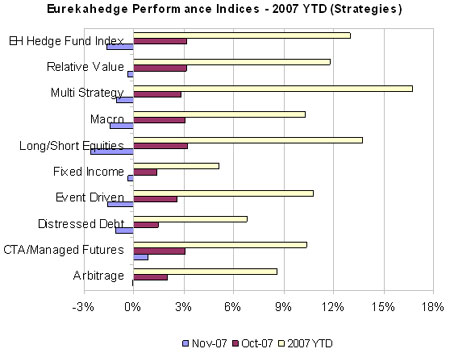 The region saw turbulent markets during the month as major investment banks reported large write-downs on account of their subprime exposure. This led to a sharp increase in risk aversion, bringing about a large-scale sell-off in equities. The S&P 500 corrected about 10% during the month, but rallied towards the month-end as market players priced in an interest rate cut, and finished the month down 4.4%. The consequent rally across the bond markets pushed yields significantly lower; the yield on the 90-day US T-bill and the 10-year US T-note declined by 75 and 50 bps respectively. On the currencies front, the dollar continued to decline against most majors, but saw some strength towards the month-end.

Amid these market movements, North American hedge funds finished the month down 1.2% on average. Given the weak and volatile markets, most strategies (with the notable exception of CTAs) finished the month flat to negative. Equity-focused funds registered losses averaging 2.3%, as long positions in the consumer non-cyclical and energy sectors, among others, saw losses. The performance of distressed debt managers took a hit (-2.5%) due to weakness in the subprime loan market. Widening spreads on outstanding LBO transactions coupled with the negative outcome of exposure to special situations, played a part in pulling down the performance of event-driven manager (2.6%). 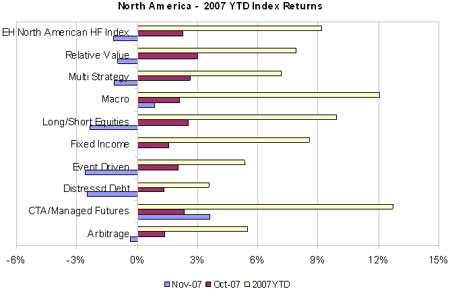 CTAs, benefiting from shorts on the US dollar and from commodity-linked trades, posted outstanding gains averaging 3.6%, while fixed income managers, whose gains from rallying bonds offset losses from other allocations, ended the month flat (0.04%). Arbitrageurs and relative value managers finished the month down 0.3% and 1% respectively; high volatility created some trading opportunities for the former, while the lag in convertible valuations (relative to interest rates), among other things, worked negatively for the latter. Multi-strategy players finished the month down too, with losses averaging 1.1%.

Europe was among the worst hit regions in November, as far as hedge fund performance is concerned. The Eurekahedge European Hedge Fund Index finished the month down 2.7%, as hedge funds were adversely impacted by the global credit crisis. In the underlying markets, equities (after rallying toward the month-end) finished the month in negative territory; the FTSE was down 4.3%, while the large-cap index lost 8% during the month. On the currencies front, the euro, after touching its record-high against the US dollar, ended the month up 1% (as speculation of the Fed’s action to avoid an economic recession, marginally strengthened the US dollar). However, the British pound ended lower to the dollar, as weaker-than-expected economic data (in the UK) broadened the chances of a rate cut by the BOE. 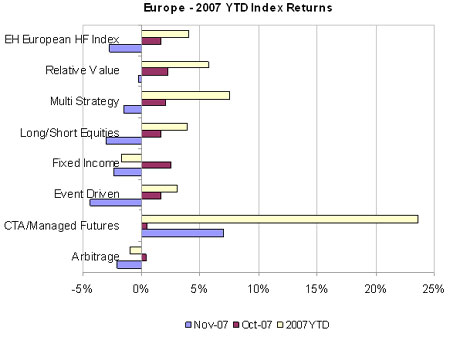 Against the backdrop of the above movements, long/short and event-driven players registered the lowest returns, averaging -3% and -4.3% respectively; the former were largely affected by notable losses among large-caps and financial stocks, while the latter were negatively impacted by the credit crunch that brought about widespread unavailability of special-situation-funding during the month. Fixed income funds registered losses averaging 2.3%, as, among other things, tight liquidity conditions in the region pushed the 3-month LIBOR up in excess of 30 bps, during the month.

Arbitrage and relative value managers were down 2% and 0.2% respectively, with quant funds and funds trading in loans and credit markets exhibiting poor performance during the month. Multi-strategy players, owing to overall weakness in the market and most strategies posting losses, ended the month down 1.5%.

Japan-focused hedge funds were among the better performers in November, as the Eurekahedge Japan Hedge Fund Index lost a mere (compared to some others) 1.6%. These returns were realised against a backdrop of immense volatility across the underlying markets. Domestic equities (like in the case of many other regions) had a rough month; the Topix rallied 8.1% from its month’s lows before closing down 5.4%, and the Nikkei finished the month down 6.3%. Long/short managers in the region ended the month down 1.7%, as investments (long positions) in the technology, construction and wholesale trading sectors, among others, adversely affected the month’s performance. 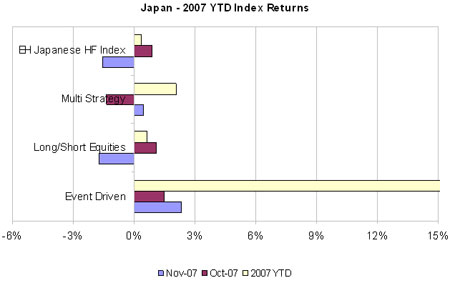 Among other strategies, event-driven funds finished the month up a healthy 2.3%, owing to opportunities among special situations in the region. Multi-strategy funds realised gains averaging 0.4% in November, on the back of favourable movements and economic data to profit (or offset equity-related losses) from. Further appreciation of the yen (up 3.6% against the US dollar), sharp increase in overseas sales (particularly to markets like China and India) and the decent performance of long bonds (as their yields hit a new low of 1.43%), were some notable trends during the month.

After many months of outperformance and relatively high resilience towards global issues, Asia ex-Japan hedge funds had a difficult month in November. The Eurekahedge Asia ex-Japan Hedge Fund Index finished the month down 2.4%, as some considerably overvalued regional markets corrected significantly during the month.

China, which has been an outperforming market since quite some time now, saw sharp corrections in its overvalued stock markets in November. The Shanghai and Shenzhen Composite indices finished the month down 18.2 and 15.5 percentage points respectively, as domestic large caps (which rallied strongly during recent months) sold off significantly. This coupled with sharp corrections across Hong Kong’s stocks (-9%), went quite some way in pulling down the performance of China-focused hedge funds, which lost 5.6% during the month. Equity-focused funds were down 5.4%, while multi-strategy players, finished the month down 6.1%. 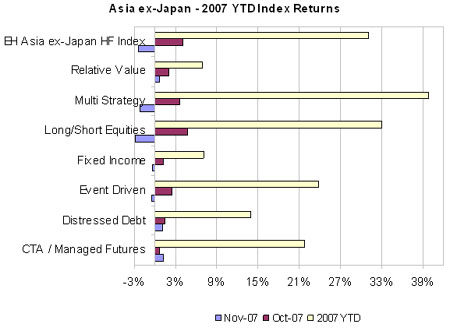 India’s BSE Sensex, which saw corrections of about 10% during the month, rebounded sharply towards the month-end, finishing down only 2.4%. The month witnessed a sharp correction across large caps (as foreign institutional investors sold off aggressively), but small and mid caps performed surprisingly well, ending the month up 5.1 and 7.4 percentage points respectively. These movements, coupled with trends in currencies (Indian rupee fell by 0.8% against the dollar) and commodities kept India-focused funds in good shape – long/short and multi-strategy managers registered returns averaging 2.5% and 1.8% respectively, and the Eurekahedge India Hedge Fund Index ended the month up 2.3%.

Korean hedge funds finished the month down 3.1%, being affected by the performance of equities in the region, among other things. Regional financial stocks were among the underperformers, while Korean tech-stocks aided some managers in offsetting some losses. Korean bonds also did well, posing decent opportunities for funds allocating to the region.

Australia/New Zealand focused funds ended the month absolutely flat. The ASX all ordinaries and NZX 50 were down 2.7% and 3.5% respectively, against the backdrop of which long/short managers finished the month up 0.4%. Event-driven players had a relatively decent run, gaining 0.8%, as a number of special situations were seen in the region, such as the completion of the merger of Adelaide Bank and Bendigo Bank, among others. Multi-strategy players lost 1.3%, which can partly be explained by the sharp decline in the Australian and New Zealand dollars against the US dollar (on the back of unwinding of carry trades), and by the increase in interest rates in the region. Relative value players finished the month flat.

The Eurekahedge Latin American Hedge Fund Index declined by 1.5% in November, as hedge funds allocating to the region registered better-(less negative)-than-average returns. Domestic Latin American markets (like most global markets) saw high volatility owing to the global credit concerns. Brazilian and Mexican equity indices finished the month down 3.5% and 5.4% respectively, while in the currency markets, the Brazilian real, and the Argentinean and Columbian pesos all closed lower against the US dollar. 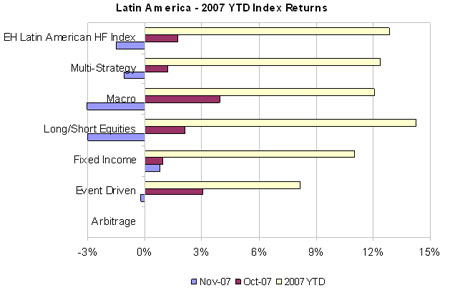 Among strategies, fixed income players were the only ones to finish the month in positive territory, returning 0.8%, with gains coming from, among other things, the Brazilian fixed income markets (as short positions in bonds proved profitable). Long/short and macro managers suffered the most, losing 3% and 3.1% respectively; the former were down as long positions across equities in the region resulted in losses, while the latter was impacted by the weakening of domestic currencies and by interest rate trends, among other things. Event-driven players finished the month rather flat (-0.2%), while multi-strategy funds ended the month down 1.1%, with trades in equities and currencies, among other things, resulting in negative returns.

In our previous month’s review of (Oct-2007) hedge fund performance, we were of the opinion that volatility may be expected to persist in November, given that third quarter earnings reports had not yet been fully reported and that the extent of credit exposure among major investment banks and bond insurers remains uncertain. As it turned out, markets in November had to contend with negative news on both fronts, leading to a broad market downturn, receding risk levels and a stepping up of volatility.

Even as the markets rebounded in a late-month rally on expectations of further interest rate cuts, it remains to be seen, as we look forward towards the end of the year and into 2008, whether and to what extent the Federal Reserve’s monetary policy can ease a liquidity crunch and improve the significant supply and demand imbalances that remain in the US housing and credit markets. The overarching risk is that of these imbalances dragging the economy into a recession.

As the Federal Reserve attempts to contain a subprime spillover and preclude a repetition of market movements of a few months ago (through lowering rates and protecting subprime borrowers), the magnitude and reach of the problem suggest greater volatility in the months ahead. As other asset classes readjust to the current environment of tighter credit and the dislocation between fundamentals and price movements abates, valuations are bound to become more attractive, creating both challenges and opportunities for hedge funds in the coming months.

1The Eurekahedge Japan Hedge Fund Index is a separate index and derives its value not only from the actual performance of the listed strategies for the investment region but also from the strategies which are not listed (due to strict Eurekahedge indices guidelines) but having the same investment mandate.

Please login to read the rest of the article or sign up for a free trial.
Forgot your password?