Islamic finance makes up a small part of the world finance industry, estimated to be worth US$700 billion globally. However, it has grown by around 15% in each of the past three years, partly as a result of the increased wealth in Islamic countries driven by high oil prices. This rapid growth shows no signs of slowing.

While catering to such specific needs of society, Shariah-compliant financial services could appeal to other segments of the population so long as the quality of these services is at least comparable to other alternatives. Islamic finance covers all financial activity that enables Muslims to invest while conforming to Islamic law, or Shariah.

In practice, Islamic finance involves using traditional investment techniques and structures that comply with Shariah to create arrangements that work in ways that are comparable to modern conventional finance.

Malaysia in the Lead

For Asia-Pacific, we expect new Islamic securitisation transactions in 2008, at least in Malaysia. In January, Menara ABS issued RM$1 billion (US$306.1 million) of Sukuk Ijarah backed by four properties. (The properties are removed from the balance sheet of the originator, Telecom Malaysia.)

Malaysia continues to lead the way in terms of offering an attractive environment for Islamic finance. The government has been very proactive in encouraging Islamic finance, implementing measures such as numerous tax benefits that favour Sukuk funding over conventional methods. 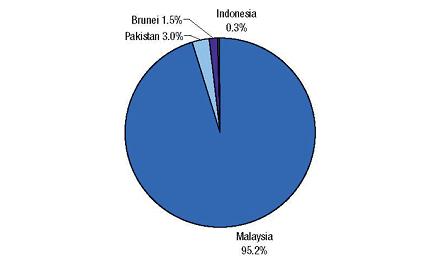 Malaysia also remains the biggest domestic market worldwide. Ringgit-denominated Sukuk issued in 2007 was equivalent to US$64.4 billion, representing 66% of the global outstanding as at 31 December 2007 (see pie chart above).

There were a number of notable features in the Asian Sukuk issued in 2007. Among these, Malayan Banking Berhad issued Sukuk in April 2007 (Malayan Banking Sukuk), raising US$300 million to fund the bank’s Islamic banking operations and representing the first cross-border subordinated Sukuk issuance.

Moody’s assigned a Baa1 foreign currency rating to the subordinated Sukuk certificates in April and upgraded the rating to A3 in May. The A3 rating is constrained by the country ceiling. Specifically, the bank intends to use the proceeds to refinance existing conventional US dollar subordinated notes.

The transaction will allow Maybank to raise funds on terms compliant with Shariah principles. It will also count as Tier 2 capital under existing capital adequacy regulations. The rating is directly linked to that of Maybank, the obligor; because it has agreed to provide advances to cover any shortfall between the profits generated from the portfolio assets and the required periodic distribution amount to certificate holders.

Maybank has also irrevocably undertaken to purchase the issuer’s interest in the portfolio assets at the relevant exercise price sufficient to pay the certificate holders, either at maturity or on dissolution.

Moody’s noted that Maybank, as the asset manager, will collect profit from the portfolio assets and pay the issuer an amount sufficient to fund the required periodic distribution to certificate holders on each distribution date.

The regulatory authorities issued their first Islamic bond regulation in 2002, and the Indonesia Capital Market Supervisory Board followed up in November 2006 with a second set of regulations that represent an attempt to encourage insurers, pension funds, banks and mutual fund managers to invest in Sukuk.

Furthermore, investors in Islamic finance may be attracted by the potentially higher yield of subordinated paper. Finally, conventional banks, through their Islamic windows, may also consider issuing subordinated Sukuk to access a broader base of investors and attractive funding.

In the latest example of efforts to clarify the situation, the Indonesian Accounting Association in 1H2007 issued regulations for the treatment of securitisation, to apply from 2009. In November 2006, the authorities also introduced Sukuk CIC, a collective investment contract used for structured finance transactions. But no structured finance deal conventional or Sukuk has debuted using this structure.

Malaysia intends for Islamic finance to account for 20% of its banking assets by 2010. Moody’s considers this target achievable, given the efforts of domestic banks and the issuance of Islamic banking licenses to foreign players.

This creates significant growth potential for Sukuk, which can be used by Islamic banks for long-term funding and asset-liability management purposes.

In November 2007, Bank Negara Malaysia announced its plans to encourage foreign banks to conduct Islamic banking in multiple currencies. To this end, the Malaysian regulator may issue more licences to those banks and give them special tax incentives. This has been viewed as a way to promote Malaysia as an international hub for Islamic finance.

Rupiah-denominated Sukuk represented only 0.4% of global outstanding Sukuk at year-end 2007. A total of 20 Sukuk, or 3.88%, of all bond issuance in Indonesia were issued between September 2002, when Indonesia made the market’s first issuance, and the end of July 2007.

Another challenge for the development of Sukuk in Indonesia lies in the need to boost understanding of securitisation (be it conventional or Islamic) as well as to improve accounting and tax treatments as they relate to securitisation.

Singapore’s authorities have made evident their interest and enthusiasm for Islamic products. The Monetary Authority of Singapore (MAS) constantly works with the industry to ensure both Islamic and conventional financing have comparable supervision under the country’s tax and regulatory framework.

Concessionary tax treatment for Sukuk is similar to that for conventional bonds, while Singapore has also waived the double imposition of stamp duties on real estate financing structured under Shariah law.

In Hong Kong, the authorities are fully supportive of the development of Islamic finance. In November 2007, the Securities and Futures Commission approved the first Islamic fund (Hang Seng Islamic China Index Fund), available to retail investors.

Furthermore, the Hong Kong Monetary Authority announced in January 2008 that it will apply for associate membership of the Islamic Financial Services Board. As such, Hong Kong could position itself as an international platform for Islamic funding for mainland China needs, particularly in the domain of infrastructure projects.

Given that only 20% of the population has a bank account, this offers major opportunities for growth in both conventional and Islamic products. The drive by the government to reform the financial services sector and privatise several state-owned banks is expected to help drive competition and spur development. It will also increase the number of foreign institutions offering Islamic products.

Japan is the most recent major developed economy to tap into the Sukuk market. The government will issue its first sovereign Islamic Sukuk, valued at between US$300 million and US$500 million, through Japan Bank International Cooperation. This issuance is expected to come to the market by the end of 1Q2008.

Moreover, Thailand and Singapore are contemplating issuing their first Sukuk in 2008. Several banks in Singapore are also looking at specialist subsidiaries. DBS Bank Ltd (Aa1, stable) has taken the lead with its launch of The Islamic Bank of Asia (IB Asia) after approval from MAS for a full bank licence in May 2007.

In the medium term, there could be a significant potential for cross-border and issuance.

The authorities are currently looking at improving the fiscal environment. By focusing on Sukuk, Hong Kong could also become a platform for the development of Islamic securitisation. This is an excerpt from a special report on international structured finance written by Faisal Hijazi and Dominique Gribot-Carroz of Moody’s Investors Service This article first appeared in Islamic Finance news (Volume 5, Issue 8).
[Top]