In another month of strong relative outperformance to the underlying markets, the composite Eurekahedge Hedge Fund Index lost 0.8%1 in February against a 10.5% drop in the MSCI World Index and a 4% fall in the Reuters CRB Index. In terms of assets, hedge fund losses eroded 0.3% (US$4.5 billion), while redemptions for the month stood at US$20.3 billion. 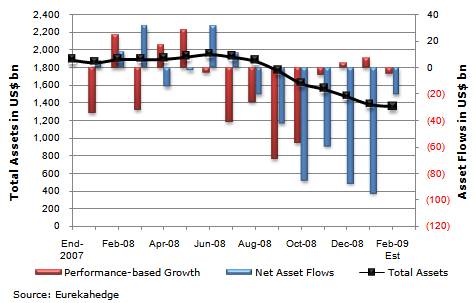 Below are the highlights on asset flows for the month of February:

Having said that, we continue to expect net redemptions over the next few months, especially out of funds with lock-ups expiring towards the end of 1Q2009, and those that had either suspended or gated their redemptions over recent months. Furthermore, we also expect the continued uncertainty in the markets along with the continuous flow of negative economic data, and the resultant risk aversion among investors to translate into redemptions in the near future, particularly among individual investors.

On the other hand, we expect the little positive news, economic data and market movements – such as the passing of the US$787 billion US economic stimulus package, the expected profitability of some major US banks and the resultant short-lived optimism-based rallies across global equities – to positively impact (albeit marginally) investor sentiments. This, coupled with the continued strong relative outperformance of hedge funds as compared with long-only and conventional mutual/unit-trust fund managers, leads us to believe that hedge funds will soon start attracting more capital from investors looking for healthy risk-adjusted returns, particularly over the long term.