The global hedge fund industry has seen exponential growth over the past decade, with hedge fund assets peaking in mid-2008 at US$1.95 trillion – a seven-fold increase since the start of 2000. However, the drying up of liquidity, the collapse of some large financial institutions, a spike in risk aversion, tumbling equity markets and the resultant spate of redemptions saw assets shrinking by nearly a third, hitting a low of US$1.29 trillion as at end-April 2009. 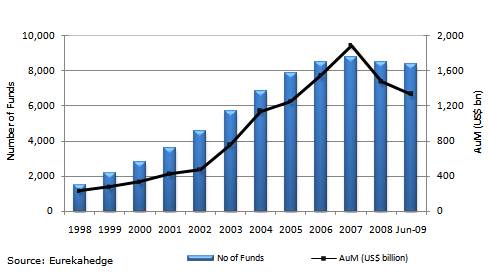 The notably smaller decline in the number of funds than in assets in 2008, as visible in the figure above, is largely an outcome of widespread redemptions from hedge funds and losses due to tumbling markets, as well as forced-selling by managers. While these factors did lead to well over 850 fund closures in 2008, partly due to the inability of many to meet operational expenses (attributable to the prolonged lack of performance fees), the industry also saw a healthy number (over 600) of hedge fund start-ups during the year by managers aiming to exploit the attractive valuations and other opportunities the markets afforded them with after hitting rock bottom.

Coming into 2009, a flattening yet downward AuM curve in Figure 1 shows a distinctive slow-down in the shrinkage of industry assets. We attribute this to factors such as signs of stability across the underlying markets, a significant (positive) shift in risk appetites, and most importantly, the consistent outperformance of hedge funds to most other investment vehicles, which among other things, have resulted in net inflows into hedge funds through May, June and July. Going forward, we expect to see more money flowing into the hedge fund industry, owing to the fact that hedge funds have delivered consistent returns and also somewhat protecting investors’ capital when the markets tanked in 2008; while most other types of funds and asset classes proved to be largely unfruitful. This is reflected in the fact that the Eurekahedge Hedge Fund Index is up 12.9% since the start of 2007, while the S&P 500 (taken as a proxy for the performance of an average global mutual fund due to the unavailability of a mutual fund index) is down 37.8% over the period.

This full article is available in the EH Report accessible by paying subscribers only. For this month only, we are opening up the August EH Report for free to all readers.

Subscribers may continue to login at the homepage to download the full report and non-subscribers may email to database@eurekahedge.com to request for a free softcopy.