Shariah Perspectives on the FX Swap

The FX swap is a derivative instrument that has a specific objective to hedge against the risk of fluctuations in the exchange rate. The conventional structure of a FX swap normally involves two foreign currency monetary exchanges: at the beginning and at the expiry date (FX swap involves exchange and re-exchange of foreign currency). The dual exchange makes this FX swap different from a forward contract. In the forward contract, the exchange only takes place once.

The FX swap involves two stages of exchange. At the beginning when the first currency exchange takes place, US dollar is converted to ringgit based on the spot rate. On the same day, both sides will seal a forward contract to exchange the ringgit back to US dollar at a forward rate.

From the Shariah viewpoint, the problem with the conventional FX swap structure arises when the parties involved want to exchange currency sometime in the future but fix a rate on the day the contract is concluded. This contravenes basic Shariah rules governing the exchange of currency (sarf). Under sarf, it is prohibited to enter a forward currency contract, where the execution of a deferred contract in which the concurrent possession of both the counter values by both parties does not take place.

This rule applies in the case of a FX swap, since the contract of exchanging two foreign currencies is done on a forward basis, where the contract is concluded today but the exchanges actually happen in the future (on the date of maturity).

There are two structures under the Islamic FX swap. One structure is based on the tawarruq contract (also known in the market as commodity murabahah transaction) and the other adopts the concept of wa’d (promise/undertaking).

Islamic FX Swap based on Tawarruq

This is structured with the application of two sets of tawarruq (at the beginning) to achieve the same effect as a conventional FX swap. As an illustration, say an investor has US$14.5 million and he wants to invest in the euro currency (EUR) but does not want to be exposed to fluctuations in the currency market. This FX swap product aims to protect the investor from currency rate fluctuation risks.

To understand the process and mechanism which is used in the Islamic version of FX swap that complies with Shariah, diagrams 1(a) and 1(b) gives a complete illustration of the mechanism of Islamic FX swap.

Islamic FX Swap based on Wa’d

The second structure in a FX swap is based on the concept of wa’d. The wa’d is an Arabic word which literally means “a promise”. The value of the wa’d in Shariah is similar to the value of a social promise in the common law.

The promise may have moral force, in that breaking it may provoke opprobrium (social blame) but it does not entail legal obligations or legal sanctions. Under the civil law, the wa’d can be binding or non-binding, depending on the intention of the party who is giving the promise.

The OIC Islamic Fiqh Academy, based in Saudi Arabia, has decided that the wa’d is “obligatory not only in the eyes of God but also in a court of law” when:

Also, it is a requirement that the actual sale – if the promise was in respect of selling a certain asset – be concluded at the time of exchange of the offer and the acceptance (known in Arabic as majlis al-aqd) and not at the time of the wa’d. The Islamic FX based on the wa’d structure involves exchange of currencies (sarf) at the beginning and a promise or undertaking (wa’d) to carry out another sarf at a future date based on the rate determined today. At the expiry date, the second sarf will be implemented to get back the original currency. 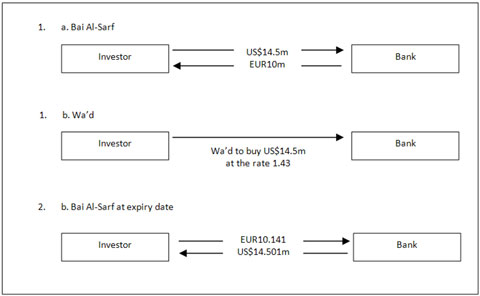 The general Shariah parameters that one must abide by when structuring swap products are as follows:

Most of the swap products that have been approved by the respective Shariah committees of each financial institution have put a condition that Islamic swaps are exclusively for hedging purposes. This means that swaps can only be used as an insurance activity aimed to protect an asset from adverse change, which can be an unexpected or undesirable change in the value of an asset, at the lowest cost.

Based on statistical reports issued by the US Office of the Comptroller of Currency, only 2.7% from the total of derivatives are used by end users. That means transactions that aim to hedge only achieve the percentage stated, while the majority of 97.3 % is used by dealers, or in other words, by speculators.

These statistics will surely trigger concern as to what extent the Islamic swap product is really free from speculative activity that is not allowed in Shariah. Thus, more detailed guidelines or parameters (dhawabit) are necessary to make sure that this product is used solely for the purpose of hedging and not for speculative activities. Some financial institutions give a written representation to get a guarantee and declaration from the counter-party subscribing to the swap product, thereby, making sure that the swap is only used for the purpose of hedging and not speculation.

For other financial institutions, the swap is only used for hedging when there is a clear underlying transaction and contract, for example, the ijarah contract. This is to ensure that the underlying asset or asset foundation for the swap instrument is based entirely on actual and real economic activity and not a fictitious one.