The Asian hedge fund sector grew at an exponential pace through the first eight years of the last decade before witnessing heavy redemptions in 2008 and early-2009 along with significant losses due to the financial downturn. The size of the region’s hedge fund industry peaked in December 2007, reaching US$176 billion; however, the combined effect of withdrawals and performance-based losses brought the assets under management down to US$105 billion in April 2009. Since then, however, the sector has undergone a remarkable turnaround in the last five months of 2009, attracting significant amounts of capital as well as posting record performances – the Eurekahedge Asia ex-Japan Hedge Fund Index was up 37% in 2009 – bringing the size up to US$117.4 billion dollars as at end-December 2009.

Figure 1 shows the growth in the number of hedge funds and the assets under management in Asian hedge funds since 2000. 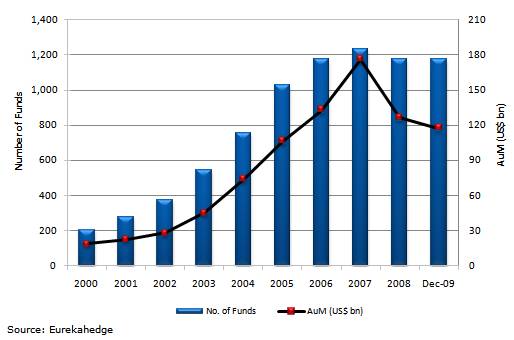 Asian hedge funds entered 2009 on a rather sombre note. Massive withdrawals flowing over from 2008 resulted in a sharp decline in assets during the first four months of the year, which also translated into greater performance-based losses due to forced selling and liquidating positions. Assets under management in Asian hedge funds declined by US$26 billion in the first half of the year due to net negative asset flows – a decline of 15%.

However, with a turnaround in the markets post-March, regional managers delivered some remarkable returns which served to...