The global hedge fund sector continued its robust recovery from the global financial crisis throughout 2010. The industry has witnessed strong inflows since the second quarter of 2009, while hedge funds across all regions and strategies delivered positive returns for 2009 and 2010, with some indices posting record gains during this period. The Eurekahedge Hedge Fund Index was up 10.99% in 2010.

Since the start of the last decade, the global hedge fund space has seen some remarkable trends. At the start of 2000, total industry assets stood at US$277 billion and over the next seven years, the sector witnessed tremendous growth to reach US$1.95 trillion, a seven-fold increase. However, the growth trend reversed in 2008 amid the credit crunch, collapse of large financial institutions, high-profile frauds and the subsequent financial crisis. The drying up of liquidity, heightened risk aversion and resultant widespread redemptions culminated in the worst yearly performance for the industry – the Eurekahedge Hedge Fund Index lost 10.91% in 2008. Additionally, performance-based losses led to further negative asset flows, which resulted in greater losses, as managers were forced to sell potentially winning positions. The industry reached its nadir in April 2009, with assets under management falling to US$1.29 trillion – a drawdown of 33%.

Figure 1 shows the growth in the number of hedge funds and assets since 1999. 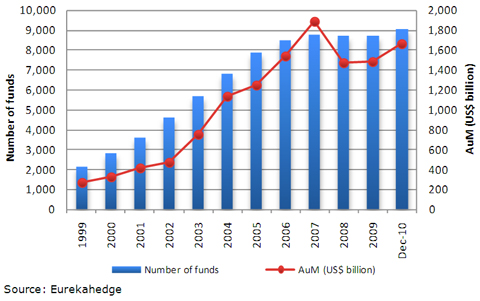 After exhibiting a strong recovery in the April-December 2009 period, managers witnessed...