Asian hedge funds have witnessed remarkable growth over the last decade in terms of both fund population as well as assets under management (AuM). As at August 2011 the total AuM in Asian hedge funds stood at US$135 billion; nearly six times that as of end-2000 while the number of funds increased more than six fold in that same period.

Although assets managed by Asian hedge funds peaked in 2007 at US$176 billion, the size of the region’s hedge fund industry was hit by the combined effect of redemptions and performance-based losses through the global financial crisis causing AuM to fall to US$105 billion in April 2009. 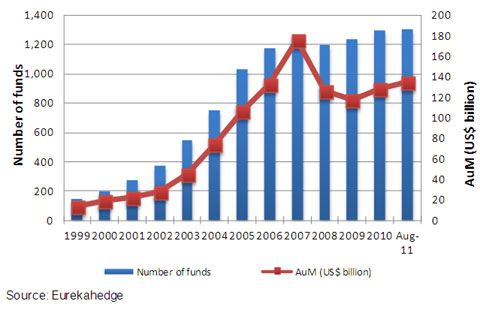 Since April 2009 the industry has witnessed healthy growth, gaining nearly US$31 billion over a period of 28 months. During this time the Eurekahedge Asian Hedge Fund Index ...