Among all the regions in the global hedge fund industry, Europe has witnessed the most dramatic changes over the last five years. At the start of the new millennium the total assets under management (AUM) in the industry were only US$39 billion. Over the next seven years this figure increased nearly twelvefold to reach a maximum of US$472.8 billion by October 2007, while the number of funds also crossed the 3,000 mark by this time.

The industry came under tremendous pressure in the 2008 global financial crisis, with assets declining by nearly 40% between January 2008 and March 2009, due to portfolio losses as well as heavy redemptions by investors. The Eurekahedge European Hedge Fund Index declined by 17.81% in 2008, while total assets declined to US$293.6 billion by March 2009. In the subsequent rebound in 2009 regional managers posted excellent results, gaining 20.26% for the year and attracting some positive net flows. By the end of 2009 the total assets in European hedge funds had reached US$346.5 billion. 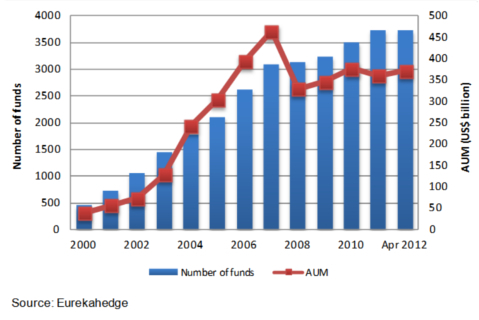 Although present European debt issues had came to the fore by mid-2010, the industry continued to expand with managers attracting assets while also posting healthy gains during the year. In 2011 regional hedge funds once again suffered from significant redemption pressure while also witnessing net declines in performance.