Early estimates put the Eurekahedge Hedge Fund Index return at 7.81% by the end of 2017, and hedge funds are on track to post twelve consecutive positive months in a year for the first time since 1999. Below are the key highlights in the hedge fund industry for the year:

Compared to the massive redemptions seen in 2016, net investor flows were positive across all investing regions, indicating restored investor confidence in hedge funds. The year-to-date inflows for 2017 stood at US$94.7 billion, the greatest yearly inflows the industry has seen since 2013.

As of 2017 year-to-date, long short equities hedge funds saw the largest investor allocations at US$23.5 billion, followed by arbitrage hedge funds with US$16.8 billion inflows. On the other end of the spectrum, distressed debt hedge funds saw US$2.0 billion redemption over the same period. The last quarter of 2017 has been a relatively volatile period for the high yield bond market thanks to tax reform concerns and weak earnings in several sectors.

Billion dollar hedge funds which comprised just shy of 3% of the hedge fund industry population globally took the largest portion of the investor inflows in 2017. Investor allocations were positive across all fund sizes, with US$52.6 billion allocated toward hedge funds managing US$1 billion or more in assets in 2017. Tightening regulations across the industry has contributed to the formation of an environment favouring larger hedge funds in terms of survivability. As regulatory bodies have grown increasingly demanding, the cost of maintaining and ensuring compliance has crept higher. Under MiFID II, which will take effect in just two weeks, small hedge funds might have to cut their research budget or pass the cost onto their investors at the risk of losing business.

Amidst the global trend of declining hedge fund population, Europe has topped the charts for three consecutive years when it comes to fund liquidations exceeding new start-up activity. In 2017 alone, Europe saw 137 launches and 231 liquidations. European hedge funds also tend to have shorter lifespans compared to their peers from other regions. As of 2017, half of dead European funds liquidated within four years after their launches, making Europe the region with the highest turnover rate within the global hedge fund industry.

Net population growth of CTA/managed futures hedge funds turned positive in 2017 for the first time since 2011. Increasing commodity prices and improving performance of CTA/managed futures funds, supported by FX and precious metals might have helped boosting investor interest over this strategy. Furthermore the trend towards quant, machine learning and artificial intelligence based hedge fund strategies have also renewed the interest in the next generation of systematic strategies that are often employed by CTA/managed futures funds. On the other hand, long short equities hedge funds continued to see the sharpest decline for two consecutive years which can be attributed to their population size.

Starting from the end of 2015, the percentage of hedge funds that are below their perpetual high water mark (HWM) has been seeing a trend of decline. Supported by the market rallies in the global equity markets, hedge funds have posted good returns in 2017, as indicated by the Eurekahedge Hedge Fund Index which generated 7.27% year-to-date returns, and is on track to post twelve consecutive positive months in a year for the first time since 1999. The number of funds closing annually has dropped to 555 this year, which is the lowest since the 2008 crisis, indicating that the decline in hedge fund population is slowing down even though closures still outpaced launches over 2017.

Globally, the average performance fees charged by hedge funds that launched in 2017 stood at 17.11%, up from last year’s 16.52% figure and is the highest since 2011. On the other hand, average management fees has declined to 1.26% this year. Funds of hedge funds tend to charge lower fees than hedge funds because of their double fee structure as they invest in hedge funds. However, they are not exempted from the scrutiny on their fee structure. As seen from the tables, average fund of hedge fund fees have declined over the past few years.

The figures shown in the table 1a are considerably lower than the traditional “2-20” fee structure often associated with hedge funds. Increasing competition both from within the hedge fund industry and from other cheaper alternative investment products, combined with the lacklustre performance of hedge funds relative to their pre-2008 crisis performance might have contributed to this pressure on fees. Roughly 42% of the hedge funds that launched in 2017 charge 20% performance fee, but only around 14% charge 2% management fee, indicating the stronger pressure on management fees compared to performance fees.

Table 2: Asian hedge funds rebound on the back of China and India’s performance

Asian hedge funds managed to gain 15.89% over 2017, leaping ahead of their peers from other regions after showing mediocre performance last year, by virtue of strong performance in China and India’s equity markets over 2017. Despite being overshadowed by China and India, Korea’s market also performed well, owing to strong exports in semiconductors. Latin American hedge funds maintained their double digit returns, despite falling behind their 2016 performance supported by onshore fund managers who continued to outperform their offshore competition. Strong recovery in European equity markets have contributed to the European hedge funds’ performance this year, even though they are still behind their peers from Asia and Latin America.

The Eurekahedge Crypto-Currency Hedge Fund Index continued to surge over the last few months of 2017, propelled by the soaring price of Bitcoin and other crypto-currencies traded by these hedge funds. With 204.79% annualised volatility since June 2013, crypto-currency hedge funds ranked among the top most volatile hedge fund strategies tracked by the Eurekahedge indices. It remains to be seen whether the recently launched CBOE and CME Bitcoin futures would put a leash on the crypto-currency’s volatility. 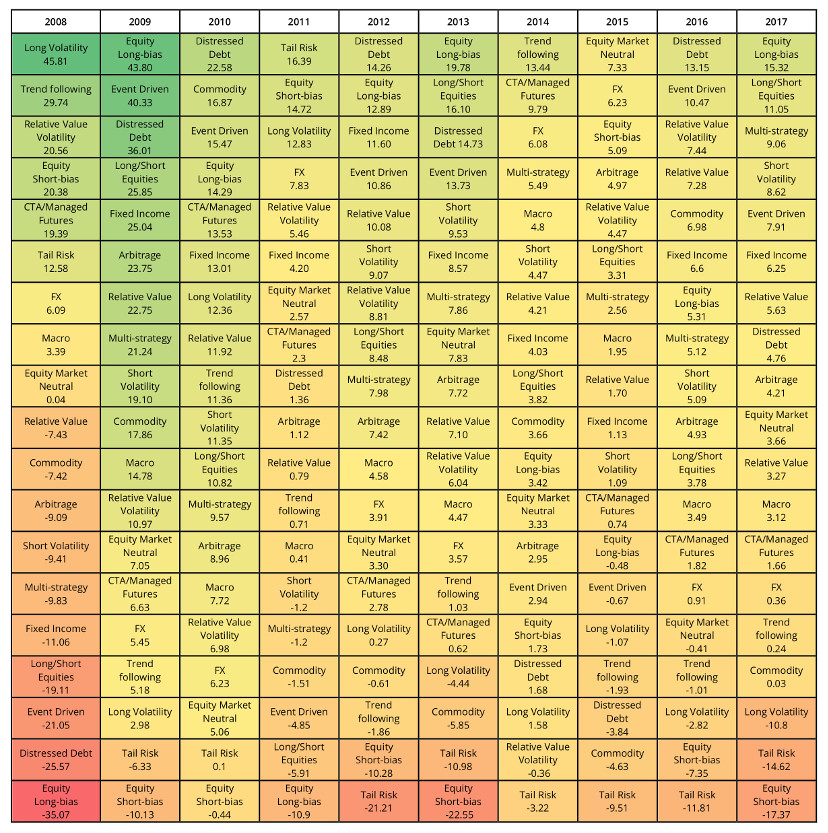 The full article inclusive of all charts and tables is available in The Eurekahedge Report accessible to paying subscribers only.