Hedge funds got off to a running start to the year, with the Eurekahedge Hedge Fund Index rising a handsome 3.2% for the month of January. With the exception of Japan, which had to contend with choppy markets intra-month, all the regional indices returned upwards of 3% for the month. Global investors anticipating an end to the Fed tightening cycle in the near term, spurred equity markets across the board onto healthy gains.

Among key events dominating the month's market scene were concerns over Iran's nuclear programme and attacks on oil pipelines in Nigeria and Russia, sending oil prices up. Another key event was the Livedoor stock manipulation crisis, which hit Japanese equities - especially the small-cap stocks that saw healthy gains in recent months - badly. Traders were further hit by Tokyo Stock Exchange's decision to suspend trading one day to control the overwhelming order volume. This explains the underperformance of the Eurekahedge Japan Hedge Fund Index, which registered early gains but returned only 0.4% for the month, despite relatively positive earnings and economic data. The graph below compares regional hedge fund performance over the last two months and in 2005. 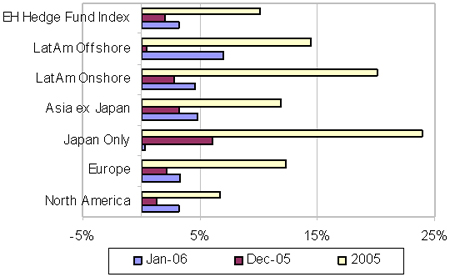 In terms of strategies employed, long/short funds had the best run of the month, returning 4.1% for the month on average on the back of strong global equity markets. Multi-strategy funds benefited from the healthy gains made in conventional hedge fund strategies and had the next best returns for the month at 3.4%.

On the face of it, convertible arbitrage and fixed income funds were the worst performers in the region for the month, but the returns generated are anything but poor. In contrast with the same period in 2005, convertible arbitrage funds started the year on a strong note due to increased volatility and tightening credit spreads. For instance, these funds returned 3.7% for the whole of 2005, but 1.6% in January of 2006 alone. Movements in the global interest rate markets and all round stable credit market ensured that fixed income players were in positive territory. The following graph looks at recent performance of the various Eurekahedge strategy indices. 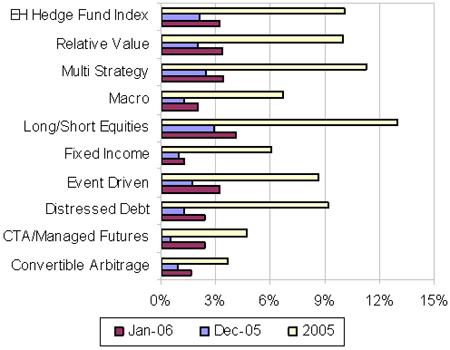 This section takes a closer look at trends in hedge fund performance in each of the following key investment regions:

The North American equity markets kicked the year off with a rally (the S&P Index was up 4.5%), on the back of positive policy (Fed minutes suggesting an end to the tightening cycle) and economic (employment report) indicators. This also boded well for most equity markets in Europe and in Asia, particularly in Hong Kong. Consequently, equity long/short hedge funds had the best returns for the month in the region, with the corresponding Eurekahedge index rising 4.1% (see Figure 3 which compares strategy-wise returns in the region). Other directional strategies such as macro (+3%) also benefited from these market movements.

Event-driven funds, up 3.6% for the month, continued on a trend seen in the past few months, on the back of strong deal flows. The month saw several competitive bidding situations with bids revised upwards. One example is the ongoing consolidation in the steel industry: the world's largest steel maker Mittal Steel bid 18.6 billion euros (US$ 22.8 billion) in the last week of January for its biggest rival, Arcelor. In a related transaction a week before, Arcelor won a US$ 4.9 billion hostile bid for Canadian steelmaker Dofasco Inc over another European firm, ThyssenKrupp. Mittal Steel said it has also reached an agreement with ThyssenKrupp to sell Arcelor's Dofasco shares. Talk of a bid for Arcelor sparked off a global rally in steel stocks, with most shares rising over 8%, including India's Tata Steel. Another instance of opportunities for event-driven managers was the increased bid by Boston Scientific for Guidant Corp, a medical device maker, in a bidding war with Johnson & Johnson. 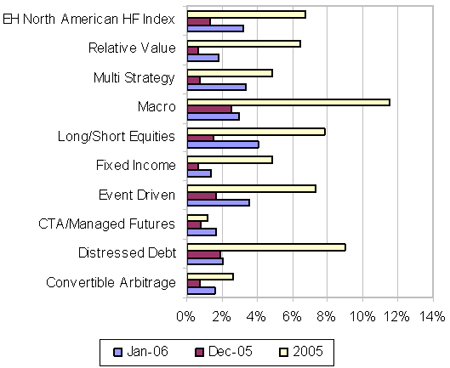 CTAs had mixed results, returning 1.7% for the month, in the face of continued high oil prices, weather-related issues and the resultant volatility in the markets.

Going forward, however, the near-term outlook for the region might be dampened by the Fed's rate hike to 4.5% and statements to the effect that further policy tightening may be needed, given the market's continued pre-occupation with inflationary concerns. Also, there has been a steady rise in the US 10-year notes (which closed January at 4.5%) and the August 2006 Fed fund futures rate as at end January has factored in an 80% probability that the Fed will follow through with two more rate hikes before ending the tightening cycle.

The strong performance of the European markets in the last months of 2005 continued on into January, on the back robust economic forecasts, positive earnings data and continuing demand from foreign investors. The UK FTSE 100 rose 2.5% for the month.

Aside from multi-strategy funds which benefited from rising markets in most conventional hedge fund asset classes, the best performers for the month in Europe were long/short funds which rose a stellar 3.7%. The month also saw a lot of activity in the fixed income space with a rapid steepening of the yield curve, especially at the long-end, with overall spreads moving up by 15 basis points. Relative value managers were able to generate meaningful returns in this environment, benefiting from the rising credit markets and cross country spreads. 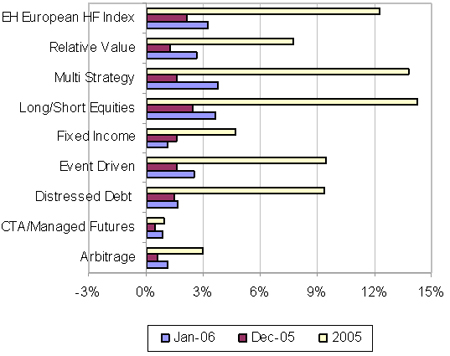 The reversal of energy price movement back in the positive direction in January coupled with a recovery of the US dollar from a low base on expectations of a Fed rate increase going into the summer of 2006, hit CTA/managed futures managers who returned 0.9% for the month.

Going forward, the ECB tightening cycle could have a dampening effect on the markets. Having said that, the catalysts for corporate earnings and valuations remain fundamentally strong, spelling a good year ahead for European hedge funds.

Japanese hedge funds had a rough month in January as the markets had to cope with a stock manipulation crisis and a day of suspended trading in order to control order volume. The arrest of the Livedoor group founder on charges of stock price manipulation through falsified accounts and 'window dressing', sent the markets sharply southward mid-month. The MSCI Japan Index did rise 4.2% for the month but the intra-month uncertainty precluded managers from exploiting the upside as markets bounced back towards the end of the month.

This heightened volatility has affected performance across almost all strategies. Long/short hedge fund managers were the sole exception for the month, returning exceptional returns of 5.6%. These managers clearly benefited not only from rallies towards the beginning and end of the month, but also from more shorting opportunities in markets that were not consistently bullish. 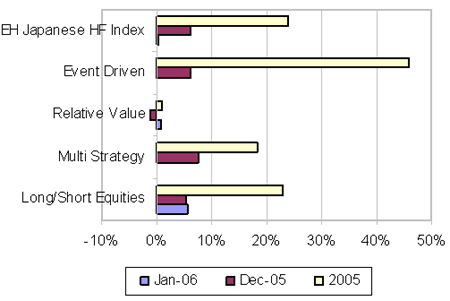 The end-of-the-month rally in the Japanese markets was driven mainly by a return of investor focus to Japan's rapidly improving fundamentals, on the corporate front (Sony reported record quarterly results a week after the scandal broke out) as well as the macro-economic front (2005 fourth-quarter GDP grew at an annualised 5.5%). The near-term outlook for Japan still remains bright.

All major Asian equity indices ended the month in positive territory, with the exception of Taiwan. Also, smaller Asian markets performed strongly, with Thailand gaining 12.6% and Indonesia, 11.3%. Not surprising then, that the MSCI Asia ex-Japan Index rose 7% during the month, the best monthly return since November 2004.

Elsewhere in the region, the Indian markets had yet another month of robust performance, adding another 7.8% to the S&P CNX Nifty Index. 2006 GDP growth forecasts have been revised upwards to 8% and 2005 third-quarter corporate earnings data, at 22%, have beaten forecasts by four percentage points.

Australian equities started the year on a high-note with the S&P/ASX 200 Accumulation Index rising 3.5% for the month. Rallies in commodity prices, particularly oil and metals, further assisted market performance.

China and China-related shares registered solid gains, hinted at in our last review, with the Shanghai A-share Index gaining 8.1%.

In contrast, Korean equities recorded relatively modest gains, with the KOSPI rising 1.5% for the month, after withstanding mid-month corrections. The Livedoor crisis, disappointing guidance from US tech stocks, and rumors of a proposed capital gains tax on trading profits, have affected market movements.

Amidst these bullish equity market trends, long/short funds had a rather good run for the month, returning a whopping 5.5% for the month. Event-driven funds in Asia too (+3.2%) benefited from competitive situations in the M&A space. For instance, the Gulf state-backed Dubai Ports World is in a bid war with Singapore's PSA International for the UK ports group P&O. (Dubai Ports World eventually won the battle in February with a US$ 6.9 billion bid). 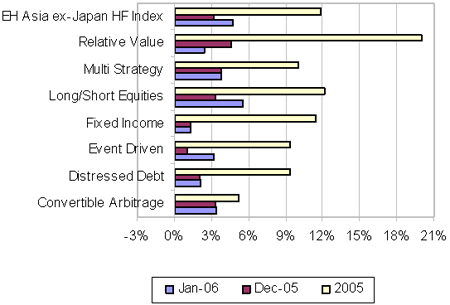 Fixed income managers found themselves on the other end of the return scale, returning 1.3% for the month. Although the Asian credit markets began the year on a strong note with substantial liquidity pumped into the global high yield and emerging markets, price performance was subdued as gains on the credit front were cancelled off by losses on the treasury side of the equation.

The fundamental outlook for Asia in 2006 is strong, and is supported by the continued strength of regional markets such as China and Japan. There is an increasing demand for volatility products both by regional and institutional investors, promising an increased number of opportunities for hedge fund managers both on the long and short sides.

Latin American equity markets saw by far the sharpest rallies for January 2006, with the MSCI LatAm Index recording double digit growth at 16.9%. This strong rally was driven by large inflows of liquidity into the markets on the back of continued optimism regarding the pricing of key commodities such as oil, iron ore, energy and copper. This improved outlook has had a favourable effect on sovereign debt, compressing spreads to record lows.

In Argentina, bond prices recovered sharply after the December coupon was paid and economic indicators continued pointing towards strong growth.

In Brazil, the markets are seeing increased intervention in the FX market by the Central Bank, in order to consolidate the positive effects of the bullish trends. This has increased foreign reserves, reduced Brazil's sovereign debt in dollar terms and has helped the Brazilian real appreciate. This has had positive spillover effects on other macro-economic aspects such as employment, inflation and earnings.

In the wake of this wave of optimism, both the onshore and offshore Eurekahedge LatAm indices returning solid gains at 4.6% and 7.1% respectively. In terms of strategies, equity long/short funds were understandably the best performers in both cases. Investments in energy and commodity related stocks particularly paid off. Onshore funds also benefited from the bullish trends in commodities.

On the negative side, onshore fixed income managers are finding limited opportunities in the mainstream fixed income space, with Brazilian and Argentine bonds already trading at high prices. There might, however, be more room for relative value trades. 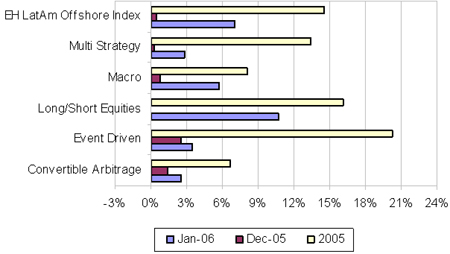 Sustained growth in key Asian and European economies spells good news for Latin American commodity and asset prices in general in the year ahead. Valuations still look attractive in the region, and short-term corrections are only good reasons for buying assets at a discount. Also, elections in the region may cause market volatility in 2006.

On a summary note, the year started off on a very positive note in January with bullish markets in global equities and key commodities, more liquidity flowing into the emerging markets, and positive earnings and economic data in most regions. While it is only prudent to expect short-term corrections in such an environment, the long-term outlook for the year ahead looks bright indeed. We expect long/short and special situations funds to do well in the coming months.

Please visit ../indices for a daily update on Index returns for February.