The composite Eurekahedge Hedge Fund Index fell 3.1%1, posting one of its worst monthly returns in the last several years. The rough start to the year came about as hedge funds across the board had to contend with margin calls amid steep declines in global equities; the MSCI World Index shed 7.7% on the month, with major regional equity indices posting similar losses (Topix -8.8%; S&P 500 -6.1%; FTSE -8.9%; MSCI Emerging Markets -12.6%).

In terms of regional hedge fund mandates (refer to graph below), North American managers (-1.6%) posted relatively smaller negative returns despite mounting concerns over recession, as healthy gains in short positions in equities and currencies offset some of the losses from other allocations. Market conditions in Europe were choppy as well, but were exacerbated by the turmoil at the French bank Societe Generale involving rogue trading; the Eurekahedge European Hedge Fund Index was down 2.4% on the month. Emerging market-focused managers, however, were the most adversely affected (-6%), as large losses in regional equities in Emerging Asia and Eastern Europe, took a toll on performance. 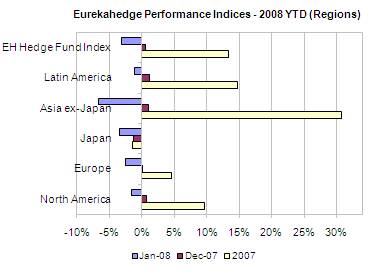 The sharp decline in equity prices across the board was a product of persisting uncertainty in the underlying markets in recent months given tightening credit conditions, a slowing US economy, mounting recessionary fears, ongoing housing/subprime woes and shrinking liquidity (despite aggressive rate cuts from the Federal Reserve).

Falling equities and lower US interest rates gave a boost to ‘flight to quality’ plays such as long positions in sovereign debt, and fixed income prices finished the month higher. The US Treasury 10-year Note yield fell 37 bps to finish the month at 3.96%.

In the currency markets, the combined 1.25% Fed rate cut in late January narrowed interest rate differentials and exacerbated the weakening trend in the US dollar against major currencies such as the euro and the yen.

And lastly, energy prices too were affected by data pointing to a slowing US economy; crude oil prices ended the month lower (US$91/barrel) in anticipation of falling demand. Natural gas prices, on the other hand, saw choppy trading during the month as a drop in supplies was countered by speculation that recessionary fears may temper demand despite forecasts of colder weather.

These broad market trends provide the basis for explaining the performance of various hedge fund strategies during January (refer to graph below). A detailed, region-wise analysis of the underlying factors driving the month's returns is taken up in the following sections of this write-up. 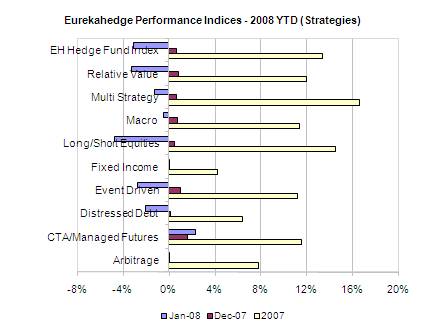 Equity markets in the region remained markedly volatile in January, especially during the first half of the month, amid a steady flow of negative data such as rising housing foreclosure rates and mounting subprime related losses at major investment houses (Citigroup, Merrill Lynch, to name a few), which added to ongoing uncertainty in the markets. The Fed’s aggressive rate cuts (0.75% in the third week, followed by a 0.5% cut on 30 Jan) could offer only a brief bullish respite. Turmoil at the French bank Societe Generale involving rogue trading, and the ensuing unwinding of a US$72 billion trading position also adversely affected the futures market.

Equity long/short funds were understandably hit by these market movements, and were the poorest performing strategy in the region during the month (-3.6%). Reduced trading activity and well-timed shorting cushioned some of the month’s drawdown.

Opportunistic strategies such as event driven (-3.3%) and distressed debt (-3.2%) had a similarly poor month, with funds hit by slowing deal flow, dwindling volumes in the high yield market and, in some cases, redemptions.

Fixed income was among the very few strategies in the region that generated positive returns for the month (1.1%), assisted by rallying treasury markets, widening credit spreads and heightened volatility; volatility-centric and credit hedge positions worked well during the month.

But the month’s best gains came from CTA/managed futures funds (4.9%), with short exposure to the US dollar (given narrowing interest rate differentials) and long exposure to precious metals, paying off. 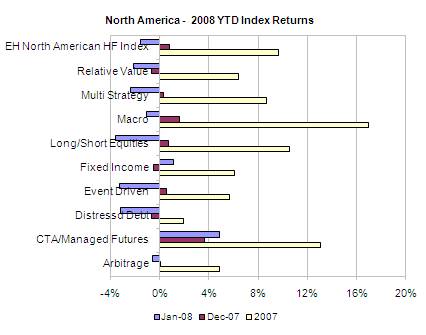 Fears of the US economy running into a recession, coupled with heightened investor risk aversion and domestic factors – such as large losses at French bank Societe Generale (owing to fraudulent trade) – were some of the factors that took a toll on the European markets in January. Equities remained volatile, and after rallying from their intra-month lows (owing to the Fed’s aggressive rate cuts, one of which came as a sudden surprise), closed the month down nearly 9%. This is clearly reflected in the performance of European long/short equity managers, who put up an average loss of 2.9%, as some managers made healthy gains from short positions across equities, while most long-trades resulted in losses.

Other loss-making strategies during the month were multi-strategy (-2.8%) and event driven (-1.3%). Both multi-strategy and event-driven managers were largely affected by the notable decline in equities, among other things. Some obstacles on the special situations front also went some way in making the month difficult for event-driven managers. For instance, Carlsberg’s takeover bid (along with Heineken), for the British brewer Scottish & Newcastle caused a decline in Carlsberg’s stock price, owing to technical (financial) complications. Arbitrageurs finished the month flat (-0.2%), as the high intra-month volatility partly worked towards affording them with decent opportunities during the month. 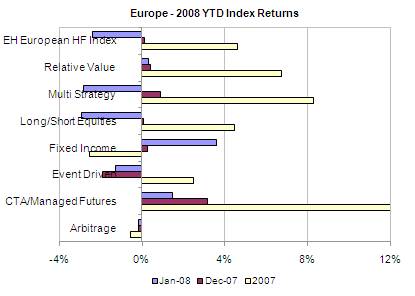 CTA managers, however, made healthy gains in January, registering returns averaging 1.5%, as trades in currencies (the euro advanced 1.9% against the US dollar) and commodities (as precious metals saw double-digit gains) were profitable during the month. Relative value players finished the month up 0.3%, as quant funds succeeded in capital protection, while trades in the energy sector proved profitable.

Japan-focused managers outperformed their Asia ex-Japan investing counterparts by over two percentage points in January, as the Eurekahedge Japan Hedge Fund Index finished the month down 3.4%. These losses were suffered on the back of high volatility and large declines across equities. The weak performance of export-centric stocks (due to fears surrounding the possibility of a recession in the US), the appreciating yen and the downgrading of monoline insurers adversely impacted the equity markets; the Nikkei shed 11.2%, while the Topix was down 8.8% during the month.

In terms of strategic mandates, long/short players registered losses averaging 2.7%, as short positions across equities offset a portion of the losses suffered from long-plays. Multi-strategy managers finished the month down 1.6%, as in addition to shorts in equities, currency trades (the yen rose by 4.8% against the US dollar) and shorts in Japanese Government Bonds helped to negate some of the losses suffered from other allocations. The average performance of event-driven managers was pulled down by an index constituent that was largely impacted by the drawdown of equities; the regional index for the strategy lost 3.1% during the month.

After registering solid returns (in excess of 30%) in 2007, the Eurekahedge Asia ex-Japan Hedge Fund Index finished the month of January 2008 down 6.6%, suggesting a rough month for hedge funds allocating to the region. A considerable portion of the index’s drawdown during the month can be attributed to the performance of equities across the region; the Eurekahedge Asia ex-Japan Long/Short Equities Hedge Fund Index shed 8%.

In terms of regional mandates, Indian hedge funds registered the worst returns, averaging -11.5%. This was largely due to the decline in equities seen during the month – the BSE Sensex lost 13% over the month, as, among other reasons (such as weak global sentiment and heightened investor risk aversion), domestic players were forced into unwinding their F&O positions due to margin pressures. Besides this, the diversion of funds into large public issues also went some way in accentuating the declines. The weak performance of equities was reflected in the returns of long/short managers, who finished the month down 13.4%. 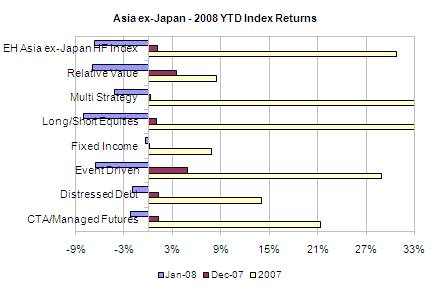 Funds allocating to Greater China had a difficult month too, and were down 8.3%. As in the case of India, equities were a major cause for poor fund performance across China; the Shanghai Composite Index closed the month down 16.7%, due to slowing global growth and credit tightening. Fierce winter storms across the mainland also partly affected stock performance. Against this backdrop, long/short managers were down 8.9% on the month, while multi-strategy managers were down 6.8% (as currency trades against the US dollar proved profitable, since the yuan appreciated by 1.75 against the US dollar during the month).

Australia/New Zealand-focused managers were the least negative across the region, posting returns averaging -5.8%. Equities in Australia, which were down mainly due to concerns about the possibility of a recession in the US, had their worst month in nearly two decades, witnessing an intra-month decline of 20% in January. Australian equities finished the month down 11.3% (after rebounding from their intra-month lows, following the Fed rate cut of 125 bps during the month), while those in New Zealand were down 9.2% on the month. Against this backdrop, long/short managers were down 6.6%. CTAs lost 2.2%, despite a 2.3 and 2.7 percentage point gain in the Australian and New Zealand dollars against the US dollar respectively, as one index constituent with almost 100% exposure to the Australian electricity sector, negatively skewed the average performance of the strategy. Event-driven and multi-strategy managers were also down (-2.6% and -7.3%) largely due to the poor performance of equities.

Latin American hedge funds were among the best performers in January, as the Eurekahedge Latin American Hedge Fund Index fell by only (as compared to losses seen among other regions) 1.1%. The only strategy to post negative returns was long/short equities, which ended the month down 3.6%. This was on the back of high volatility and wide swings across underlying equities; the MSCI (Emerging Markets) Latin America Index, after having fallen in excess of 20% as at 21 Jan, rebounded to close 6.4% lower than its Dec-07 close. On the whole, long positions in equities across the region resulted in losses, while shorts yielded some gains. 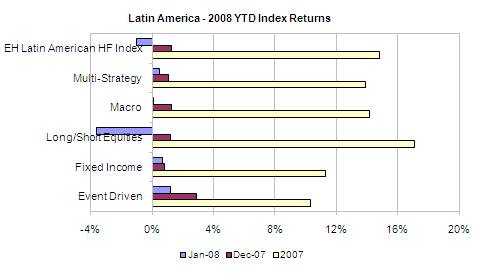 Among other strategies, fixed income players returned a decent 0.7%, benefiting partly from a steeper yield curve (particularly in Brazil). Multi-strategy managers were up 0.5%, as, apart from some shorts in equities, currency trades helped to offset some of the losses suffered from other allocations (as the Brazilian real and the Columbian peso gained 1.2% and 3.9% against the US dollar). Event-driven managers posted healthy gains during the month, returning 1.2%, as trades in the telecom, mining and transportation sectors proved profitable for managers of the strategy. Macro managers (-0.01%) fared absolutely flat, during the month.

Looking ahead, fiscal and monetary measures taken by the US government and the Federal Reserve in the last month in an effort to avoid a sharp economic slowdown have yet to be proven successful, and it is very likely that markets will continue to be volatile in the coming months.

That said, our near-term outlook for hedge fund performance remains positive. Managers re-adjusting their portfolio allocations to reflect the current uncertainty in the markets are being cautiously optimistic, and pockets of opportunity continue to exist. For instance, from an asset selection standpoint, sectors that are ‘leading’ indicators of market health (for example, financials) have borne the brunt of market corrections during the last six months, while ‘lagging’ indicators (for example, materials stocks, which could be adversely affected by lowered profitability and reduced capital spending) are currently valued relatively highly. Selective long/short or arbitrage bets in this example, could prove profitable.

2 The Eurekahedge Japan Hedge Fund Index is a separate index and derives its value not only from the actual performance of the listed strategies for the investment region but also from the strategies which are not listed (due to strict Eurekahedge indices guidelines) but having the same investment mandate.