March was a difficult month for hedge funds across the board, with performance-based declines in assets among most strategies and redemptions in some; the composite Eurekahedge Hedge Fund Index shed 1.9%1.

March assets under management (AuM) data from early reporting funds to the Eurekahedge databases suggests that hedge funds globally shed their total assets to the tune of US$5.1 billion in performance-based declines, but were almost fully offset by net investor inflows of US$4.7 billion. As a result, the net change in month-on-month industry total assets was marginal, and is estimated at US$1,648 billion2 at the end of 1Q2008. Asset flows year to date are summarised in Figure 1 below. Performance-based flows during the month were a reflection of persistent concerns on the slowing of global growth and the likelihood of a recession in the US, heightened volatility across the underlying markets (particularly prior to the Fed’s 75 bps rate cut on 18 March) and weak credit markets. 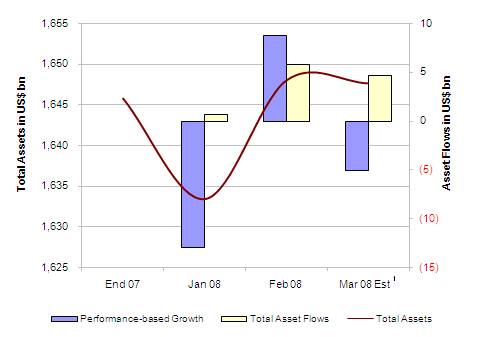 In terms of regional hedge fund mandates, North American and Emerging Asian funds saw the biggest performance-based declines in assets (US$2.7 billion and US$1.2 billion respectively), with the bulk of the declines coming from larger-sized funds (US$300 million or above) and/or those allocating to the regions’ equity markets (both in long-only and long/short strategies). This is evident from a comparison of region- and strategy-wise asset flows in Figures 2 and 3 below. The month’s losses came mainly from long exposure to high-yield debt (as credit spreads widened significantly) and equities (given the sharp drawdown across equities in Hong Kong, China and India).

However it should be noted that North America was the least negative regional hedge fund mandate during the month, with decent gains from bets against the US dollar and from short positions in equities. The Eurekahedge North American Hedge Fund Index was down 1.1% for March, in contrast to the Asian (-3.3%), Latin American (-3%) and European (-2.6%) indices. In relative terms, assets in North American managers saw only a 0.25% decline on the month, while those in Asian managers were down 0.9%. 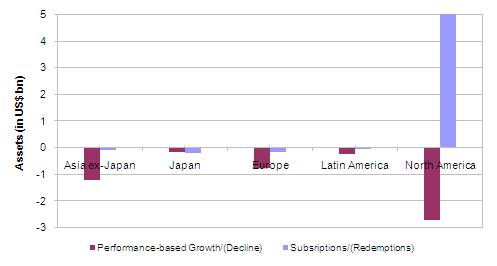 On the other hand, net asset inflows during the month (to the tune of US$5.2 billion) were directed mainly towards North American allocations, and more specifically to commodity-based and event-driven strategies. While interest in CTAs is largely owing to their impressive performance in recent months (the Eurekahedge CTA/Managed Futures Hedge Fund Index is up 8.6% for 1Q2008, while the North American component is up 12.6%), the net inflows into event-driven strategies support the view that valuations across most equity markets have become attractive, and that the markets afford volatility-driven pricing inefficiencies in the short run. Case in point, financial company stocks have been under added pressure given recent big-name news such as JPMorgan Chase’s buyout of Bear Stearns at a deep discount and Carlyle Group’s liquidation of its mortgage bond fund, and earnings expectations for 1Q2008.

This is in step with our own outlook for the hedge fund industry in the near term. On the macroeconomic front, most market participants have already given in to the fact that a recession in the US economy is imminent. However, the question that still remains is, how much more of the slowdown phase is yet to be seen, and more importantly, how much of an impact it will have on the global economy. As investors look for better risk-adjusted returns in these rough and uncertain trading conditions, we expect a rise in asset flows into market neutral and opportunistic strategies, and into less risky assets.

2 These are preliminary estimates based on about 60% of Mar 2008 AuM data reported to the Eurekahedge databases as at 15 Apr 2008.