The year has been exceptionally volatile not only for equities but also for the VIX itself fluctuating between 13% and 24% since the start of 2016. We believe the volatility is a result of bond investors driven to chase risk and yield in equities.

2016 will be dominated by macro challenges to policy makers and we believe the recent choice by central bankers in Europe, China, Japan and the US to maintain accommodative monetary policies implies that they are forecasting a deep recession in the coming year. From our perspective there are three key unintended consequences (or intended) of QE that is beginning to haunt the equity markets globally.

The first unintended consequence is that most of the major financial institutions globally now have relatively healthy balance sheets compared to 2009. That said, most institutions are more levered than ever before from a dollar-to-dollar basis to take advantage of zero interest rates. The high leverage has in turn caused any rate hike to be more stressful on corporate balance sheets than ever before.

The second consequence is that the valuation in the bond and equity markets are both very stretched from any historical perspective (as at Month Year, the SPY is trading at 17x forward earnings with record low bond yields as well). We view this as a reflection of monetary policy driving bond prices higher (QE) and subsequently forcing bond investors to allocate more to equities due to fear of over valuation in bonds. The only remedy is a severe correction or a normalisation of rates in the coming year. Some sub sectors like biotech have given us a prelude to what could happen when bubbles burst.

US Bond funds have seen US$9.8 billion outflow in the first quarter alone

Unlike in the past where the US consumers continue to consume, we believe that they will tighten their purse. In addition to the consumer slowdown, so will the demand from the enterprise due to operating profit contractions.

Despite a slight reduction in inventory from record levels in Q1, inventory is still above normal levels across the supply chain

With the continued inflow from bond investor in equities, the valuation in large cap tech has continued to stay at an elevated level compared to historic comparisons. This greater fool style of investment from insurance and pension money is difficult to push back against but along with the share buyback, large cap tech stocks will continue to see their liquidity decline and volatility increase.

Apple has caused a shift in economic profit from semi and communications equipment into tech hardware. We believe this trend has reached an inflection point in 2016. 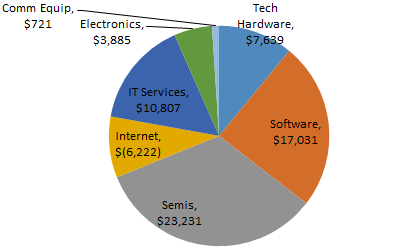 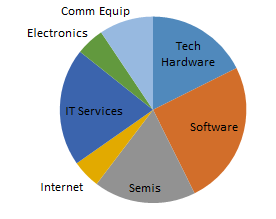 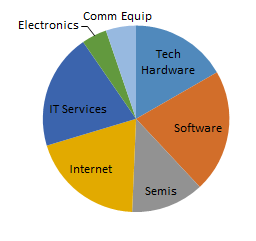 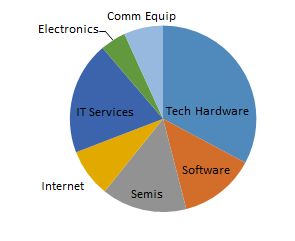 Apple is still the largest tech name in most portfolios which causes poor results to be met with a wall of arguments of why one should hold on to the stock. Our view is that there is really no reason to buy it outside of the dividend pay-out, which is less than 3%. The structural slowdown in smartphones is becoming more obvious as even Apple’s 0% leasing plan could not stimulate replacement in the US in 4Q. We believe that Apple will be losing share consistently to higher quality yet far cheaper local competitors in the coming years as they find it increasingly difficult to differentiate their product.

Replacement rate for iPhones is tracking the historic decline of PCs 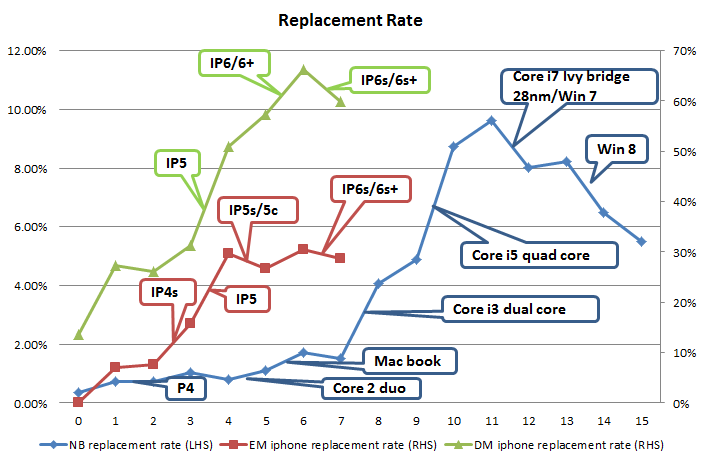 Solar cell demand has hit a near-term peak in Q1

The subsidy policy in China changed at the end of March. This caused a very strong pull in build in the fourth quarter of 2015 and first quarter of 2016 and will have a two-to-three quarter impact on the supply chain in 2016 as demand and ASP weakens into June 2016 and beyond.

Given our near term view on solar, we jettisoned our solar holdings in January and will be looking for opportunities to buy back the shares when they become more distressed.

Internet of the car

This continues to be our favourite small cap theme in the portfolio. The market cap of Tesla and the penetration of electronic in automobile are still at sub 10% in unit terms. We have begun to build out our coverage of the names globally in this theme. The value adds and replacement cycle will accelerate meaningfully in the coming years. 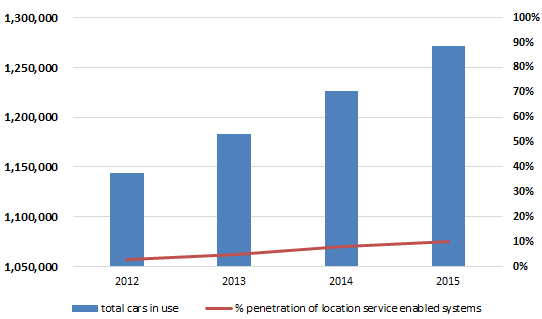 Founder and Portfolio Manager of MMA Pan Asia Fund I, Tom Lin has extensive experience in the Asian equity markets as an analyst, investor, and an investment banker. Prior to founding the firm, Mr. Lin managed and launched technology equity sales units for Merrill Lynch, Lehman Brothers, and Deutsche Bank, as well as held a sector analyst role at Anthion Capital. Mr. Lin lived and worked in both Taiwan and Hong Kong for a combined 20 years.