Asia is currently reaping the benefits of being the developed world’s emerging market of choice, with new billion-dollar funds, and now, big deals to match. Yet the Middle East, driven by a combination of rising oil prices and internal reform and revitalisation, is equally in the spotlight as a new cluster of high-growth economies. Add the fact that several of Asia’s prime investment destinations – especially India – are positioned to tap the dynamism in both regions, and there seems plenty of cause to link the two together. PEAsia talked to experts in both regions, for perspective on the new Middle Eastern/Asian private equity connection.

Private equity in the Middle East has recently been overshadowed by the explosive performance of the region’s public markets. Funds in the region faced the quandary posed by Jonathan Hall, Senior Vice President at Abraaj Capital, that “if you can get 3x your money in an IPO, why would you put money in private equity?” PEAsia’s sources in Dubai emphasised that less interest was paid to private equity over the last three or more years due to the attractions of the stock market.

However, the same sources, prior to the sudden crash in Middle Eastern bourses earlier in March, were already anticipating a large correction in the markets. The prevailing opinion was that interest in private equity was poised to revive as soon as the correction happened. One notable finance house remarked that a lot of money had been directed to the recent spate of IPOs, but that many of these were for “low quality” companies without real revenues, in a speculative bubble similar to the dotcom boom.

When it came, the wakeup call was loud and clear, with the Saudi stock market falling around 20% in one week, and others following its fall. “Our view is that the public markets are probably overvalued in terms of where they stand at the moment,” Hall told PEAsia prior to the correction. “We’ve been very public in our view that that level isn’t sustainable.” Amid talk of government bailouts for some investors, the Middle East now has an object lesson in the merits of diversification.

Some commentators are already predicting that, “the excellent business fundamentals of the region are still in place, but investors will probably now switch to other asset classes such as real estate, private equity, hedge funds, foreign equities, foreign exchange and gold.” There are other signs that the crash may be bringing benefits in its wake: immediately after, the Dubai government passed long-awaited measures legalising real estate ownership for foreigners.

Some local investors appear complacent, or even in denial. “The correction is almost over, I think; in the worst case it will lose another 5%,” one told PEAsia. “But we are waiting for the government to say something to cool the market.” Another analyst remarked that “valuations are looking attractive and the market has bottomed out.” However, others take a far less rosy view. The independent Gulf Research Center warned that “the markets are exposed to severe risks after years of relentless appreciation.” Speculation also points towards a slide in real estate prices, despite the opening of the market in Dubai, which some see as an attempt to shore up valuations. Either way, the stage seems set for private equity’s return to favour.

Inherited clichés from the 1970s of relatively unsophisticated Middle Eastern investors should be unlearned quickly. “To put it in context, the Middle East has always been a very significant investor in the asset class and has been a huge source of capital for GPs in Europe, North America, and to a lesser extent, Asia,” points out Alan Hyslop, Senior Vice President at Dubai International Capital. “A lot of our LPs, certainly on the institutional side and the larger institutions, follow fairly sophisticated diversification policies,” concurs Hall. “The institutions that we deal with are really quite sophisticated. It’s been a long time since petrodollars were flowing in any random manner.”

As PEAsia has observed in the Gulf, Middle Eastern institutional investors and HNWs are now not only as savvy and well-informed as their Western counterparts, but are also every bit as ready to evaluate new investment trends – such as Asia – on their merits. They are in a different league to the relatively lower-level retail investors who drove the recent Gulf stock market bubble, and who often borrowed heavily to invest.

“A lot of investment is really driven by the attractiveness of potential returns as certain markets open up,” notes Hall. “The US and Europe are very mature in terms of private equity, their pricing is getting competitive. You really have to be one of the best established players. The returns are still there but they have to work very hard for them. Asia and the Middle East probably still offer opportunities where there is good pricing potential, information asymmetry, you can get involved in potential transactions very early on, and find exclusivity.”

Some local investors maintained a surprisingly high level of private equity allocation, especially amongst HNW individuals and family offices. PEAsia found several investors who claimed that their allocation to alternative assets was 40% of their portfolio, and even 70% in one or two cases. Others are hungry to know more about the asset class. “People want to understand more: how does it work, how does it relate to the public markets, how are the returns different, how involved can they get,” says Hall. “Once these new structures and new possibilities come along, once it becomes clear what benefits they’re offering, people are very responsive.” 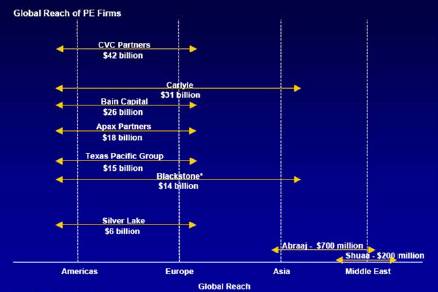 Local Opportunities and the Return of Capital

Domestic opportunities are one of the major focuses of the Middle East’s growing private equity sector – as well as the increasing return or retention of capital within the region. “Oil is a big driver,” notes Mumtaz Khan, Chairman and CEO of Bahrain’s Emerging Markets Partnership, but he adds, “the relocation of capital out of the West and back into the region is the second piston that is operating now.”

Hall sees the much-touted homecoming of the Middle East’s capital as strategic rather than reactive. “Everyone talks about the return of capital post-9:11, about $10-15 billion in terms of what came back from overseas. I don’t think everyone saw it as a massive return of capital in any panic. A lot of the investors are very sophisticated.”

Significantly, he adds, “you’re seeing capital generated from the higher oil prices and economic growth within the region staying within the region rather than going abroad. That’s where you’ll see a lot more of the liquidity.”

Investment decisions of this kind are clearly being driven by opportunity sets, as much as political differences with the US and Europe. Developments in the oil sector are one significant aspect, according to Khan, as the Middle East evolves from a basic primary producer to a more sophisticated trader and processor of the resource. “The industry is relocating out of the West,” he notes. “There’s a strong impetus to go downstream. All of those things begin to find a home for all the money that’s coming back.”

“In recent years some of this capital has been allocated to an emerging group of regionally focused GPs,” adds Hyslop. “I suspect the recent correction won’t have much impact on the allocations of those LPs already in the asset class. However, others may now see private equity as a better way to access regional growth.”

The capital flow is by no means one-way, though. While we are raising money from here, we are investing it both here and in Asia. We are receiving a lot of interest from Asia, and taking Asian capital and putting it into this fund. You see Asian capital coming to take advantage of some of the opportunities in the GCC,” says Khan. “We are also talking now about looking at Asian companies that are looking to expand geographically into the Middle East.” 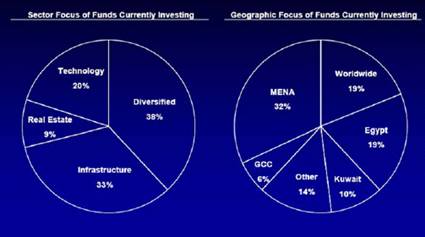 Longstanding cultural and business ties, as well as political realignments, may prompt some of the new allocations. China’s petrodiplomacy to fuel its economic growth is one example. Much of the movement is clearly just driven by returns. “There is a very strong Middle East to Asia connection,” says Khan. “That is sort of a bridge on which there’s a lot of traffic moving both ways. It’s becoming clearer by the day.” And he adds, “the very perceptive investors are already looking to Asia to make big profits.”

One factor in the growth is the proverbial emerging markets story that things are expanding fast off a relatively small base. “Asia and the Middle East have a relatively low level of trade, particularly if oil is excluded.” Hyslop points out. “The same is true with the Middle East and other economic areas. However, the level of trade and connectedness is increasing, both inbound and outbound. Governmental relationships are getting closer, particularly given China’s need to secure long term oil imports, while Asian construction firms are playing a key role in the boom in Middle Eastern construction and infrastructure.”

Khan highlights the breadth of opportunity, “we have an Islamic development bank infrastructure development fund which has raised money from people in the region here. We’ve successfully taken it into projects into Asia, Malaysia in particular. I see opportunities where there is Middle East capital buying real estate in Singapore. I also have been instrumental in bringing hotel groups from Asia into the Middle East.”

Actual examples noted by PEAsia in Dubai include Shamil Bank’s China-focused real estate investment vehicle with CITIC Investment Asset Management and Hupomone Capital Partners. Dubai Bank’s reported initiatives into Asia and Addax Bank’s investment fund for Pakistan are further examples. Governments are also getting involved in the process. “Malaysia has a major program to penetrate the region,” says Khan. “Singaporeans are looking to lead Middle Eastern money into China via Singapore. The linkages are here.”

Enthusiasm and strong motivating factors should not disguise the lingering problems in doing private equity investment over this so-called Middle East/Asian bridge. “These things are very much possible and doable,” says Khan. “What is absent is that there are not enough people in Asia with knowledge of the Middle East and vice versa. It is that kind of person who can traverse both sides easily who can generate a lot of opportunities.” And many commentators feel that the Middle East needs to attract more experienced private equity professionals, whether for domestic or international investment. “There are still probably very few funds: 20-25 established or in process of being raised,” remarks Hall.

Middle Eastern investors have been testing various structures to access Asian opportunities. These include: as a GP without a partner, as Al Noor Capital appears to be doing; as a GP in partnership with another experienced GP – as Istithmar and 3i or Shamil Bank and CITIC have done; or going the fund-of-funds route, as the Gulf Investment Corporation has done.

“Any private equity investor seeking to gain exposure to a market with which they are not familiar would be well advised to either take their time to acquire knowledge, or work with those that already have that knowledge, eg funds of funds or gatekeepers,” cautions Hyslop, in a warning that covers both the Middle East and Asia. “This is particularly important in emerging markets, where the lure of high GDP growth can lead to investors overlooking the poor investing infrastructure and lack of established managers.”

This article first appeared in the May 2006 issue of Private Equity Asia.