Within the equity risk sub-module of the third Quantitative Impact Study (QIS3) undertaken by the Committee of European Insurance and Occupational Pension Supervisors (CEIOPS), a preamble to the Solvency II supervisory standard, all alternative investments are subject to a capital charge of 45%, nearly 50% higher than the 32% applied to regular equity exposures.

In this article, we will briefly go over the calculations required for equity risk, and then include a reminder of why hedge funds on average are certainly not the riskiest bet an investor can make.

The main features of the equity risk sub-module are as follows1 :

In practical terms, this means that all hedge funds with positions that cannot be looked-through or which are managed dynamically rather than protected with listed 1-year put options will be subject to a 45% capital charge.

EDHEC’s work clearly shows that this capital charge is totally inconsistent with the real risk profile of hedge funds. Indeed, hedge funds as an asset class are far less risky than stock indices: funds of hedge funds have an empirical downside risk with a 5% confidence interval of 3.69%, three times less than the S&P500’s downside risk of 10.73%. 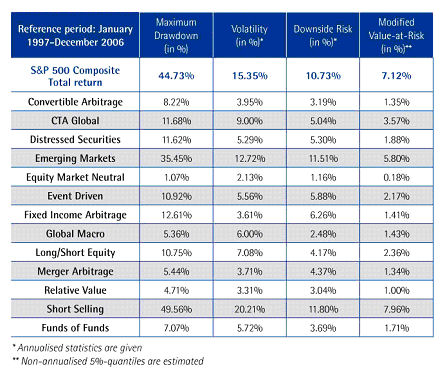 One can easily conclude from the large gap between CEIOPS’ perception of hedge fund risk and the “let the data talk” approach followed by EDHEC that fears rather than data have been the reason for this strong penalisation of hedge fund investments.

This is not necessarily all that surprising when one considers the poor reputation of hedge funds. Operational problems, political issues surrounding their interventions, failures and lack of transparency have been widely publicised, often at the expense of objective data.

Hedge funds are often accused of leading to systemic risk; of being a threat to the businesses they target; and of being extremely risky for private investors because of the risk of fraud and a “bet the house” attitude.

EDHEC’s research has proved that most of these preconceptions are statistically unfounded.

The natural conclusion is that the overall risk of investing in hedge funds must be considered to be much lower than that of investing in equities. EDHEC thus totally disagrees with the harsh penalisation of hedge funds as proposed by CEIOPS. We recommend correcting this by significantly lowering the stress scenario for hedge funds and at the same time significantly increasing the assumed diversification benefits from such investments. Due to the presence of default risk, EDHEC also recommends raising the penalty for concentration risk in hedge fund investments: an exposure to only one or two hedge funds makes it possible to lose the full amount invested, so companies that make large bets in single hedge funds should be penalised.

1 Note that we do not recall the calculations required to estimate the reduction for profit sharing, as this is neither specifically related to equity risk nor to the way hedge funds are treated.

2 LTCM had a leverage of 30 on Russian debt. According to the CISDM and TASS hedge fund databases, between January 2000 and March 2003, the average leverage was 3.17 for Convertible Arbitrage, 1.81 for Equity Hedge, 1.61 for Event Driven, 2.10 for Distressed Securities, 2 for Merger Arbitrage, and 1.94 for Equity Market Neutral. Other empirical estimates give the same order of magnitude.