April marked a positive start to the second quarter of 2008, as the Eurekahedge Hedge Fund Index rose 1.5%1 on the month. The month saw a marginal increase in the overall assets of the hedge fund industry, as performance-based flows surged up to US$4 billion, but were partly offset by investor redemptions of about US$1.7 billion during the month, owing to net increase in hedge fund assets as at end-April (as suggested by the funds that have reported to date), standing at US$1,650 billion.

The month’s performance-based flows, to some extent, reflect the sharp reversals seen across many asset classes during the month, some of which (such as the upturn in global equities) largely benefited managers across most regions. The table below illustrates the monthly asset flow data for the current year-to-date. 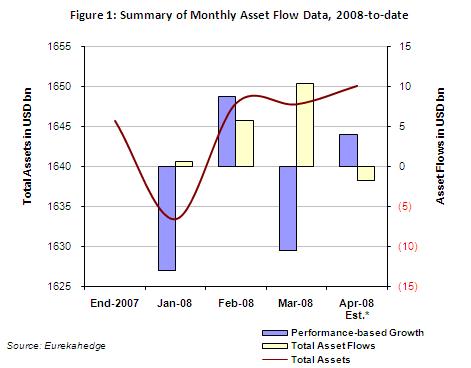 In terms of regional mandates, North America- and Asia ex-Japan-focused managers recorded the highest performance-based increases in assets, summing up to US$1.9 billion and US$1.2 billion respectively, as can be seen in Figure 2. Interestingly, the figure also shows that all regions recorded positive performance-based flows in April. These increases can largely be attributed to the run up in most equity markets across the board; the MSCI World Index returned a solid 5% in April.

The positive performance-based flows in April, owing to sharp rallies across equity markets, are also clearly outlined in Figure 3. The graph shows that the maximum performance-based increase in terms of strategic mandates has been in long/short equities and in long-only absolute returns strategies (US$3 billion and US$0.9 billion respectively). Strategies such as CTA/managed futures, fixed income and multi-strategy, however, saw negative performance-based flows during the month; CTAs were negatively impacted by, among other things, the sharp appreciation in the US dollar (1% and 4% against the euro and yen respectively), while a downturn in bond markets, owing to the return of risk appetite and persistent inflation-related concerns, impacted the performance of fixed income managers. 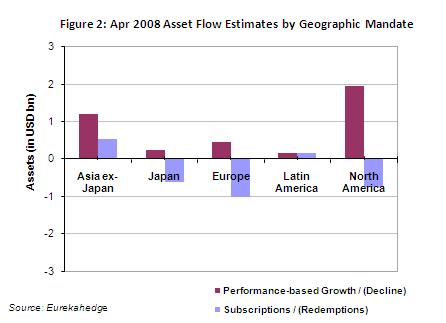 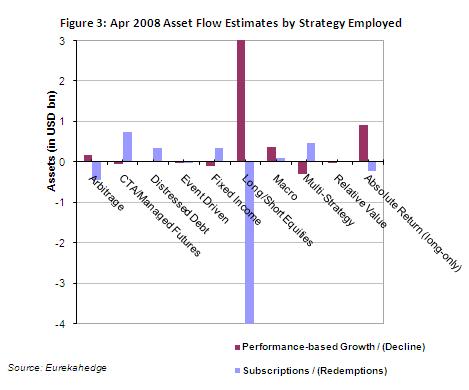 As far as investor inflows and redemptions go, Figure 2 shows that Asia ex-Japan and Latin America-focused managers saw some inflows in April, summing up to about US$540 million and US$150 million. Most of the inflows into Asia ex-Japan were in long/short equity managers, while subscriptions to Latin America were seen mainly across fixed income and multi-strategy funds. All other regional mandates during April, namely Japan, North America and Europe, saw redemptions of US$0.6 billion, US$0.7 billion and US$1 billion, most of which were out of long/short equity managers across their respective regions.

In terms of strategic mandates, Figure 3 shows that long/short managers saw the biggest redemptions (US$4 billion) in April. This can partly be attributed to poor performance of equities throughout most of 1Q2008. Likewise, CTAs who outperformed throughout most of 1Q2008 saw the biggest inflows (US$700 million) during the month. In addition, most of the inflows into CTAs were seen across North America, where managers made healthy gains from shorting the US dollar (particularly against the euro and yen) in 1Q2008.

In terms of our outlook, we continue to be positive in the hedge fund industry on several counts. Firstly, market participants currently have varied outlook on most asset classes, which could bring out some amount of pricing inefficiencies in the near term. These pricing inefficiencies, however, can often work to the advantage of managers employing short-term trading strategies, such as arbitrage and relative value. Secondly, the recent rally across most equity markets in April has largely resulted in improved investor sentiment, which could well work in favour of hedge fund managers. Against this backdrop, we expect the improved sentiment to translate into some amount of fresh inflows into hedge funds in the months to come.