Persisting turmoil in the global financial markets has led to several media reports in recent months painting hedge funds in a negative light, in terms of performance and/or redemptions. Such reports tend to ignore that there are two sides to the hedge fund performance coin – absolute return and conservation of capital. Some losses may be unavoidable in any period of turmoil, as managers close current positions (be they in response to margin calls or stop-loss triggers), and reallocate funds to safer asset classes. We believe that an objective look at hedge fund performance would have to include a comparison against more conventional asset managers. To that end, this article examines the performance of hedge funds in recent months against that of mutual funds1 and relatively new enhanced equity products (such as 130/30 funds). The rationale for the comparison was to uncover the effect of varying degrees of short exposure on fund performance. The following table shows the performance ranking of these fund types against the S&P 500.

Despite the series of tumultuous market events in recent months, it is evident from the above table that long/short equities managers showed resilience in recent months, outperforming the S&P 500 by over 2% in May and by over 4% for 2008 YTD. Hedge funds also made solid gains across the board over the past 1-, 3- and 5-year periods (up to and including May 2008). Besides, 130/30 funds which employ different proportion of exposures in investing their funds (130% longs and 30% shorts), were making modest gains over the same period of time, but reported negative figures in 2008 YTD (-3.3%) and for the 1-year (-2.3%) period. In 3-year, the funds performed less favourably (5.8%) compared to those investing in long/shorts and long-only investments. In contrast, mutual funds posted the lowest average returns among the three fund types, with relatively low returns throughout the time periods considered, except for a climb (12.9%) in the 3-year period.

The pattern of performance in mutual funds is broadly reflected in that of the benchmark index, as these funds clearly benefited from up-trending equity markets for the better part of 2006 and 2007. Hence the superior annualised returns among mutual funds for the 3-year and 5-year periods. In the more recent months, however, the S&P 500 was in negative territory with sharp drop of returns (-8.5% for the past 12 months, and -4.6% for 2008 YTD).

To put the figures from Table 1 above in a clearer context, let us begin with a round-up of market events that have had an effect on fund performance in the months leading up to May. After several years of steadily rising markets and low volatility across the board, the initial trigger was weakness in the US housing and sub-prime markets, which lowered risk appetites and led to sharp sell-offs in equities and high-yielding currencies early in 3Q2007. This gave way to concerns over liquidity, leverage and contagion, raising borrowing costs, widening credit spreads and heightening market volatility. The markets had a brief respite during September to October 2007, owing to pro-active measures against risk-aversion and dwindling liquidity from the Federal Reserve and other major central banks (chiefly through significant cuts in the short-term interest rates and discount rates). However, concerns over weakness in the credit markets re-emerged towards the year’s close, as it became apparent that the losses suffered by some of the large global financial firms were far greater than expected.

Year-to-date, global equities have seen mixed performance; January and March showed setbacks while February, April and May saw some rebounds from previous lows. The markets had an uncertain start to the year in 2008, owing to counteracting inflationary (emerging economies and emerging emerging economies, profitable corporations, cash-rich oil producers, anticipated rate-cutting from the Fed) and recessionary (fears of a slowing down US economy that may descend into recession, persisting tight credit environment) forces at play. Market volatility persisted during 2008 YTD, with aggressive Fed intervention (the latest Fed rate cut, on 30 April, brought the Fed Funds rate down to 2% – its lowest in over 3 years) and record-high crude oil and precious metal prices lending some support. However as energy and food prices continue to soar together with upward pressure on interest rates and a weakening US dollar (against most major currencies), inflationary concerns have once again heightened among market participants.

These market movements provide the basis for the comparative performance analysis that follows. For the purpose of this study, we have used data from the Wall Street Journal’s online Markets Data Center – for mutual funds (global stocks) and Eurekahedge index data for long/short equities and 130/30 funds. As mentioned earlier in the article, our aim is to contrast the performance of long-only investments against those with an element of short exposure, and to this end, we compare returns over the last five years across this spectrum of investment mandates (refer to figure 1, where the S&P 500 index is used as a proxy for mutual fund returns). Long/short equity managers combine long investments with short sales in order to reduce portfolio risk. A 130/30 fund also falls under the equity long/short strategy category as its structure is made up of 130% exposure to longs and 30% to shorts. Each investment style (mutual funds, long/shorts and 130/30s) carries a different degree of exposure to the changing markets. 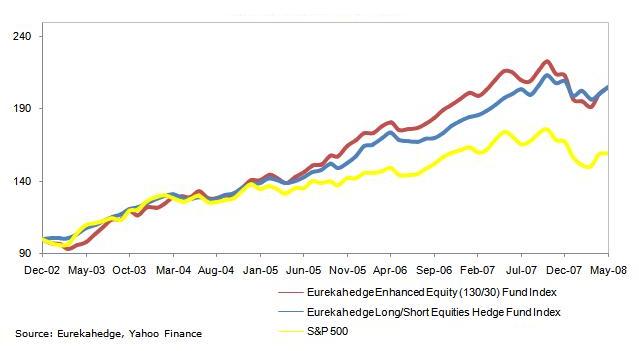 From October 2007 to March 2008, the S&P 500 fell 14.6% with significant divergence from hedge fund indices during the 2008 year-to-date. Returns from the market index have been choppy since the US housing crisis breakout last June, with subsequent dips in any period of turmoil. On the other hand, Eurekahedge Enhanced Equity (130/30) Hedge Fund Index has been in negative territory since November 2007, with a sharp fall in January 2008 (-7.7%) but there are some early signs of recovery in May 2008 (2.3%). The Index too outperformed the S&P 500 by 2% over the same period. Also in the same month, Eurekahedge Long/Short Equities Hedge Fund Index finished the month positively, outperforming the market index (2.1%) and 130/30 funds (0.1%). The Index has been moving in an upward direction especially during the market turmoil, ie October 2007 till 2008 YTD, while 130/30 funds and S&P 500 were dropping. It indicates that hedge funds are able to provide downside protection during negative periods.

To reiterate this point further, we re-examined the figures in Table 1, comparing average returns for each fund type over the periods of May 2008, 2008 YTD, and 1-year, 3-years and 5-years to May 2008. This is depicted in Figure 2 below. As can be seen, hedge funds perform better in conditions of rising volatility; long/short equities funds outperformed mutual funds by over 3% and 4% during the 3- and 5-year periods, and by over 0.3% in May alone, a month that saw rallying equities and marked reversals in the bond and currency markets. The funds were down 0.6% for 2008 YTD on average, but still staying strong, while 130/30 funds and mutual funds were severely impacted, each with losses of -3.3% and -3.5%. In this volatile market environment, it provides risk and opportunity for hedge funds, especially in long/short equities funds where managers are making superior returns. For example, major equity markets staged a strong rally in April and May 2008 as managers registered solid gains across the board; largely benefiting from long exposures to economically sensitive stocks, such as energy, materials and IT sectors. Also, taking short positions in consumer durables helped managers to offset some of their losses in the same period. Likewise, during the twelve months to May 2008, only long/short equities managers turned in gains to the tune of 5.6%, while 130/30 funds (-2.3%) and mutual funds (-3.1%) were in negative territories. Overall, the result is revealing, with long/short equities funds showing significant outperformance in the long run, and safeguarding capital in the more turbulent short run. This further supports a note made earlier about conservation of capital being the primary goal of hedge funds. 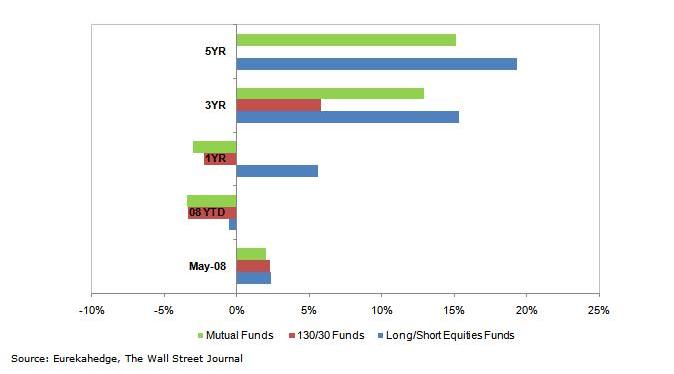 Market volatility remained at elevated levels, driven by continued economic headwinds and aftershocks of the sub-prime quake. Also, inflation fears are beginning to pick up, deepening anxieties that banks and securities firms will suffer even more hits from the credit crisis. The jump in the unemployment rate last month, coupled with accelerating oil prices have added upside risks to inflation. The Fed has taken aggressive steps to counter the existing market problems, initially in the form of rate cuts, then shifting focus to inflationary pressures. Such moves have been interpreted by some market participants to mean that the end of financial crisis is nigh, while many others insist that it is only the first phase of turbulence.

Insofar as hedge funds employ flexible investment strategies with an aim of consistent positive and risk-adjusted returns, our outlook for fund performance in the coming months remains positive. Despite the broad market movements, hedge fund managers could still make decent gains by flexibly adjusting their positions, diversifying in terms of investment strategies and regional mandates, de-correlating from the market, and thus profiting from a changing economy. More specifically, with crude oil and precious metals around their record highs, the dollar still weak against major currencies and equity valuations relatively low across the board, managers could profit from both the long- and short-side in the coming months. Furthermore, the persistent volatility could also translate into some gains for arbitrage and relative value plays. 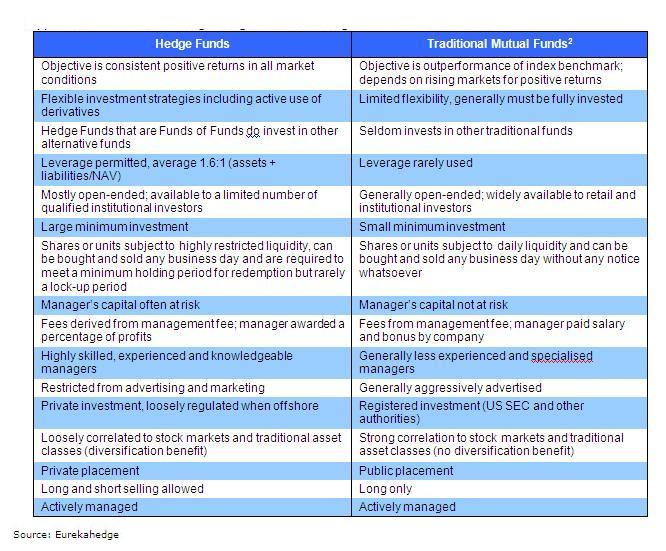 1 Please refer to Appendix I for an elaboration on key distinguishing features between hedge and mutual funds.