May marked another month of positive performance-based asset growth and minimal redemptions among hedge funds, as the composite Eurekahedge Hedge Fund Index rose 2%1 on the month. This brings the net increase in total hedge fund assets (estimated at US$1.66 trillion as at end May 2008) to US$4 billion for May and US$12.8 billion for 2008, year-to-date. The month’s performance was relatively optimistic in spite of persistent inflation concerns weighing on the markets and investor sentiment. 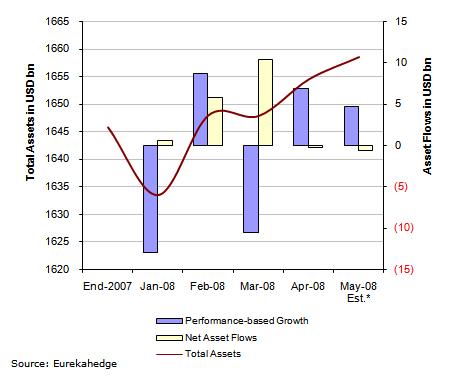 Gains during the month came mainly from equities, which recorded mixed returns across different regions (the MSCI World Index rose 1.1%), and from commodities (given strong rallies in energy prices; the Reuters-CRB Energy Index was up a whopping 18.5%). A marginally stronger US dollar (against some major currencies) also translated into some gains, over May. Consequently, equity-based strategies saw the biggest performance-based gains (US$2.4 billion), followed by other directional strategies such as global macro (US$0.6 billion each). On the other hand, persisting volatility in the equity markets meant that long/short managers also saw net outflows to the tune of US$3.2 billion, as investor assets were re-allocated to arbitrage, CTA and multi-strategy funds during the month. Strategy-wise performance growth and net asset flows during May are outlined in Figure 3.

In terms of regional mandates, North America- and Europe-focused managers recorded the highest performance-based increases in assets, summing up to US$3.7 billion and US$0.4 billion respectively, as shown in Figure 2. North American managers were up a solid 2.5% in May, despite notably slow growth in the US economy and a stream of rather discouraging economic news on inflation and consumer spending, among other things. Managers in the region profited from both long and short exposure to regional equities, and from currencies (shorting the yen and euro against the marginally stronger US dollar) and commodities. European managers too returned 2.7% on the month, benefiting chiefly from allocations to emerging Europe.

Allocations to emerging Asia, on the other hand, had a rough month as exposure to most of the region’s markets in China, India, Korea & Taiwan resulted in losses on average; the Eurekahedge Asia ex-Japan Hedge Fund Index finished the month flat to negative (-0.1%), while the region accounted for a mere 4% of the month’s performance-based growth in assets. On the other hand, the region has seen positive net flows in recent months (US$0.4 billion in May and US$0.5 billion in April), albeit into broader ‘emerging market’, ‘Asia ex-Japan’ and ‘multi-strategy’ mandates, as valuations have become more attractive. 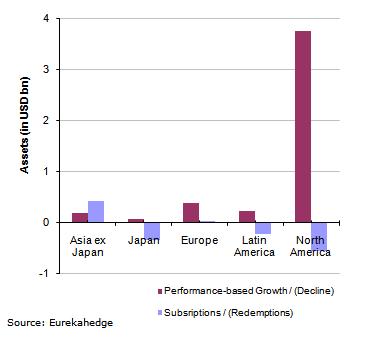 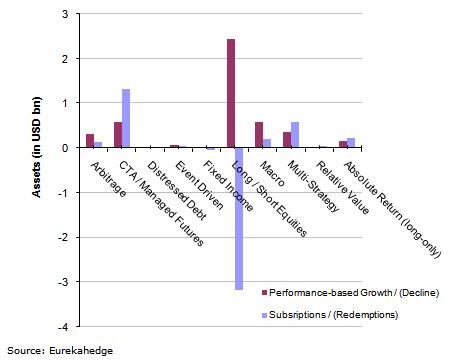 In closing, hedge funds had a strong run in May, despite some stress in the underlying markets – in terms of inflationary pressures, continued volatility in the markets and persisting uncertainties about economic growth. As we go into June, oil continues to trade at abnormally high levels, while equity markets appear to be oversold. As the markets await the response to rising inflationary pressures from the Fed and other key central banks, we see managers adopting a cautiously optimistic tone. This is also evident from asset flows during May, with allocations to arbitrage, multi-strategy and emerging market mandates seeing increased inflows.

We continue to be positive in our outlook for the hedge fund industry, largely for reasons elaborated on in earlier updates. Heightened volatility and oversold positions in global equities, coupled with varied outlooks from market participants, could translate into pricing inefficiencies in the near term. These pricing inefficiencies, however, can often work to the advantage of managers employing short-term trading strategies such as arbitrage and relative value. We have already seen some positive impact from this on asset flows in arbitrage funds in May. Furthermore, hedge fund performance in recent months has been strongly positive (1.3% in April and 2% in May), also bringing year-to-date returns back into black (0.7%). We expect the improved sentiment to translate into fresh inflows into hedge funds for the coming months.