Hedge funds saw net inflows of US$5.8 billion in July, which were more than offset by negative returns across the industry. The Eurekahedge Hedge Fund Index shed 2.2%1 on the month, against a backdrop of persistent volatility in the underlying markets. The month saw marked reversals across some key asset classes – commodity prices fell significantly (the Dow Jones-AIG Commodity Index lost 12%, on the month) primarily on concerns of falling demand, while equities rebounded from their intra-month lows (of -5.6% for the MSCI World Index) to close the month down 2.5%.

Although hedge fund losses for the month averaged 2.2%, their assets under management (AuM) shrunk by only 1.4% (US$28 billion), bringing the size of the hedge fund industry to US$1.93 trillion, as at the end of July. This suggests that larger funds, many of which tend to be managed by more experienced managers, considerably outperformed smaller funds within the industry. The chart below shows the monthly performance-based changes in AuM and net asset flows (inflow/redemptions) in 2008. 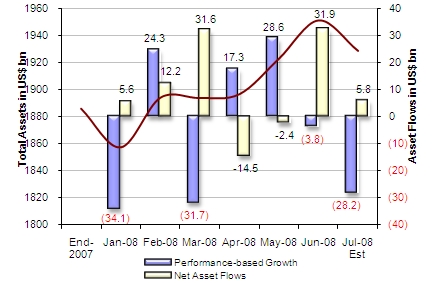 In terms of strategic mandates, long/short equities and CTAs saw the most performance-based declines in absolute terms, of US$11.9 and US$5.8 billion respectively. This was largely owing to the unanticipated movements across the commodity and equity markets during the month, which to a great extent affected the performance of managers who entered the month long on commodities and short on financials. However, despite losses, both these strategies were among the few to have witnessed flat to positive asset flows during the month (long/short equities US$2.5 billion; CTAs US$290 million).

While all other strategies saw performance-based declines (flat to negative), fixed income and multi-strategy managers were the only others to have witnessed positive asset flows during the month (of US$1.5 and US$7.6 billion respectively). Inflows into fixed income funds were partly a result of some improvements in the bond markets during the latter half of July, as the sharp fall in commodity prices reduced inflationary pressures towards the month-end. Strong inflows into multi-strategy funds suggested that investors were seeking diversification for their asset across different asset classes, owing to some amount of uncertainty (about the near- to medium-term) in the markets during the month. Figure 2 illustrates the performance-based changes and asset flows across the different strategic mandates.

In terms of regional mandates, Asia ex-Japan saw the largest inflows (US$7.8 billion), as some regional markets (such as India, China and Taiwan, among others) have started looking rather attractive owing to a sharp decline in their valuations. Latin American managers were the only others to have seen positive flows (US$1.3 billion) during the month, as the sharp fall in regional equity markets in July was seen by many as a good opportunity to park funds. All other regions saw outflows of between US$300 million to US$2 billion in July.

All regions remained negative in terms of performance-based changes in AuM in July, with the largest declines seen in Europe and North America (US$10.2 and US$11.1 billion respectively). In Europe, exposure to Eastern Europe and Russia contributed to the month’s losses; while in North America, the late unwinding of shorts in equities (namely in financial names) resulted in losses during the month. Figure 3 shows the performance-based changes and asset flows across regional mandates. 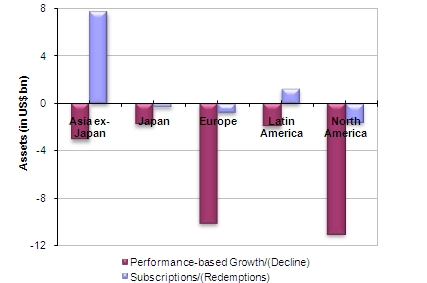 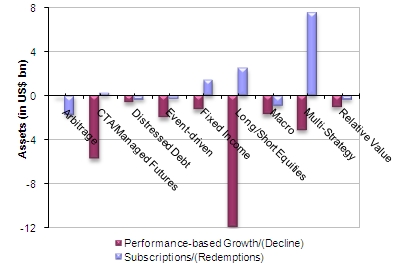 To conclude, after an eventful month in July, which saw trend reversals across some key asset classes, August has come across as a fairly positive month so far. Some major equity markets are faring pretty well (despite some volatility) month-to-date, with commodity prices continuing their downward slide and the US dollar gaining strength against some major currencies. Not only has this strengthened investor sentiment to some extent, but has also translated into a marginal increase in risk appetite. Furthermore, the notable correction in commodity prices has gone some way in reducing inflationary pressures, thereby changing the interest rate outlook of several market participants as well as central banks.

As far as troubles in the US are concerned, though they seem to be far from over, the macro-economic picture looks a lot better now. Recent reports state that the US trade deficit unexpectedly improved in June, falling by 10.3% to US$39.1 billion – the lowest level seen since December 2001. In July, data pointed towards an increase in the number of home sale agreements signed in the US, and August (to-date) has seen an improvement in US consumer confidence data, partly owing to falling gasoline prices. We anticipate such news to translate into a further increase in risk appetites over the near term and perhaps into fresh inflows into the hedge fund industry over months to come.

We also continue to remain fairly optimistic about hedge fund performance on several counts. For one, we expect the near- to medium-term volatility across asset classes to translate into decent opportunities for managers employing short-term trading. Secondly, the upward trend in equities could indicate healthy gains for value-investing equity managers on the long side, while a further correction in commodities can mean decent opportunities in commodity-related stocks on the short side. The decline in the prices of commodities, many of which are still considered to be relatively overvalued, also afford CTAs and directional macro strategies with lucrative opportunities on the short side.