As the financial markets continue to be roiled in a credit crisis that has sent volatility up across the board for nigh on one year, its impact is starting to show tellingly on the hedge fund industry – if not on the performance1 or asset flows2 front, then on the fund launch and liquidation front. The first half of 2008 has seen not only the lowest launch activity (272 funds), but also the highest number of liquidations (243 funds) during any comparable period over the past nine years.

The graph below draws a comparison of half–yearly start–up and closure activity over this 9–year period, together with total industry growth. 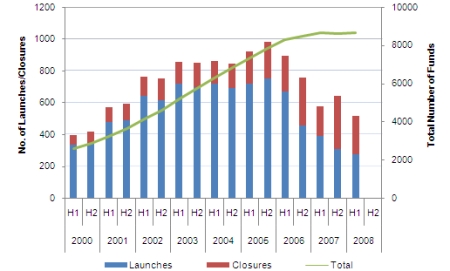 In fact, in the 12 months to June 2008, hedge funds have seen the biggest reduction in their numbers (578 funds drew their shutters down) since 2000, further contributing to the flattening of the industry growth curve that started in 2006.

While the current state of the financial markets (shrinking liquidity and trading volumes, and lowered risk appetites) is partly to blame, it cannot fully explain the higher rate of hedge fund turnover. For instance, over 40% of the funds reporting to the Eurekahedge databases are in the black for the year–to–Aug–2008. Furthermore, the higher risk–adjusted returns from hedge funds would imply an increase in investor allocations into hedge funds as risk premia rise – net asset flows into the industry continue to be positive, albeit lower (US$105 billion in 1H2007 vs US$65 billion in 1H2008).

Other structural reasons might help explain the rise in fund turnover better. Capital–raising has traditionally been one of the biggest barriers to entry into the industry. While this gap (between investors and funds seeking capital) is being bridged by the ‘institutionalisation’ of the industry and by the emergence of data vendors, fund incubators and third–party marketers, there is still a trickle–down aspect to institutional investors’ capital reaching hedge funds. This is evidenced by the fact that, over the past eight years, fund of hedge funds assets have grown at a compounded rate of 50% annually, a much faster pace than that of hedge fund assets (32%).

In other words, while a rise in risk levels may translate into a rise in investor allocations into hedge funds, assets tend to chase bigger funds with established track records, and weakness in the underlying markets adds to this by shrinking the total volume of assets available for allocation. This would lead to some consolidation within the industry, but our overall outlook for performance and asset growth remains positive.

2 The hedge fund industry drew net asset inflows to the tune of US$65 billion, for the first eight months of 2008.