Hedge fund performance in August was characterised by loss mitigation and short-term trading, as persisting concerns over a global economic slowdown produced yet another month of mixed returns across most asset classes. The composite Eurekahedge Hedge Fund Index shed 1.2%1 for the month, even as global commodities (CRB) and equities (MSCI World) dropped 6% and 1.6% in value, respectively. Returns from hedge fund regional and strategy mandates were negative across the board, and the biggest losses (on average) came from directional equity and emerging market allocations.

While equity markets remained extremely volatile through the month, a smattering of major equity indices finished in positive territory. Equity returns generally reflected those from regional hedge fund allocations, as the month窶冱 slide in commodity prices had a visibly heavier impact on emerging equities (China -13%, Korea -8%, Hong Kong -6%, Brazil -6%, India 1.5%, US 1.2%). Consequently, hedge fund allocations to Asia ex-Japan saw the largest erosion in value on average (-2.5%), while distress in the US financial sector was tempered by a more positive economic outlook and hedge fund allocations to North America managed to finish the month flat (0.02%).

The chart below illustrates the current-month, previous-month and year-to-date returns across the different regional mandates. 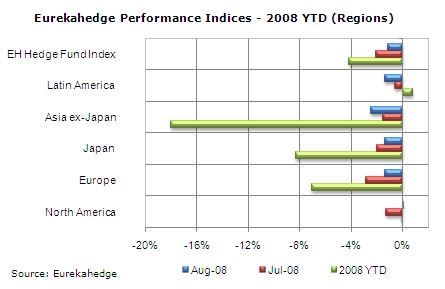 The MSCI World Index finished the month down 1.6% amid choppy trading, as global equities were buffeted by mixed signals in August. On one hand, dropping commodity prices took the edge off inflationary pressures and US economic indicators pointed to a stronger outlook; while on the other, continued losses at financial institutions and instability at the US mortgage lending houses Freddie Mac and Fannie Mae added to market volatility. Amid this environment, the S&P500 gained 1.2% on the month, while general risk aversion led to significant losses among emerging equities (the MSCI EM index was down 8.2%).

Bond prices, on the other hand, rose sharply as major central banks kept rates unchanged amid signs of receding inflationary pressures. Demand for government-backed debt was also fuelled by further write-downs and losses in the financial sector. Yields on the 10-year treasury note fell 17bps to 3.81%, while those on 30-year bonds fell to 4.41%.

Oil prices fell nearly US$32 to a barrel from their record high in July, closing the month at US$116. Forecasts signalling a deteriorating European economy and a sharp slowdown in Japan have put downward pressure on expectations for global energy demand. This, in addition to a strengthening US dollar and reduced threat from the month窶冱 tropical storms (hurricane Gustav) hampering offshore facilities in the Gulf of Mexico, led to the sharp decline in oil prices. Fears over dampening global demand have had an impact on metals prices as well (gold prices dropped 9% to US$831/ounce, for instance, while copper was down 7%). Natural gas prices also closed sharply lower (-13%) as US inventories rose.

The aforementioned downward forecasts for growth in Eurozone and Japan, together with positive US economic data and falling energy and commodity prices, have also helped strengthen the US dollar against most major currencies.

Amid this backdrop, arbitrageurs and value players fared well during the month producing near-flat returns, and to a lesser extent, directional macro (-0.9%) and multi-strategy (-1.3%) managers. The chart below shows the current-month, previous-month and year-to-date returns across strategies, while the following sections take a closer look at individual strategies. 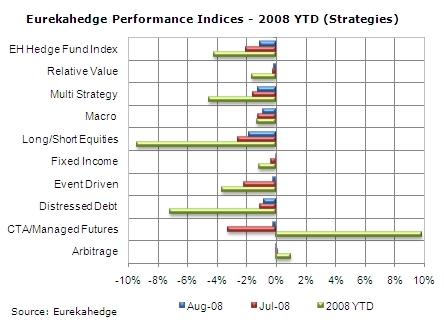 The Eurekahedge Arbitrage Hedge Fund Index had a flat month in August, with most of the gains coming from a few Europe-focused managers. European equities moved slightly higher in August (DJ Euro Stoxx is up 1.2%) with high volatility and little momentum, and arbitrageurs in the region benefited from mean-reversion trends in these markets.

Arbitrage allocations to other regions and globally, were characterised by the absence of significant outliers (positive as well as negative) at both the individual fund and strategy levels (majority of reported returns were in the +/-3% range), resulting in flat returns on the month. Equity and credit arbitrage plays were balanced off by sectoral shifts and high volatility, while widening credit spreads, liquidity constraints, subdued deal flow and financial sector instability, all proved to be difficult trading conditions for convertible arbitrageurs. 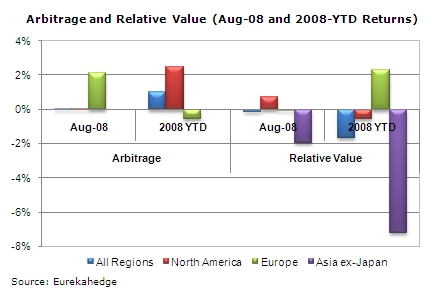 The Eurekahedge Relative Value Hedge Fund Index was similarly flat across regions (-0.2% for August), as profitable equity market neutral and short-term momentum plays in North America were neutralised by the sharper declines in Asia ex-Japan equities.

Directional equity strategies were uniformly negative across regions in August, contributing to an average loss of 1.8% for equity long/short managers. As is evident from the graph below, the losses were significantly higher for emerging market allocations. This was mainly owing to heightened volatility among global equities, especially emerging and frontier equities.

However, new fears of recession in Europe (brought on by data released on consumer and corporate sentiment) surfaced in the last week of August, leaving an adverse effect on long equity positions. Together with the downward pressure from losses in Russian allocations (owing to sell-off in commodities and escalating Russia-Georgia conflict), this resulted in a 1.6% loss for European long/short managers on the month.

Japanese equities in August were afflicted with low volumes, high volatility and drying up liquidity, which in turn was exacerbated by negative 2Q2008 GDP growth as well as corporate earnings growth data. As a result, the Nikkei 225 was down 2.3% while the broader TOPIX lost 3.8% on the month, and this is reflected in the returns posted by Japanese equity long/short managers for August (-1.4%).

Among Asia ex-Japan long/short managers, August proved to be a difficult month to navigate (-2.8%) amid mixed earnings results and downward pressure from oil price movements. For instance, the Shanghai Composite lost 13.6% as Chinese regulatory measures to tackle energy prices and inflation eroded corporate profits. That said, pairs-trading in equities worked well in the Korean, Taiwanese and Hong Kong markets, helping to cushion the month窶冱 losses.

Latin American equity market movements were similarly dominated by international news flow and macro data, with up- and down-swings exaggerated by the dearth of liquidity in the markets (Brazil窶冱 IBovespa was down 6%, while the MSCI Latin America index lost 8.5%). Latin America was the worst performing region among directional equity managers in August, losing 3% on average. 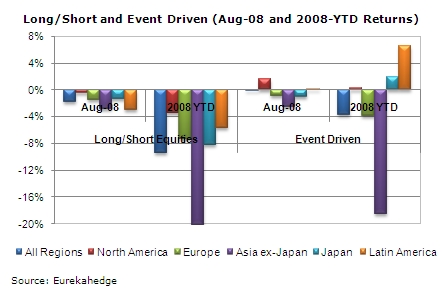 Event-driven managers too were affected by the downturn in global equities, as is evident from the graph above. However, gains from North American allocations could offset losses elsewhere, and the Eurekahedge Event Driven Hedge Fund Index ended the month largely flat (-0.2%). Event-driven plays in North America generally benefited from deal closures as well as spread tightening in a number of ongoing deals. On the other hand, the fundamental bases for opportunistic longs in emerging markets were frustrated by distressed selling and technical price-inconsistencies.

Fixed income was one of the few strategies that generated flat to positive returns across regional allocations in August; the Eurekahedge Fixed Income Hedge Fund Index rose 2bps on average.

Fixed income markets in North America witnessed a rise in spread volatility (both long- and short-term), as markets factored in the likelihood of a government bailout of the GSEs (Freddie Mac and Fannie Mae), and of the deposit insurer (FDIC) tapping treasury markets as more US banks fail. Fixed income arbitrage plays in these markets benefited from positions along the volatility curve, as well as from trades at the short end of the yield curve.

Distressed debt managers were down 0.9% on average for August, with minor gains coming from North American allocations (0.4%). The high-yield market was relatively quiet in August (0.3%), following active trading in the preceding two months, given shrinking volumes and risk appetites. Spreads widened by 27bps during the month, while deal flow remains miniscule (three deals priced at a total value under US$700 million), so performance during the month was mainly driven by short positions. 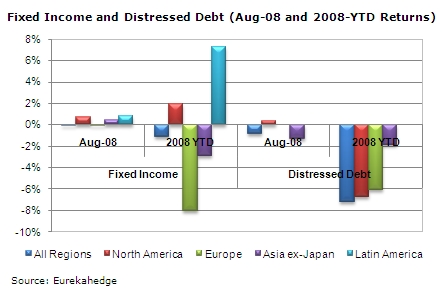 CTA/managed futures too ended the month largely flat (-0.2%), as region-specific allocations outperformed global ones, in a month where global market movements were largely driven by a stronger US dollar and falling energy/commodity prices, and managers were hurt by the sharp reversals in asset and currency prices. On the flip side, gains were largely made from short positions in oil and/or in some of the major currencies that weakened against the US dollar (Australian dollar, for instance, which lost nearly 9% against the US dollar). 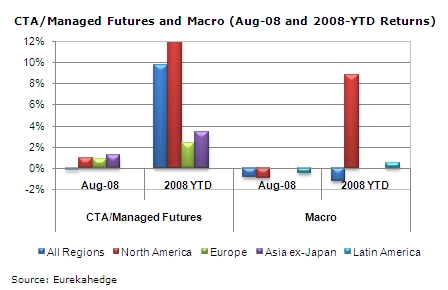 In the North American markets, as declining commodity prices eased inflation pressures, equity and bond prices improved and the dollar strengthened, regional multi-strategy managers were able to limit losses through re-adjusting their currency and interest rate exposures, and through short-term momentum trading in equities. 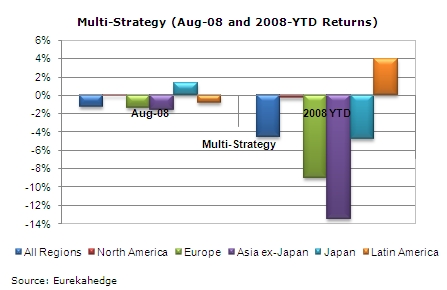 In Japan, as new data pointed to a sharper economic slowdown in the coming months, the TOPIX ended August down 3.8% while the yen lost 0.9% against the US dollar and yields on 10-year Japanese government bonds fell by 10.5bps to 1.41%. Corporate credit spreads widened as well, due to bankruptcies in the real estate sector. August also saw healthy merger activity in the markets, with 83 new deals announced. As a result, multi-strategy managers were able to profit from short credit, equity net long and arbitrage, and merger arbitrage components of their portfolios, and returned a healthy 1.4% for August.

Going into September, we see most major markets trending in a similar fashion to that seen in August, with equities across the board being volatile and negative. News of large institutions in the US filing for bankruptcy protection and others being bailed out or bought over, is among the factors responsible for the continued distress in the financial sector and the consequent volatility across equities.

However, we anticipate some of this weakness to translate into profitable opportunities for hedge fund strategies in the near-to-medium term. For instance, deals such as the US$50 billion acquisition of Merrill Lynch by the Bank of America, among others, afford event-driven managers with decent short-term opportunities. Also, the present volatility across the equity markets can work to the benefit of managers employing short-term strategies like arbitrage and relative value. Additionally, directional (namely downward) movement across equity markets, particularly within the financial sector, offers long/short managers with ample opportunities on the short side, while the strengthening trend of the US dollar (given the fact that it is stronger against many major currencies month-to-date) can work in favour of CTAs and macro managers. Based on these factors, among others, we continue to remain fairly optimistic about hedge fund performance for the months to come.