Emerging markets private equity fundraising is on track to significantly beat 2007 totals. Led by Emerging Asia, 104 funds dedicated to investments in emerging markets raised more than US$35 billion in capital in the first half of 2008, a 68% increase over the amount raised during the same period in 2007, according to the Emerging Markets Private Equity Association (EMPEA). The total value of private equity funds raised in the first two quarters of 2008 exceeds the US$33 billion raised during all of 2006.

EMPEA’s analysis of fundraising trends for the first six months of 2008 reveals that: 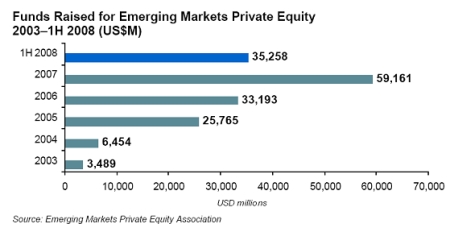 As in past years, Emerging Asia continues to lead in emerging markets fundraising. Funds focused on Emerging Asian private equity markets raised a total of US$26.3 billion, more than double the US$11.6 billion raised by Emerging Asian funds in the first half of 2007. Pan-Asian regional funds accounted for US$11 billion of the US$26.3 billion total raised for Emerging Asia, while fundraising among China-dedicated funds boomed, with a watershed US$11.2 billion raised through June 2008. Capital commitments for India-dedicated funds grew by 357% over the same period in 2007, raising a total of US$3 billion in the first half of 2008.

While capital raised by Emerging Asian funds has grown dramatically year-to-date in 2008, the pace of fundraising among funds focused on other emerging regions is roughly tracking with trends in 2007.

Funds focused on growth and expansion capital continue to dominate emerging markets private equity, accounting for nearly half of funds raised in 1H2008, up from 38% of the total raised in the first half of 2007. Venture capital funds represented 26% of capital, and buyout funds 13%.

“Fundraising results for the first half of 2008 bode well for the industry but don’t tell the whole story. Institutional investors weighing their future allocations will be looking closely to see how quickly and how well this growing pool of capital gets deployed. As the fund sizes continue to grow, investors need to see that these markets present sufficient opportunities to absorb this capital,” said Sarah Alexander.


The Emerging Markets Private Equity Association (EMPEA) is an independent, global industry association that promotes a greater understanding of and a more favourable climate for private equity investing in emerging markets. EMPEA’s more than 230 members collectively represent more than 40 countries and nearly US$500 billion in assets under management. For more information, visit http://www.empea.net.