September was a historic month that saw wide swings in the underlying markets (both the MSCI World Index and the Reuters CRB Index shed over 12% for the month) and several centuries-old financial institutions being bailed out, bought over or filed for bankruptcy. Against this backdrop, the Eurekahedge Hedge Fund Index recorded its worst monthly loss, shedding 4.6%1 on the month, while the industry also witnessed some redemption during the month. On the whole, hedge fund assets shrank US$88 billion, reducing the industry’s size to US$1.79 trillion.

The chart below shows the monthly performance-based changes in AuM and net asset flows (inflow/redemptions) year to date. 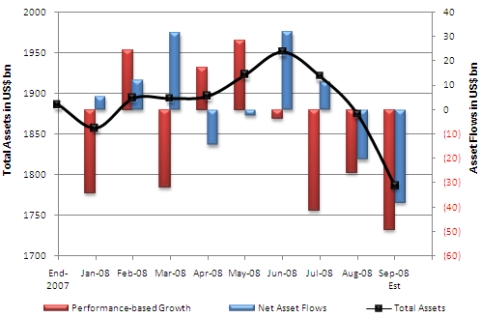 In terms of regional mandates, all regions saw flat to negative performance-based changes in assets as well as asset flows. North American managers lost nearly US$33 billion from losses, and another US$20 billion from redemptions. However, while North American managers posted the biggest decline in assets in absolute terms, Latin American and European managers lost the most assets in percentage terms, with their AuMs falling 7% and 5.4% respectively. In Latin America, redemptions and losses can be attributed to the sharp fall in commodity prices, in addition to discouraging forecasts of a further weakening over the coming months, which tend to affect the region’s economy. In Europe, heightened distress in the financial sector, coupled with the lack of liquidity and widespread expectations of a further slowdown in the region’s economy were among the factors responsible for redemptions.

All strategic mandates saw net redemptions in September, with all, except CTAs, also recording losses during the month. The positive performance-based gain in assets for CTAs can be explained by the decent returns realised by currency-investing managers positioned with bets in favour of the stronger US dollar, as, such gains more than offset losses suffered from exposure to commodities, among other things.

Not surprisingly, long/short equity managers saw the largest losses as well as redemptions, given the high volatility and sharp downturns across most major equity markets. Furthermore, widespread anticipation of a further global economic slowdown, which may well translate into larger drawdowns across equities, was among the factors responsible for net outflows across the strategy. 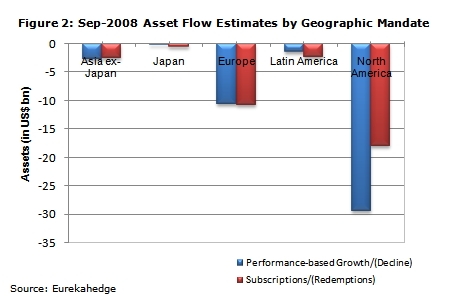 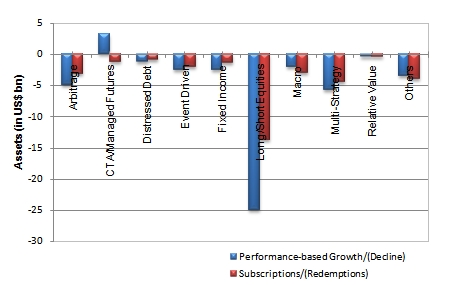 An interesting observation from this month’s asset flows report is that despite the continuous flow of discouraging news and economic data in September, losses in the industry exceeded actual outflows during the month. This, to some extent, leads us to believe that hedge funds continue to remain the investment vehicle of choice for many, given the industry’s relative outperformance to the underlying markets, and notable alpha in the case of several individual funds (nearly 40%1 of the hedge funds reporting to the Eurekahedge databases continue to remain in positive territory as at end of September).

On the other hand, Eurekahedge research shows that nearly 50% of the hedge funds have a redemption notification period of one month or more, implying that some of the redemption requests made in the course of September may well be reflected in the October data reported to the databases in November. In that context, it would be interesting to analyse asset flows for October, which has also been an eventful month so far in the underlying markets, with many major equity markets having seen moves of over 5% in single trading sessions, on several occasions.

Most major equity markets continue to remain negative for the month-to-date in October. In the currency markets, the US dollar has continued to strengthen against most major currencies, while the bond markets have seen treasury yields fall sharply so far into the month. While most classes continue to exhibit high volatility on a daily basis, we anticipate some of the movements to translate into profitable opportunities for hedge fund managers. For instance, directional movements in the currency markets afford CTAs with lucrative opportunities to profit from. Furthermore, initial phases of the implementation of the US’ bailout plan may provide some support to the distressed financial sector; we anticipate the resultant (presumably, short term) upsides in stocks to work in favour of hedge funds employing short-term trading strategies. However, such opportunities would largely depend on how effectively (and efficiently) the Fed utilises its funds, which would play a key role in shaping movements in the underlying markets in the near future.