The financial landscape has permanently changed after the historic events of September 2008, and markets are seized up by a crisis of investor confidence. Major central banks have been struggling to quell market fears, inject liquidity, cut rates and kick-start growth in the face of the steady stream of negative economic data and an increasingly recessionary outlook for the global economy (Germany, Europe’s largest economy, has officially fallen into recession after its GDP shrank for the second consecutive quarter in 3Q2008).

The market events triggered by the culmination of the US housing bubble has shaved off over 40% of the value of global equities (as measured by the MSCI World Index over the 12 months to October 2008). During the same period, hedge fund assets shrank by 12% (to US$1.67 trillion) while returning -18% on average (as measured by the Eurekahedge Hedge Fund Index).

In light of these market events, we carried out a comparative review of performance during recent crises (ie over the past 20 years) between the aforementioned two indices, taking the MSCI World Index as a proxy for underlying market returns. More specifically, we compared the rolling drawdown in index value at the end of each month (drawdown from previous peak to month-in-question), as depicted in Figure 1 below: 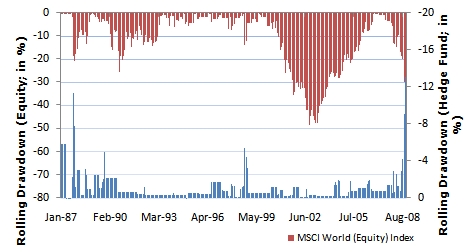 Back during the stock market crash of 1987, when a larger percentage of operating hedge funds employed equity-focused strategies, an 18.7% drop in equities corresponded with an 11.3% drop in hedge fund returns. This correlation has gradually changed over the years, partly owing to the significant rise in the number of hedge funds as well as in the variety of investment styles employed. In August 1998, when the spillover effects from the Asian financial crisis plunged global equities by over 13%, hedge funds lost about 4% on average. During the NASDAQ bear market of 2000-2002, hedge funds gained 42% while equities lost 47%.

Most of these crises did not affect markets on a global scale the way the events of September 2008 did. As of October 20081, hedge funds lost 13% off their previous peaks (the bulk of the decline occurred in September and October 2008) while equities were down 43%. Numerous factors, such as steady deleveraging, forced liquidations, redemption pressures and repricing of credit, over the past few months, diluted fund performance. Directional trading in equities were especially hurt by short-squeezes and unduly technically-driven markets.

To gauge the impact of this market downturn on fund performance in the near term, we then compared changes to the hedge fund index’s information ratio2 against equity index over different periods. It is interesting to note that, from a low of 0.2 in October 1987, the information ratio has only improved marginally over the years, recording 0.69 in August 1998, an average of 0.76 between 2000 and 2002, and 0.8 in October 2008. Also worth noting, during the up-trending markets from mid-2003 to mid-2007, the ratio stood at an average of 0.77. This supports the claim that hedge funds tend to diverge from, or be less correlated to the underlying markets, especially during periods of market instability.

This review informs and supports our overall outlook for the hedge fund industry, which remains positive. While the past two months have seen decade- and generation- wide lows in most asset classes that are still seeking a bottom, a case can be made for very attractive valuations in a medium- to long-term investment horizon. The hedge fund industry is witnessing some of the biggest asset outflows in over three years, but we also continue to see less risk-averse investors seeking entry into previously closed funds, or retaining their current allocations in view of substantial future gains.

1 Based on 60% of the funds reporting their October 2008 returns to the Eurekahedge databases.