December has traditionally been a positive month for hedge funds, and 2008 was no different; the Eurekahedge Hedge Fund Index returned a healthy 1%1, positive for the first time since May 2008. The month’s gains came despite a continued decline in the global economic outlook in December and negative repercussions from the Madoff scandal. The latter meant that redemption pressures continued to be an issue despite improved performance and the fact that more funds locked-in their investors during the month.

In terms of strategy allocations, directional macro (1.7%) and CTA/managed futures (1.4%), and to a lesser extent, equity long/short and multi-strategy (up 1% each) funds  finished the month strongly higher, with trend-following proving to be the main driver of the month’s gains. Returns from directional equity plays (1.1%) were reflective of underlying equity prices, which remained volatile but ended the month in positive territory.

2008 was a particularly rough year for most hedge funds, and stands out as the only negative year in the last nine (as measured by the Eurekahedge Hedge Fund Index). In many respects, the historic and unprecedented market events that transpired between the months of September and November 2008 were quite beyond the control of most fund managers. It is telling that the bulk of the year’s hedge fund losses (-12.3%) came about in those three crucial months (-10.7%).

In terms of strategies, the star performers were CTA/managed futures and, to a lesser extent, directional macro. This is evident from the comparison of absolute and risk-adjusted returns across strategies in the chart below. 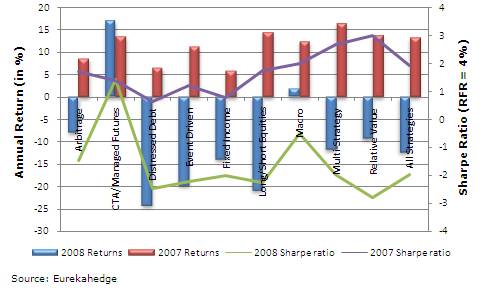 In fact, CTA was the only strategy that saw an improvement in the quality of returns over the previous year in 2008. Funds returned upwards of 17% for 2008, with returns not deviating much from their 2007 levels on a monthly basis. Year-on-year, the Sharpe ratio for CTA funds went up from 1.38 to 1.45. Directional plays were largely profitable on the year, with clear trends in commodity (rising till mid-July, falling since) and currency prices (strengthening US dollar and yen; weakening euro), while heightened market volatility supported the long volatility bias in funds’ options portfolios. Macro strategies were less successful, but still positive on the year (1.8%), and were also the least negative on a risk-adjusted basis (Sharpe ratio of -0.47 for 2008).

Returns across the remaining strategies were more or less uniformly negative with similar risk profiles, as most asset classes could not escape the downturn in the global economy. This was especially true of distressed debt, event-driven and equity long/short funds, as volumes and liquidity dried up in the equity, credit and high-yield markets.

Our outlook for hedge fund performance in 2009 remains cautiously optimistic, as attractive valuations in the equity and credit markets are countered by negative economic data all round and an uncertain investment climate. On the upside, most managers are positioned for an environment of heightened risk aversion and volatility; leverage levels are down and cash levels are up across the board, while an increasing number of funds have restricted or locked down on redemptions, created sidepockets etc in an effort to avoid liquidity constraints and closing positions at a loss.

With fund closures on the rise, new launches on the decline, industry size back at end-2006 levels, and due diligence more important than ever, consolidation is certainly under way within the industry. But we believe the worst is over in terms of investor redemptions and fund liquidations.