After notable outperformance to most asset classes in recent months, the Eurekahedge Hedge Fund Index rose a healthy 1.5%1 in March. The month’s return was generated on the back of sharp reversals in the underlying market, triggered by renewed risk appetites; equities and commodities rose 7.2% and 4.4% during the month.

In terms of assets, however, the industry saw a flat performance-based change in assets (down US$230 million), as larger2 funds underperformed their relatively smaller counterparts. This, coupled with net redemptions of US$15.7 billion, which were a mere 20% of the monthly average for 4Q2008, brought the industry’s assets to US$1.34 trillion as at the end of 1Q2009. 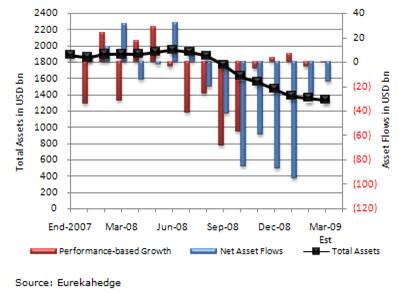 Below are the highlights on asset flows for the month of March:

We believe that a significant portion of the redemptions seen in March were from either funds that lifted their redemption gates or those having notification periods of over a month (meaning that redemption requests were filed by investors before February). Having said that, and otherwise too, withdrawals in March point towards a notable decline in redemption pressures, marking a sharp 75% fall from the monthly average net redemption (US$ 66 billion) seen over the preceding 6 months.

Going forward, we expect redemptions to ...