Hedge funds continued their healthy run in July with the composite Eurekahedge Hedge Fund Index up 2.2%1 during the month. This was partly attributable to the strong rally across underlying equity markets during the second half of the month; the MSCI World Index rose a healthy 8.7% through July on the back of better than expected Q2 earnings results and macroeconomic data. The hedge fund space also witnessed its third consecutive month of a net increase in assets, which rose nearly US$11 billion in July and currently standing at US$1.35 trillion.

Most of the month’s increase in assets was due to positive performance in July as net capital gains for the month stood at US$8.5 billion (0.6%). Net inflows, however, remained modest at US$2.1 billion, as US$15 billion of fresh subscriptions were partly negated by US$12.9 billion of redemptions. Figure 1 shows the monthly asset flows across the hedge fund industry since the start of 2008. 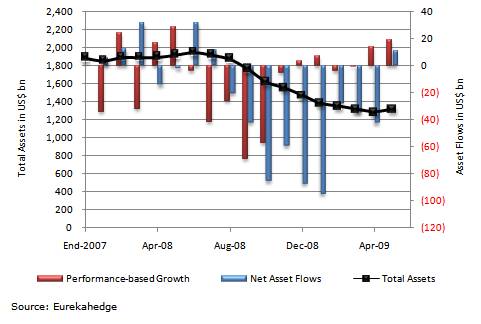 Going into 3Q2009, we see the gap between fund closures and new launches narrowing. The number of closures have declined quarter-on-quarter since 4Q2008 (as an increasing number of funds that have been crossing their high water marks are able to earn performance fees again, thereby reducing their pressure to meet operational expenses), while there has been an increasing number of new launches as managers attempted to make the most of the attractive valuations across the equity, high-yield and convertible markets over the past few months. We expect to see more launches than closures through the rest of 2009, and beyond. However, given that capital-raising has been among the biggest obstacles that managers face when launching new funds, we feel that the increased fund population will not be accurately reflected in the industry’s assets until mid-2010.

Having said that, we have been witnessing...

The full article is available in the EH Report accessible by paying subscribers only. However, for this month only, we are opening up the August 2009 EH Report for free to all readers.

Subscribers may continue to login as usual to download the full report and non-subscribers may email database@eurekahedge.com to request for a free softcopy.