Continuing with robust performance for August that began when markets picked up in March, hedge funds recorded their sixth consecutive month of positive returns. The Eurekahedge Hedge Funds Index gained 1.3% in August (13.3% YTD) amid mixed movement across asset classes – the S&P 500 was up by 3.3%, as markets continued with the rally which started in March, while the Dow Jones-UBS Commodity Index was down 0.6%.

Geographically, most regions, with the exception of Asia ex-Japan (which was down 0.6% in August), performed well. The month was relatively subdued for Asian markets, with most regional indices moving in a tight range. The Shanghai “A” shares suffered in particular, declining by 20% and dragging other closely related Greater China markets down with it.

In contrast, developed markets in the US and Europe outperformed amid strong economic data. The FTSE 100 gained over 6% on the back of rallying financial stocks. Europe’s largest economy, Germany, returned to positive growth and saw its consumer confidence jump to its highest levels since 2006. Against this backdrop, the Eurekahedge European Hedge Fund Index returned 2.5%. North America-focused managers returned 2% for the month.

The chart below shows the hedge fund returns for August 2009, July 2009 and 2009 YTD across the different geographical mandates: 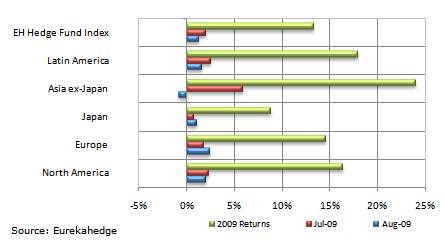