The global hedge fund sector remained healthy through August amid an increasing negative sentiment globally and mixed movements across the markets. The Eurekahedge Hedge Fund Index was up 0.46%1 during the month, bringing the August year-to-date figure to 1.71%; comparatively, the MSCI World Index lost 3.92% with its year-to-date returns at -7.51%.

Total assets under management grew by US$13.4 billion in August, bringing the size of the global hedge fund industry to US$1.54 trillion which represents a gradual but determined upward trend in assets. Performance-based gains for the month stand at US$6.3 billion as managers across most regions and trading styles were able to net in the various opportunities on offer. Net positive asset flows exceeded performance-based gains for only the second time in the last 10 months, accounting for US$7.1 billion of the total growth. 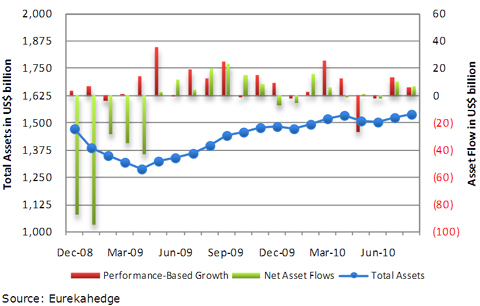 Below are the highlights for the month of August:

In terms of regional mandates, North American hedge funds continued to attract the most capital, gaining US$7.4 billion in August, making it the…