Hedge fund assets under management grew by US$4.5 billion in December, bringing the 2009 hedge fund industry total assets to $1.48 trillion. The Eurekahedge Hedge Fund Index gained a healthy 1.06% in the month to end 2009 on a positive note, bringing the yearly returns to 19.38% – the best annual gains since 2003. The positive performance during the month was delivered amid increased risk appetite, which pushed global equity markets higher – the MSCI World Index gained 1.69% while the S&P 500 was up by 1.93%.

Performance-based gains accounted for most of the growth in December as managers delivered US$4 billion through positive results. Although December was a relatively slow month for inflows, gaining US$0.59 billion through subscriptions, it was the eighth consecutive month of positive net asset flows. Given a negative performance and a couple of high-profile hedge fund fraud cases in October 2009, a slow pace of inflows was expected. Furthermore, investors tend to slow down their allocations at the year-end, preferring instead to invest in the first quarter. Indeed, January 2010 is already proving to be very active.

Figure 1 shows the monthly asset flows across the hedge fund industry since the end of 2007. 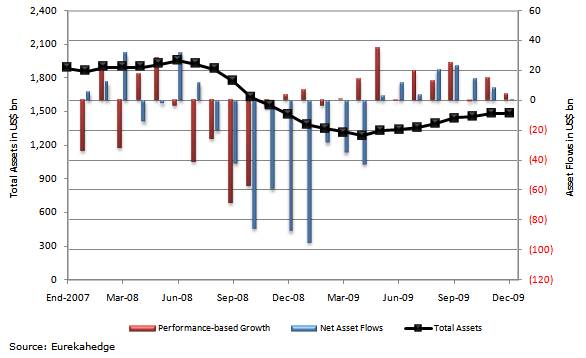 Below are the highlights for the month of December: