Hedge funds were up 2.27%1 in October as better-than-expected corporate earnings and anticipation of further quantitative easing resulted in sustained rallies in global equity markets. After witnessing the fourth consecutive month of positive returns, the Eurekahedge Hedge Fund Index now stands at a healthy 7.33% year-to-date October, with the sector poised to finish the year on a high note, as fears of a double-dip recession subside.

Total assets under management grew by US$28.2 billion in October, bringing the size of the industry to US$1.63 trillion, just above October 2008 level. Most of the gains were delivered by performance-based growth, with managers making the most of the upside in underlying markets and notching up hefty profits to the tune of US$18 billion. The sector also attracted capital for the fourth month running with healthy net positive asset flows of US$10.2 billion. 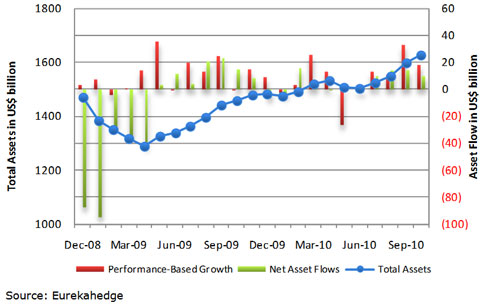 Below are the highlights for the month of October: