In relation to asset growth, performance, development of the service provider space and availability of new products and strategies, the Asian hedge fund industry has witnessed some remarkable trends over the last 11 years. At the start of 2000, there were less than 150 hedge fund managers that were investing in the region, including those based outside Asia, with a total AuM of less than US$20 billion. Since 2000, the sector started attracting greater attention from investors and managers alike and in the five years between 2002 and 2007, Asian hedge funds witnessed explosive growth, with the number of funds increasing from 377 at end-2002 to 1,235 by end-2007 and the assets under management increasing by more than 600% to hit US$176 billion. After peaking in December 2007, the size of the region’s hedge fund industry was hit by the combined effect of withdrawals and performance-based losses due to the credit crunch and global financial crisis. Assets under management fell to US$105 billion in April 2009. Since then, however, the sector has undergone a remarkable turnaround and managers have attracted significant amounts of capital as well as posting record performances.

Figure 1a: Growth of the Asian hedge fund industry 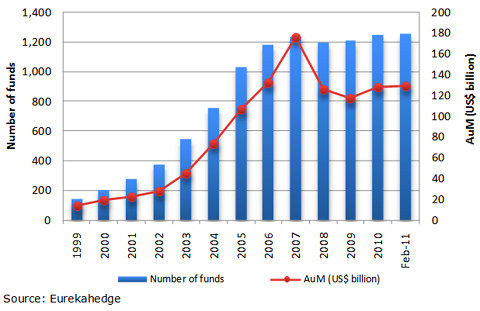 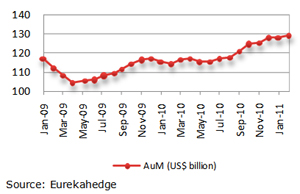 After enjoying a strong recovery in 2009, Asian hedge funds witnessed a few rough months in early 2010 as markets were unpredictable and investors remained on edge due to fears of the European debt contagion spreading to Asia. However, as managers continued to deliver healthy returns and market sentiment improved, investors resumed healthy allocation activity. Over the last 10 months, Asian hedge funds have gained US$7.3 billion through positive net flows while the Eurekahedge Asian Hedge Fund Index delivered a 8.66% return in 2010 – the total assets under management…