Hedge funds ended August in positive territory with the Eurekahedge Hedge Fund Index up 1.30%1 trailing the MSCI2 World Index which gained 2.48%, with market volatility falling across the different asset classes. In the US, the economy continues to show modest growth, prompting more speculation regarding possible revisions to the schedule for the Fed’s eventual raising of interest rates. Over in the Eurozone, inflation and growth remains weak, spurring Draghi into action to fulfil his commitment towards fighting deflation. European equities rallied in anticipation of a fresh round of quantitative easing, with regional markets ending the month largely in positive territory.

Final asset flow figures for July revealed that managers reported performance-based losses of US$5.0 billion while recording net asset outflows of US$4.8 billion as hedge funds saw their largest monthly decline in assets under management (AUM) as at 2014 year-to-date. Preliminary data for August shows that managers have posted performance-based gains of US$12.9 billion while recording net outflows of US$0.2 billion, bringing the current AUM of the global hedge fund industry to a total of US$2.14 trillion -  the highest level on record. 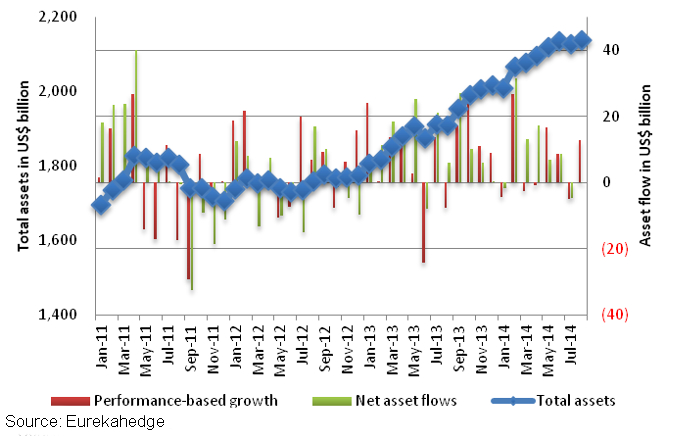