Eurekahedge was commissioned by AIMA (Japan) to conduct a survey of Japanese investors. The survey itself was conducted from end of March to April 2014 to gauge important insights into market sentiment, investment trends and key regulatory challenges facing the Asian asset management industry, with a particular emphasis on the outlook for Japan. The key findings from this survey are presented in this paper based on responses submitted by a total of 131 survey participants. As for the investment advisors who participated in the Survey, they are collectively advising and/or managing assets in excess of US$3.8 trillion.

The major findings of the Survey can be summarised as follows:

1. Where are you currently residing?
2. Where are your headquarters located?
3. What sector are you in?
4. What is the size of your investment advice?

As illustrated in Figure 1, the vast majority of the survey respondents (82%) were based in Japan. Figure 2 states that 72% were headquartered in Tokyo and 7% in Japanese cities other than the capital. 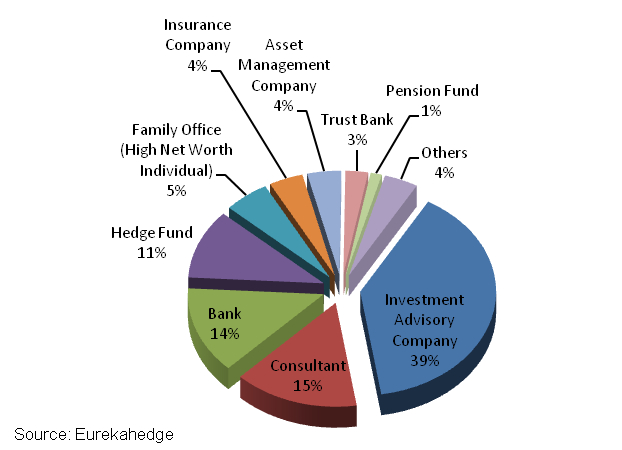 Collectively, those which refer to themselves as investment advisors either manage or advise assets in excess of approximately US$3.8 trillion. 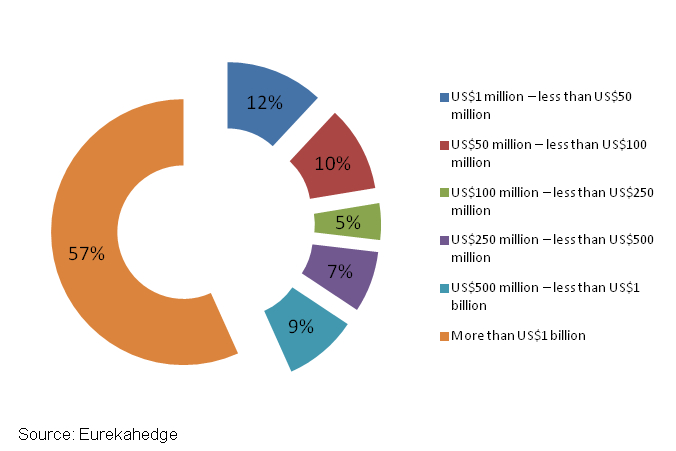 1. Do you think Abenomics has had a positive effect on the Japanese economy?

The second section of the survey explored key expectations regarding important macroeconomic themes pertaining to Japan.

Our respondents were asked to gauge the success of Abenomics on the Japanese economy in 2013. As is elaborated in Figure 5, a clear majority (88%) indicating that the policy had been largely a success. Of those who believed that Abenomics had a positive impact on the Japanese economy last year, 72% indicated that they were optimistic on the policy delivering beneficial results in 2014 as well while 28% believed the Abenomics had stalled.

Figure 6 shows that of the majority of the respondents, 85% believed that monetary easing was the most important component of Abenomics with regards to vitalising the Japanese economy. This should come as no surprise given the gain in the domestic stock indices on the back of a depreciating yen in 2013. Of the remaining respondents, 9% believed that de-regulation was the most important factor in terms of its impact on the Japanese economy while 6% pinned the success of Abenomics on the fiscal stimulus.

Figure 6: Which of Prime Minister Abe’s ‘Three Arrows’ has had the largest impact on the economy so far? 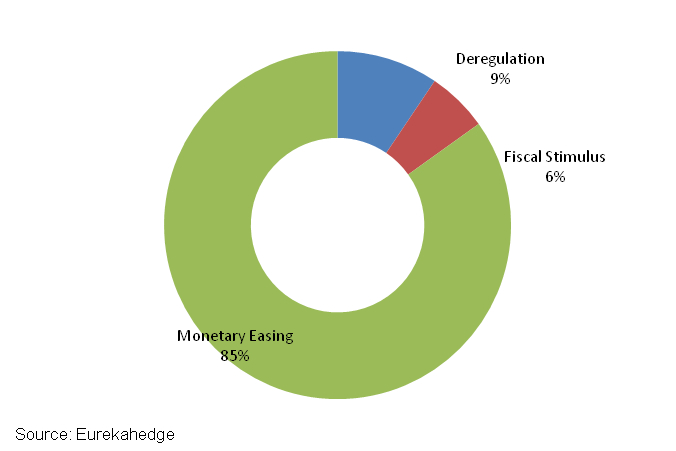 The next four questions asked about their expectations of the outlook in the Japanese stock markets, with the Nikkei 225 Index serving as our proxy for market sentiment. Figure 7 shows that a majority of the respondents, 72%, indicated that they expected the Nikkei 225 Index to end 2014 in upwards of 15,000 while 28% appeared less optimistic and believed the index would remain below this mark. A closer look at the results revealed that of those who remained more upbeat about the prospects of the Nikkei 225 Index, 51% (out of the 72%) believed the index would breach past the 20,000 mark by the end of 2014. 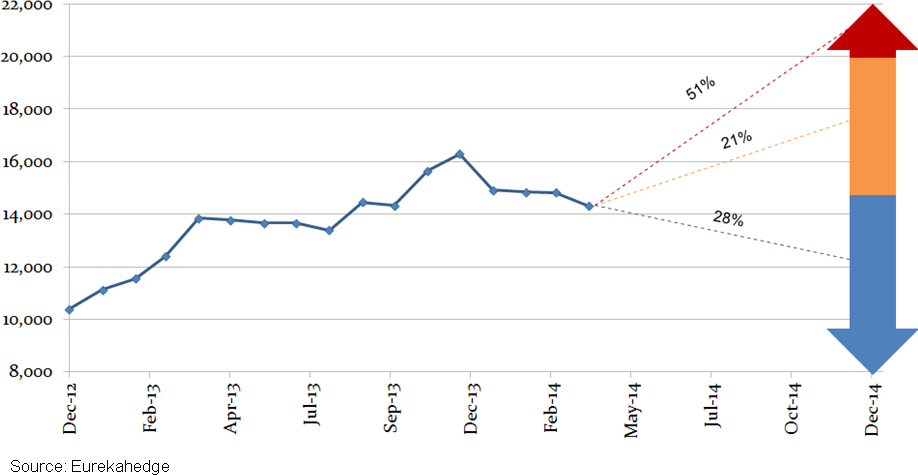 Respondent expectations about the level of the Japanese yen versus the greenback showed a much larger spread as illustrated in Figure 8 below. Of our respondents, 8% believed the yen would appreciate relative to the US dollar in 2014 and end below the 100 mark. 44% anticipate the US$/JPY trade to remain in the 100-105 range while 48% of the respondents indicated the yen would depreciate significantly with the US$/JPY trade surpassing the 105 mark. Of this last category, 41% (out of the 48% of respondents) believed the yen would remain in the 106-110 yen/dollar range, 1.6% expected the 111-115 range while 4.9% anticipate the yen to depreciate further - beyond the 115 yen/dollar mark. 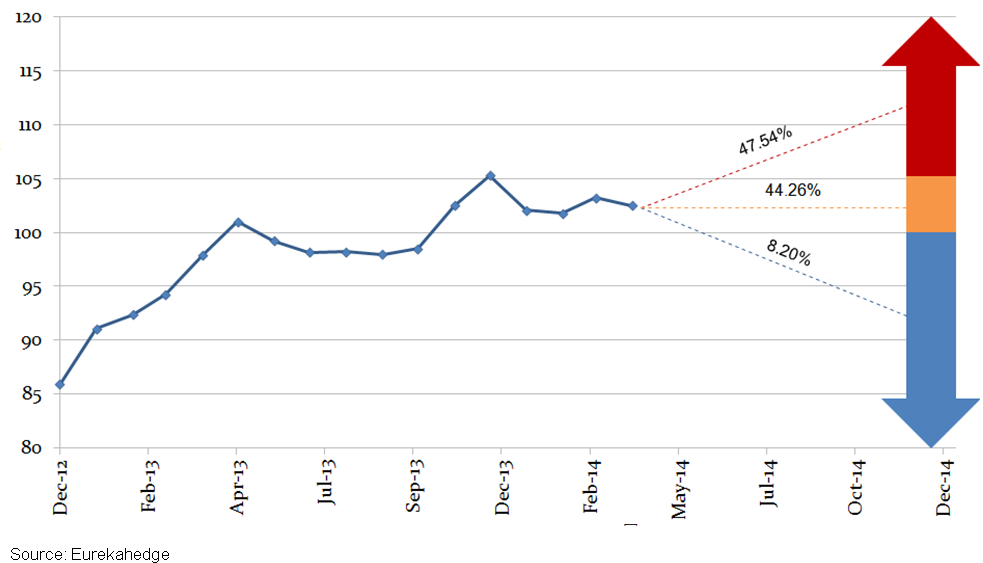 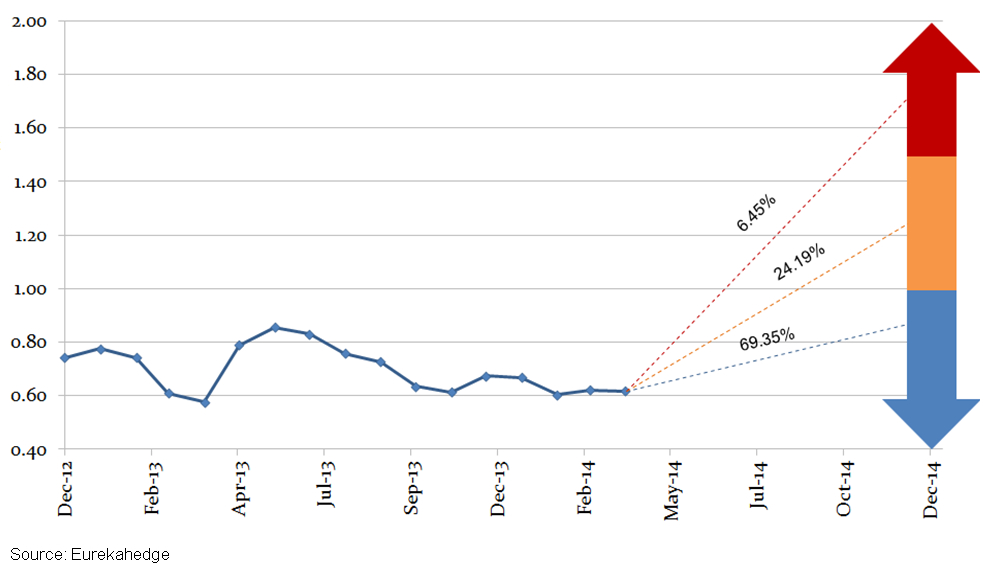 Figure 10 shows the expectations of survey respondents with regards to the Bank of Japan’s (BoJ) bond buying program. The majority of our respondents, 68%, maintain that the BoJ will not alter its bond purchases, 22% anticipate an increase, while 10% expect a decrease in the BoJ’s monthly bond purchases. These results come across as surprising given the heightened expectation in the markets of an increase in the BoJ’s bond purchases, especially given the recent slack in Japanese economic activity following the newly imposed sales tax hike. Furthermore, given the recent pressure on GPIF (Government Pension Investment Fund) – the world’s largest pension fund, to reduce its exposure to Japanese government bonds, there is an increased expectation in the market that the BoJ will need to make up for GPIF’s reduced demand for government bonds in case of change in the formers portfolio. 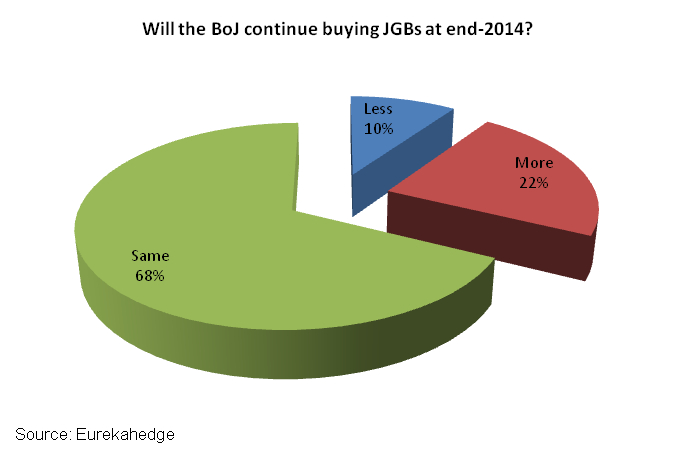 1. What % of your portfolio is bonds, equities, alternative funds (HFs, FoFs, PE), traditional funds, and cash?

2. Do you have a preference for investing via managed accounts?

4. What % of asset (within alternative assets) do you hold?

5. Which strategies are you interested in allocating to in 2014?

6. Which regions are you interested in allocating to in 2014? 7. In what order of importance do these factors affect your decision upon an investment (e.g. ODD clearance, liquidity)?

The third section of the survey asked respondents about their investment preferences and how they expect to change it going into 2014.

Looking at the broader picture, respondents indicated increasing their exposure towards alternative funds, infrastructure and commodities albeit the increase is marginal. It is interesting to note that the largest planned increase is in the respondent’s portfolio of cash/currencies. Given that the survey was conducted in the early part of 2014, the recent downturn in the Japanese markets might explain this increase in the holdings of cash/currency reserves as investors look towards the BoJ for further support. Meanwhile, the results indicate a reduction in exposure towards bonds, equities, real estate and traditional funds although once again the change is nominal. 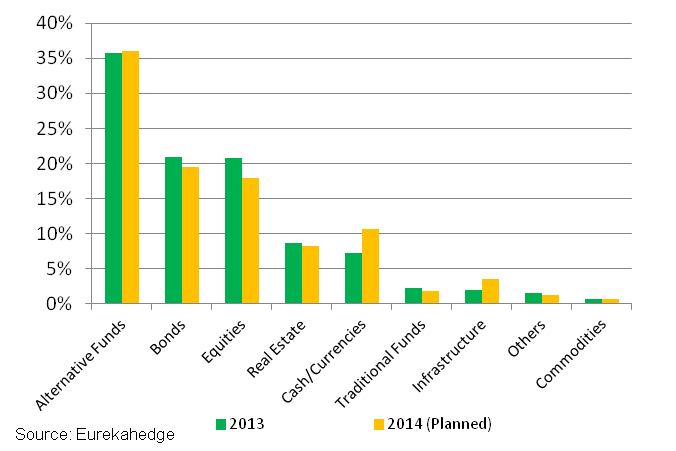 The second question in this section asked respondents asked about their inclination for investing via managed accounts, with less than 20% indicating a preference for it. 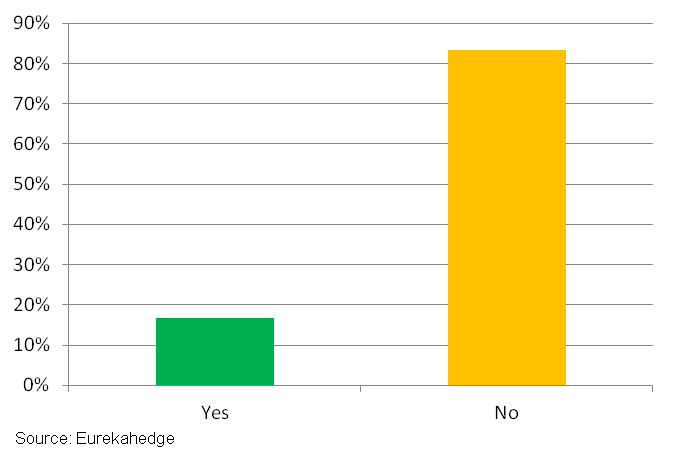 The third question asked about the current and 2014 planned holdings for JPY-denominated and foreign currency denominated assets (including Euro JPY assets). In 2013, 69% of all holdings were JPY denominated, with respondents indicating a small planned decrease in their holdings to 57% of the portfolio for 2014 and beyond. 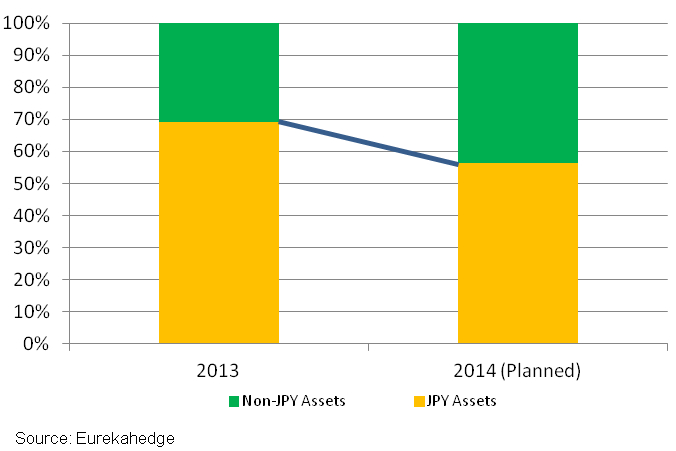 Figure 14 shows the breakdown of assets within the alternative investment sphere for our respondents, along with the planned changes they envision going into 2014, which was in response to the further questions asked in this section.

The bulk of the assets are locked into hedge funds – 73% with respondents holding their allocations roughly steady for 2014 and beyond. This should come as little surprise given the performance of Japan investing hedge funds, which were up 27.90%1 in 2013, their best annual performance on record.

The next big constituent is funds of hedge funds, which account for roughly 17% of portfolio allocations to alternative investments in 2013. Our respondents indicted increasing their exposure to multi-managers by roughly 1.5% for 2014 and beyond. The Eurekahedge Japan Fund of Funds Index was up 27.85% in 2013, matching the performance of single managers with a lower risk factor as multi-managers can diversify across range of hedge funds managers and investment strategies.2

Private equity and venture capital funds were the next main constituents, although our respondents indicated decreasing their exposure to these asset classes. 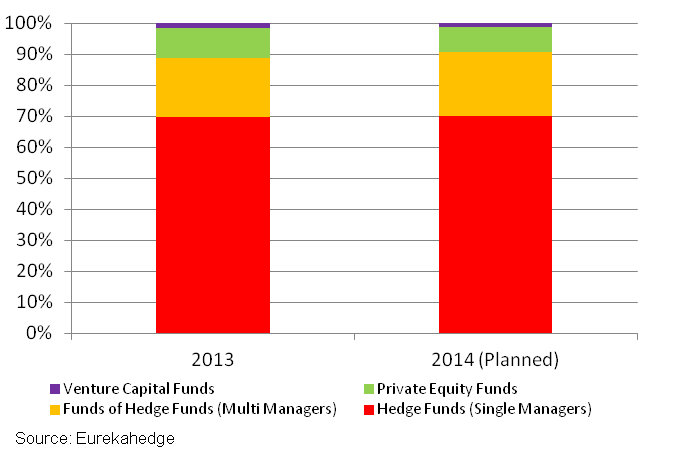 The fifth question in this section asked about the asset allocations across hedge fund strategies. In another words, it asked what kind of strategies our respondents planned to have exposure to for 2014 and beyond.

Looking at the broader picture, our respondents intend to increase their exposure to long/short equities and event driven strategies by the largest amount – a 46% and 34% increase respectively. This should come as little surprise given that these two strategies, especially deployed with a Japan mandate delivered exceptional returns (above 25%) in 2013.

On the contrary, investors intend to decrease their allocations to CTA/managed futures, macro and fixed income strategies by 23%, 18% and 13% respectively. For the remaining investment strategies, future allocations remain largely unchanged as depicted in the figure below. 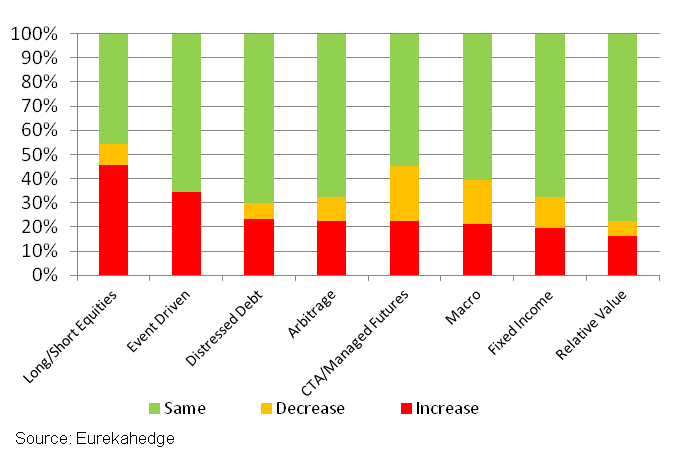 Respondents were further asked about their asset allocations across regional mandates with the results as depicted below in Figure 16. The majority of the respondents indicated little or no change in their exposure to Japan and North America, while indicating that they planned to reduce their asset allocation to Europe and Latin America. 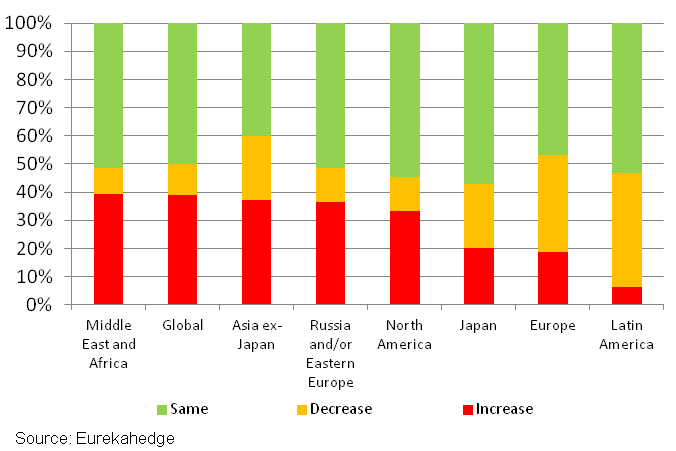 Our respondents were further asked to rank the key criteria that determine their investment decisions, with the results as summarised in Figure 17.

For the vast majority of respondents, manager performance, risk metrics and track record in the industry were the vital factors determining their investment decisions. Brand name of the funds, governance structure and liquidity ranked lower on the scale. 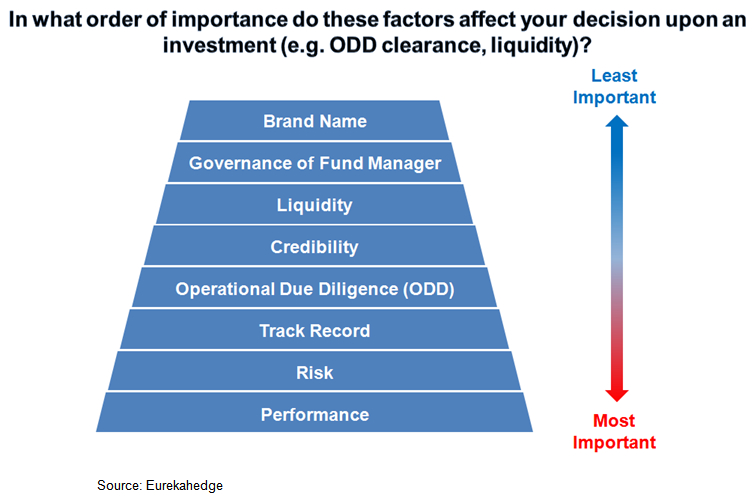 The third section of the survey gauged the market sentiment with regards to the broad economic and regulatory themes that were of primary concern to respondents.

Regulatory challenges were asked as a separate question, followed by a more general question on other challenges ahead.

In terms of the regulatory challenges facing the industry, the results in Figure 18 show that the majority of the respondents remain apprehensive of the increase J-FSA inspection and regulations, with over one-third of the respondents citing this as their biggest regulatory worry going forward. The Dodd-Frank Act in the US ranks as the next important regulatory hurdle, with 25% of the respondents expressing apprehension about the aforementioned bill and its requirement for managers to register with the SEC. 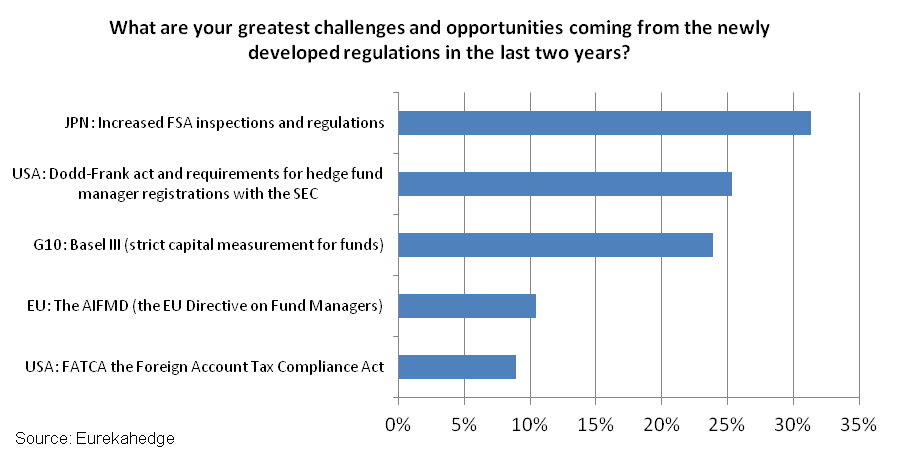 Asked about their biggest worry for 2014 and beyond, almost one-third of the respondents (as depicted in Figure 19) cited China. Given the recent slowdown in Chinese GDP growth figures, their first on-shore bond default and a ballooning in the country’s credit in the shadow banking sector; an implosion in the Asia Pacific’s largest economy could indeed cause strong headwinds not just in regional but also in global markets. Compounding these economic worries could be the rising regional tensions over territorial disputes in the Asia Pacific region.

The next biggest source of worry for the markets remains volatility in the interest rates and any adverse impact on the market from the Fed’s QE tapering. Already, the Fed’s QE scale back has dented market sentiment in the start of 2014, and apprehensions in this stead are in line with the planned reduction in our respondent’s portfolio exposure to Latin America (Refer to Figure 16) which has seen strong capital outflows.

Interestingly, developed market and Euro zone periphery debt levels are the least source of worry for investors, which appears to be in line with the strong asset inflows we have seen into North American and European hedge funds since 2013. 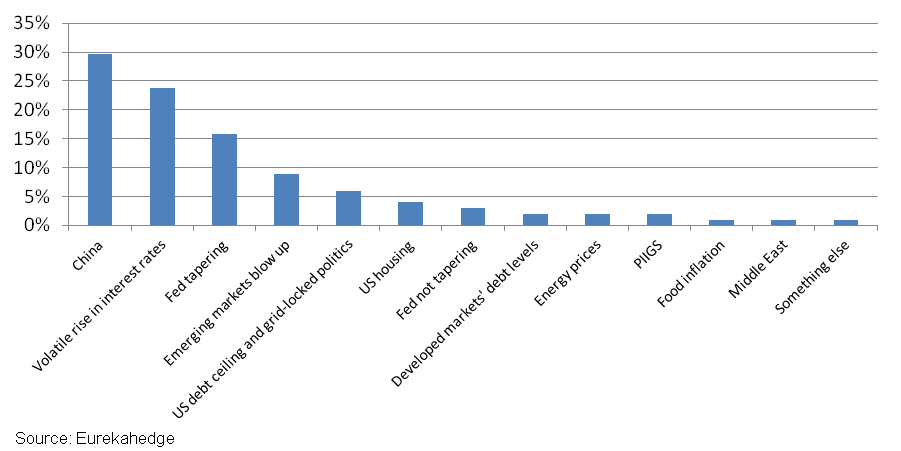 2 For a detailed commentary on key trends in asset flows, performance and fees for the Fund of Hedge Funds Industry please refer to the Eurekahedge Key Trends in Funds of Hedge Funds Report May 2014.