The Asian hedge fund industry delivered excellent performance in 2013, beating underlying markets and outperforming its global peers during the year. The Eurekahedge Asia Hedge Fund Index gained 16.10% in 2013 with the total assets under management (AUM) increasing by US$20.6 billion. This brings the total size of the Asian hedge fund industry to US$147.0 billion managed by a population of 1,333 hedge funds.

The size of the industry stood at US$14 billion as at end-1999, and over the next eight years it grew to US$176 billion by end-2007 – a period which saw a strong growth in the hedge fund industry’s tilt towards Asia. As at end-2007, the total fund population in the region stood at 1,237 funds up from 145 funds in 1999. Gains realised over this period were partially reversed by the advent of the global financial crisis which saw the Eurekahedge Asia Hedge Fund Index decline by 20.31% in 2008, ushering in a spate of fund liquidations as managers struggled to deal with negative returns and redemption requests from investors. The industry bottomed out in April 2009 with AUM declining to a low of US$104.8 billion before witnessing a rebound of sorts amid rallying equity markets and some positive asset flows in the second half of 2009. The industry continued its upward trajectory in 2010, realising strong performance-based growth as the Eurekahedge Asian Hedge Fund Index gained 9.07% during the year. 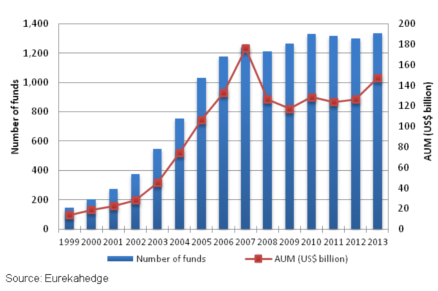 As illustrated to the right, in 2011 the industry shed some of its earlier gains as the Eurozone sovereign debt crisis dominated market sentiment resulting in US$6.4 billion worth of performance-based losses for fund managers in the second half of the year alone.