We thought it would be interesting to compare the returns of the hedge funds in our database based on their locations. In this analysis, we examined a sample of Japanese long/short equity funds. 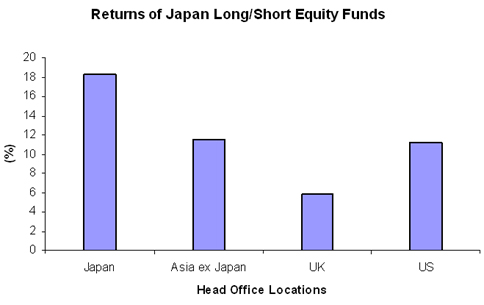 Despite that the annualised returns for Japan-based Japanese funds are slightly skewed due to the exceptional performance by a few funds (located in Japan) in the survey, it is interesting to note that UK-based Japanese funds clearly lagged behind their US and Asian counterparts.

So how did Japan-based Japanese funds pull off such stellar performance in comparison to the non-Japan located funds?

Traditionally, Japanese long/short strategies have favoured investing long mid/small caps and short large caps due to the lack of available research in the former and often overvalued prices due to overzealous retail investors in the latter.

Being located outside of Japan means that it is harder for UK- and US-based Japanese funds to obtain quality research on mid/small caps due to distance, different time zones and language barriers.

Interestingly, US-based Japanese funds have fared better than their UK peers. We suspect this is because more US-based funds are run by Japanese managers who spend more time travelling to Tokyo and/or have Tokyo-based research offices.

Another interesting analysis of the Japanese assets based in Japan and elsewhere gives a sense of where the money is currently compared to where most of the returns are. Clearly, the size of Japan-based assets compares low with that of UK and the US. This perhaps explains why being close to the source of capital matters, as the majority of investors in Asian funds are based in London and New York. 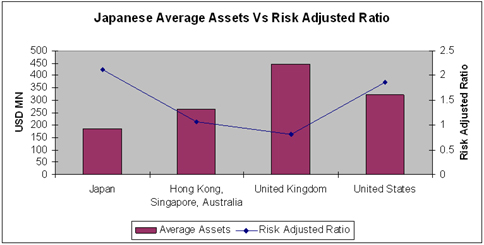