The private equity industry has been on a tremendous expansionary cycle in recent years, following the technology sector-led slowdown between the years 2000 and 2003. For instance, for the year 2005 alone, industry estimates put the total amount of private equity fund raising at over USD230 billion (a 75% jump over the 2004 figure), and the total size of private equity investments at USD135 billion (up 20% on the previous year’s number). This trend had been sustained well into 2006 and beyond (until mid-2007), owing to strong corporate earnings data, a dominant M&A theme, and an increasing interest in emerging markets. This is reflected in Figure 1, which compares new entrants into as well as the overall growth of the industry (by number of funds) by vintage year1, during the last decade. As is evident, there was a marked downturn in fund-raising activity in the years immediately succeeding 2000 and in 2007 (the latter to some extent due to the credit crisis that originated from the meltdown of the US subprime mortgage market) although the industry has grown nearly three-fold (in terms of number of funds) over the 10-year period.

Figure 1: Growth of the Global Private Equity Space over the Years 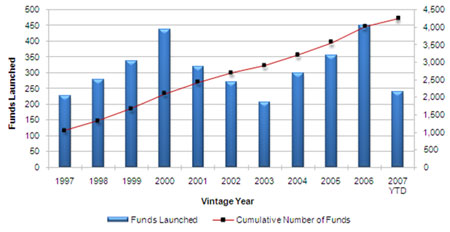 In an effort to serve as a comprehensive source of information and trends in this burgeoning section of the alternative investment landscape, Eurekahedge launched its inaugural Global Private Equity Fund Directory (a directory of professionally managed equity investments in the unlisted securities of private and public companies) last year. The second edition of the directory includes information on close to 4,100 funds while its online counterpart covers almost 4,400 funds, managing a total of US$1.7 trillion in assets. This write-up aims to give a brief overview of some of the information contained therein.

A quick glance at the current structure of the private equity industry (Figures 2 and 3) shows North America (taking into consideration the share of the US and Canada) to be a key centre, both as an investment region as well as a manager location (each with 51% market share). On the other end of the market-share spectrum are countries such as Hong Kong, India and Australia (as manager locations), which individually account for under 3% of the entire market. In terms of investment regions, Asia Pacific as a whole accounts for just over 18% of the global private equity space.

The graphs above are evidently mere static snapshots of the current industry structure. An observation of growth trends of the industry over the last few years reveals that the market share (in terms of number of funds) of North America as a key manager location has been steadily declining – from 58% in 2001 to the current 51%. During the same period, the combined market share of Hong Kong, Australia and India rose by 1.4%, as the number of funds managed out of these locations more than doubled. The share of the United Kingdom increased by 2% over the same period to the current 10%.

Figures 5 (US-based funds) and 4 (the rest) depict the above graphically, comparing the current distribution of funds by manager location, against those three and six years ago.

Similarly, analysing the breakdown of the industry by investment region since 2001 shows a five percentage point drop in the market share of North America-focused funds against those allocating elsewhere, while the share of Asia Pacific-investing funds is now nearly one-fifth of the universe. The number of European funds has also more than doubled since 2001, increasing steadily over the years as is evident from Figure 6.

The current structure of the private equity industry in terms of investment strategies (as shown in Figure 8) remains more or less unchanged from that seen last year. Buy-out/buy-in continues to be the most widely seen strategy in the private equity space, while late stage, special situations and acquisition, among others, make up the minority of the industry. 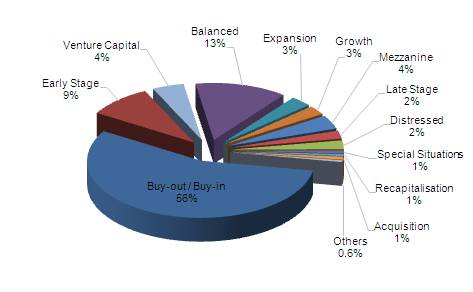 However, when looking at the historical strategy-wise breakdown of private equity funds, it is rather evident that the industry has been through some restructuring over recent years. The market share of buy-out/buy-in firms, as seen in Figure 9, has seen healthy (and consistent) growth – from 25% in 2001 to 26% in 2004, and now stands at 28%. Likewise, distressed, expansion and mezzanine funds have also seen some growth over the last six years. On the other hand, the market shares of balanced, venture capital and early-stage funds have dropped by one, two and four percentage points respectively, since 2001.

Figure 9: Change in the Market-Share of Strategies since 2001 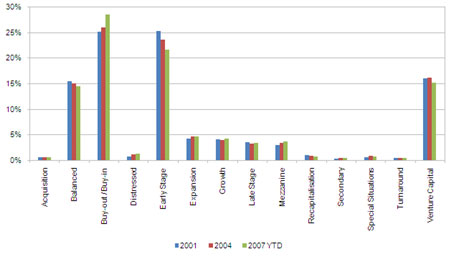 A comparison of performance2, however, tells a slightly different story, with the best internal rates of return (IRR) coming from acquisition, special situations and distressed (57%, 37% and 32% respectively).  This may again be explained by the high activity levels in new issuance and M&A, and improving corporate profitability (until mid-2007, as M&A and new issuance faced a tremendous slowdown on the back of the recent credit crisis). Figure 10 illustrates the average strategy-wise performance (IRR) since inception of private equity funds. 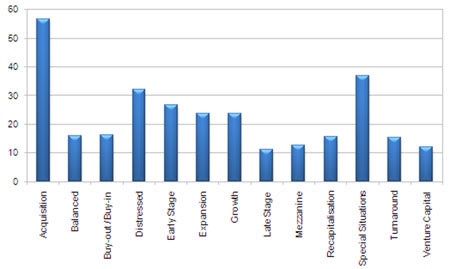 Looking at the same sample of 969 funds from the standpoint of industry-wide performance, Figure 11 charts a distribution curve of the net IRR of each of these funds. The curve exhibits a strong positive skew, with the majority of the funds surveyed in decidedly positive territory, and a good number of funds posting IRRs upwards of 30%. 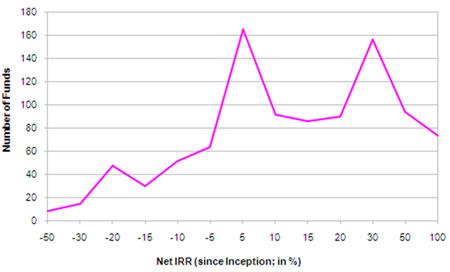 Our outlook for the growth of the private equity industry in the months to come remains positive, as firstly, despite the recent credit crisis that swept liquidity out of the market for a few months, market players have bounced right back, with M&A deals having picked up considerably.

Secondly, private equity firms (especially the larger players) look more independent today than ever before. They no longer depend on external parties such as banks, and often draw upon their own facilities in order to finance their deals. Not only does this cash-rich nature of managers keep them in good financial health, but also gives them more opportunities to profit from, when the market is struck by weakness.

And lastly, the weakening trend of the US dollar, and the consequent strengthening of most major currencies over recent months has only put potential (particularly non-US) buyers in a stronger spot.

1 The year that a private equity fund stops accepting new investors and begins to make investments on behalf of those investors.

2 Average of the Net Internal Rates of Return (IRR) since inception of a sample of 969 funds in the Eurekahedge Global Private Equity Fund Directory.