After a shaky start to the year, hedge funds bounced back in February across the board, with most strategies recovering most or all of January’s lost ground. The composite Eurekahedge Hedge Fund Index advanced an impressive 2.9%1, with all regions recording positive returns during the month. This was despite concerns surrounding a global economic slowdown (and fears of a recession in the US) weighing on most regional markets.

In terms of regional mandates (refer to the graph below), the best returns came from the Emerging markets (as bullish trends in the commodity markets lent support to prices in Latin American, Eastern European and some Emerging Asian equities). North American and Asian mandates were both up 1.7%; the former largely due to the performance of regional CTAs, while the latter owed it to notable returns across equities in some countries). European and Japanese managers were at the lower end of the spectrum, having returned 1.4% and 1.2% respectively. 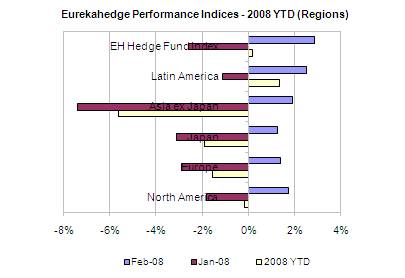 Global equity markets stabilised considerably after the Fed’s aggressive rate cuts in January. As a matter of fact, despite the fears of a recession in the US economy, many equity markets saw some gains during most of February, which (for some) were eventually reversed towards the month-end due to a sudden rise in risk-aversion. Negative data such as rapid declines in both consumer confidence and home prices coupled with a further increase in the core inflation in the US were among the factors that caused the downturn in equities towards the month-end.

Fixed income instruments were negatively impacted by the higher-than-expected rise in inflation, during the month. However, the downturn in equities towards the month-end helped bonds to more-than-offset their intra-month declines. Yields on the US 10-year T-note and the 90-day T-bill ended the month 11 and 9 bps lower respectively, while the yield on the US 2-year T-note closed the month down at 1.62%.

The currency and commodity markets continued to follow their recent trend; the former saw the US dollar decline further against most other major currencies (2.1% and 2.4% against the euro and the yen respectively), while the latter saw crude oil and precious metals touching record highs during the month. 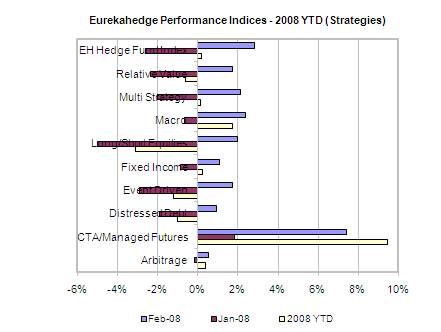 North American managers had a good run in February, despite an evident slowdown in the domestic economy and widespread fears of a recession weighing on the underlying markets. The Eurekahedge North American Hedge Fund Index ended the month of February up 1.7%, as managers made impressive gains from currencies and commodities, while fixed income trades and short positions in equities also resulted in profits for some.

CTAs allocating to the region turned in the best returns (8.8%), as managers largely exploited the decline in the US dollar, while also capitalising on the surge in commodity prices at the same time. Fixed income managers were up 1.6% as lower bond yields and wider credit spreads worked in their favour. Distressed debt players finished the month comparatively flat (0.3%), partly because the high yield market, amid notably wider spreads, had a rather difficult month. 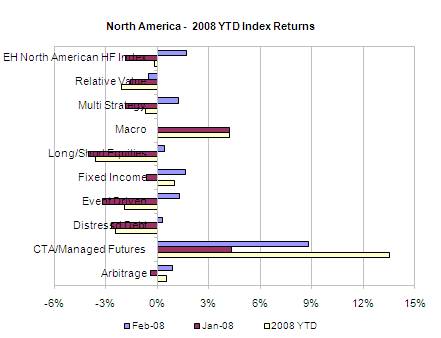 Event-driven and long/short managers were up 1.3% and 0.4% respectively; the former benefited from some strategic M&A activity (such as Microsoft’s unsolicited bid to takeover Yahoo, for instance) while the latter saw gains coming from short positions across the financial and consumer discretionary sectors, among some others.

Arbitrageurs and relative value players turned in returns averaging 0.9% and -0.5% respectively; wider credit spreads coupled with the outperformance of large-cap convertibles (relative to their smaller-cap counterparts) went in favour of the former, while the latter were negatively impacted by the month’s volatility across the equity markets, among other things.

European managers turned in positive returns across most strategies in February, and finished the month up a healthy 1.4%. The underlying markets witnessed high intra-day volatility across equities, as negative economic data emanated from the US dominated regional investor sentiment; however markets remained flat on a monthly basis – the FTSE 100 rose 0.1%. On the currencies front, the euro touched its record high against the weakening US dollar during the month, and closed the month 2.1% higher. 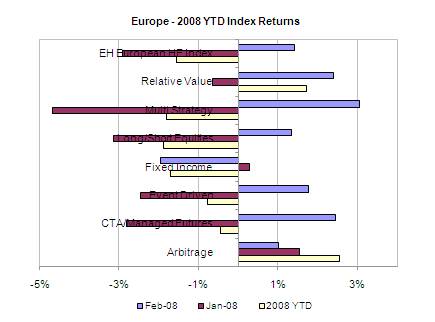 In terms of strategic mandates, multi-strategy managers and CTAs were up 3% and 2.4% respectively; the former were afforded with some healthy opportunities in equities and directional trends in the currency markets, while the latter profited to a great extent from currency and commodity movements during the month. Equity-focused managers (1.3%) made gains from long as well as short positions. Some action – such as the confirmation of a takeover bid for Alltracel (a company in the drugs/healthcare space) – in the regional markets worked to the advantage of event-driven managers (1.8%).

Arbitrageurs and relative value managers registered gains averaging 1% and 2.4% respectively, as high volatility during the month posed managers with profitable short-term trading. Fixed income funds in the region registered negative returns averaging -2%, as one index constituent reported losses in excess of 8% for the month; the 25 bps rate cut in the UK also went some way in shaping the month’s performance for managers of the strategy.

Managers allocating to Eastern Europe and Russia were up an impressive 4% in February, partly due to impressive returns of underlying equities during the month; MSCI’s EM Eastern Europe Index rose 6.7%, with its Russian component up 7.5%

Japanese managers turned in their best returns in over six months; the Eurekahedge Japan Hedge Fund Index rose 1.2% in February, as managers made decent gains from equities and currencies during the month. In the underlying markets, equities had a rather rough spell during the first half of the month, owing to heightened concerns of a recession in the US, but fared better during the latter half on the back of better-than-expected preliminary (domestic) GDP data. The Topix shed 1.6% on the month, while the Nikkei finished the month flat. Currencies moved in a fashion similar to that seen in the previous month, with the yen strengthening significantly (2.4%) against the US dollar. In the fixed income markets, the yield on the 10-year bond declined by 8 bps while that on the Topix rose to 1.73% in February. 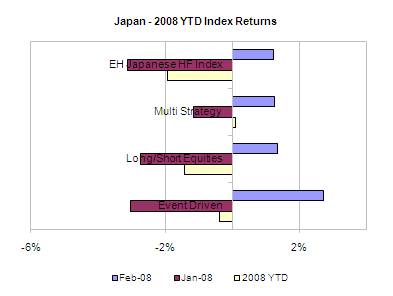 In terms of strategic mandates, all strategies finished the month in positive territory, recording returns in excess of 1%. Long/short managers were up 1.4% making gains from both the long and the short book. Long positions in the food/drugs sector and in stocks of environment-friendly energy producers proved profitable for some managers, while short positions in banking and materials sectors also fetched gains during the month.

Multi-strategy players were up 1.3%, benefiting from their exposure to equities and currencies, while some movements across the bond markets also proved favourable. The Eurekahedge Japan Event Driven Hedge Fund Index advanced 2.7%, owing to the extraordinary performance of one of its constituent funds – which returned in excess of 10%, thereby positively skewing the strategy’s average.

Asia ex-Japan invested managers had a good run in February, as the Eurekahedge Asia ex-Japan Hedge Fund Index advanced a solid 1.9% during the month. These gains were realised amid some volatility, and varied performance across the different regional markets. The MSCI Asia Pacific ex-Japan Index gained 5.1% during the month.

In terms of regional mandates, Greater China-focused managers put up gains averaging an impressive 2.9% in February, despite a 0.8% decline in the Shanghai Composite Index and a notable rise in inflation (7.1% in January) in China. Gains were realised mainly from investments in Hong Kong and Taiwan, as the Hang Seng rose 3.7% while Taiwan’s stocks returned nearly 12%.

In Hong Kong, volatility declined from its January levels, while the market also saw the world’s largest IPO – by China Railway Construction – so far this year. Managers’ long exposure to the properties and hotels sectors did well during the month, as the sectors benefited from the rate cuts announced in the local annual budget. In Taiwan, managers made gains from their investments in traditional sectors such as shipping, properties and airlines, which outperformed during the month. Multi-strategy players (1.2%) in the region made gains from equities and currencies, among other things; the Chinese yuan gained 1% against the US dollar during the month. 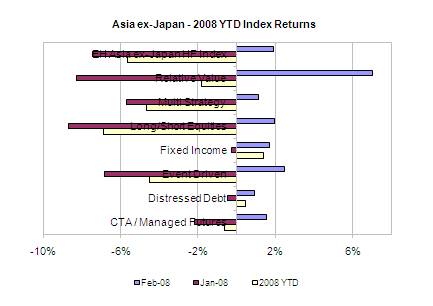 Indian stock markets, despite having opened on a slightly firm note, continued to be volatile in February, exhibiting intra-month swings to the tune of 14%. Weak global cues, coupled with oil prices reaching their all-time high and the absence of any positive triggers during the month, went some way in weakening the sentiment of domestic investors. Managers in the region lost another 3.2% in February, as the underperformance of the consumer durables and banking sectors, among some others, had a negative impact on hedge fund performance.

Australia/New Zealand-focused managers finished the month in positive territory, returning a modest 0.4% in February. This was against a backdrop of negative returns from equities in Australia as well as New Zealand (the ASX All Ordinaries and the NZX 50 shed 0.4 and 2.4 percentage points respectively) and further appreciation in both the currencies (Australian and New Zealand dollars were up 4% and 1.4% respectively) against the US dollar. Equity-focused managers registered absolutely flat returns (0.1%) as gains in the resource and telecom sectors were offset by losses from financials and consumer discretionary sectors. Event-driven managers were up 0.3%, owing to, among other things, some special situations seen in the Australian markets during the month – such as, higher takeover bids for Herald Resources and Resource Pacific, for instance. Multi-strategy managers returned half a percentage point, largely benefiting from short positions in equities and partly from event-driven trades; currency movements also afforded them with opportunities. Relative value players were up 2.5%, as some statistical and convertible arbitrage positions contributed to the month’s performance.

Korean managers (5.5%) recorded solid gains in February, as the Kospi, proving resilient to the global turbulence, staged a strong rebound in February, and returned 5.4%. Positions in the materials and ship building sectors fetched decent gains.

The Eurekahedge Latin American Hedge Fund Index (2.5%) was the only regional hedge fund index to have gained more ground in February than it lost in January. Most of these gains can be attributed to the resilient and notable outperformance of equities and the strengthening of currencies, in the region. The MSCI EM Latin America Index rose 8.7% on the month, as equities in Brazil, Argentina and Chile registered impressive gains; these returns can partly be attributed to the market’s high exposure to commodity hard assets. In terms of currencies, the Brazilian real and the Columbian peso appreciated 3.9% and 5.1% respectively, against the weakening US dollar. Amid these movements, long/short (2.8%), macro (1.5%) and multi-strategy (2.1%) managers finished the month with healthy gains. 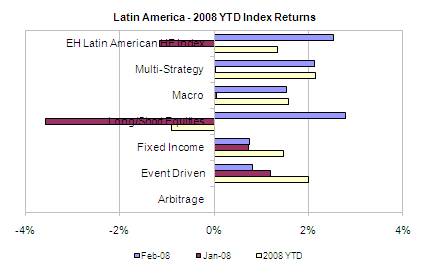 Event-driven managers were adversely impacted by the widespread unavailability of credit across the markets; this is reflected in their relatively subdued performance (compared to other strategies), as returns for the strategy averaged a mere 0.8%. Fixed income players returned 0.7%, as local currency positions in countries such as Brazil, fetched some gains.

Going into March, the markets continue to be characterised by volatility, with many major markets often exhibiting daily movements of about (or even in excess of) 1%. The continued downward trend in the US dollar coupled with a higher-than-expected rise in inflation and other negative economic data emanating from the US (such as poor jobs numbers and further declines in home prices, for instance) have also been weighing on the markets, resulting in heightened concerns about the possibility of a recession in the US.

It will be interesting to observe how the Federal Reserve responds simultaneously to the evident slowing of the economy on the one hand, and to the worrisome rise in inflation on the other. Although there are widespread expectations (among market participants) of another rate cut in the Fed’s next meeting on 18 March, the cut would perhaps cause further depreciation in the US dollar, and consequently, a further rise in inflation.

As for hedge fund performance, the current market movements afford them with lucrative trading opportunities. With crude oil and precious metals hovering at their record highs, the dollar close to its all-time low against some major currencies and equity valuations relatively low across the board, managers could well make decent gains from both the long and the short side. Furthermore, the persistent volatility could also translate into some gains for arbitrage and relative value plays.