After witnessing the best start to a year since 2000, in terms of performance, hedge funds paused for a breather in March 2012, delivering a marginally negative performance. With the exception of the US, most markets across the globe registered declines and the Eurekahedge Hedge Fund Index dipped 0.18%1 in March with the MSCI World Index up by 0.39% in March.

The US market remained strong during the month amid positive data and upbeat outlook from the Federal Reserve. While treasuries sold off mid-month and the US dollar strengthened against major currencies, European and Asian markets were mostly down during the month as focus in Europe remained on Greek debt restructuring and concerns surrounding a slowdown in the Chinese economy effected Asian bourses. 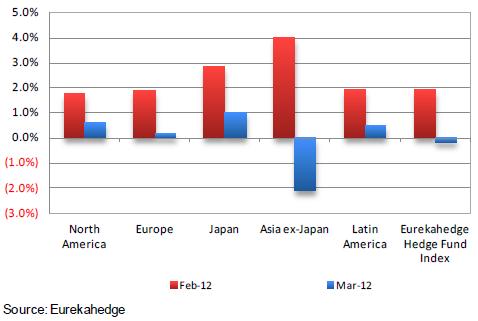 March was a month filled with mixed returns across the various regional investment mandates. Early results showed that Latin American hedge funds delivered the best performance this month and the Eurekahedge Latin American Hedge Fund Index gained 0.51% despite most emerging markets witnessing sell-offs during this period – evident in the 3.50% decline in the MSCI Emerging Markets Index. Managers invested in the region had taken cautious positions in the Brazilian market-based risks of overvaluation and currency. Short positions in Brazil were helpful to portfolios and some managers also reported positive returns from long holdings in the broader region.