Hedge funds continue to attract capital amid turbulent markets and slowing global economic growth, as lowered risk appetites drive investors to seek superior returns for their risk dollars. We currently estimate the size of the global hedge fund industry at near 8,200 single manager funds that together manage assets to the tune of US$1.95 trillion (as at end-June 2008), and expect industry assets to breach the US$2 trillion barrier by end-2008. Figure 1 illustrates the pattern of growth traced by single-manager funds over the past decade. 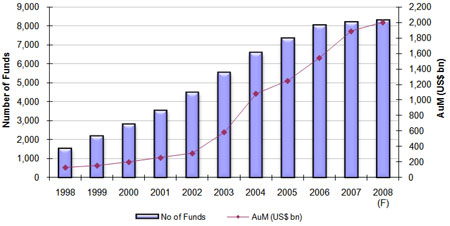 As is evident from the graph, we do not foresee a significant increase in the total number of funds currently operating, while asset growth rates appear to be keeping pace with those in recent years; the first half of 2008 alone has seen net asset inflows to the tune of US$65 billion into the global hedge fund space, despite largely flat performance indices (the composite Eurekahedge Hedge Fund Index was up a mere 5bps at the close of the first half of 2008). It must be noted here this is in contrast with sharp losses in key underlying asset classes (the MSCI World Index lost over 10% during the same period), as also with other absolute return vehicles such as long-only funds (-13.4% for H1-08) and funds of hedge funds (-2.3%).

In the write-up that follows, we attempt a closer look at some of the trends shaping the structure and size of the global hedge fund space in recent months, relying on data culled from the Eurekahedge Global Hedge Fund Database, which contains extensive information on over 7,000 single manager funds. The report is split into two broad sections – the first examines the current structure of the industry, highlighting any significant changes from figures one or two years ago, while the second section takes on an in-depth analysis of fund performance in recent years.

Industry assets have more than doubled in the last five years (with a compounded annual growth rate of 30% since end-2003), raising average fund sizes from a little over US$100 million to US$240 million at the end of June 2008. The current distribution of funds across size ranges is depicted in Figure 2. 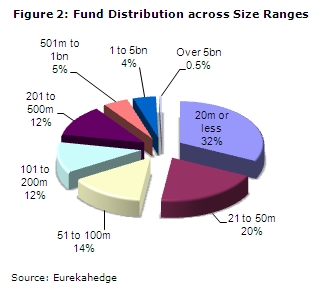 While the above breakdown still shows a high concentration of funds on the lower end of the spectrum (two-thirds of the funds surveyed are under US$100 million in size), the same snapshot of fund distribution taken with funds operating five years ago (ie as at June 2003) shows a far greater negative skew (with nearly 80% of the funds having assets under US$100 million). Likewise, hedge funds with assets exceeding US$1 billion also grew in number, expanding their footprint over the past five years from 1% to 5% of all funds.

The effect of this sizable growth in assets was largely seen in opportunistic (distressed debt, event driven) and directional (equity long/short, macro) strategies, especially owing to strong bullish trends that followed the general down markets of 2001-2003. As Figure 3 shows, assets in event-driven and distressed debt funds saw double-digit growth rates from their end-2005 bases through 2006 (48% and 35%, respectively) and for the most part of 2007 (41% and 27%). 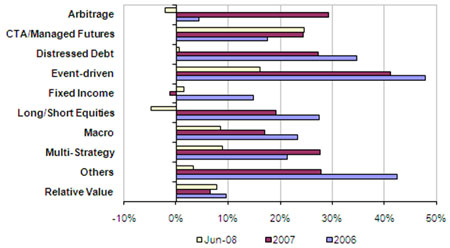 As weakness in the US sub-prime market spilled over into other asset classes in July 2007, lowering risk appetites and shrinking liquidity in the markets, opportunities for special situations plays also dwindled – almost zero growth in distressed debt assets, while assets in event-driven funds saw a relatively modest 16% rise during H1-2008. Similarly, equity long/short managers, who saw strong growth in 2006 (28%), slowed down slightly in 2007 (19%) and shed 5% of their value in the first half of 2008.

Only CTAs were the exception to the trend and saw sustained growth throughout the period in question, supported by rallying commodity prices, as a combination of factors (supply-side restrictions on the one hand and geo-political tensions on the other) held prices up.

At the close of the first half of 2008, the breakdown of industry assets among these strategies looked something like the below: 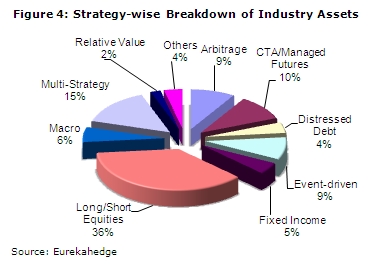 Asset growth rates among regional mandates were understandably more uniform (Figure 5), sharp and rising in 2006 and 2007, and flat to negative in 2008. Allocations to Japan were the one exception, eroding 40% in value over the 2-1/2 year period. 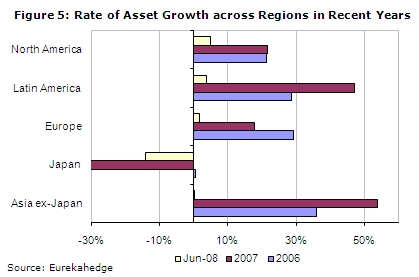 Also, it may be noted that North America-focused funds saw the largest increase in assets among regional allocations in 2008, both in absolute and relative terms, despite starting at a high base. This further supports the point made earlier about risk aversion, and reallocation of funds away from riskier emerging market assets. Figure 6 gives the current distribution of industry assets among regional hedge fund mandates. 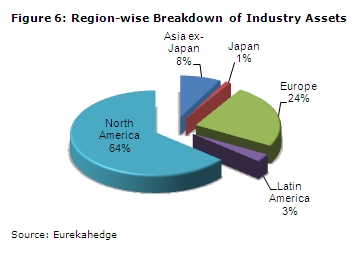 The broad asset growth trends discussed in the previous sections do not fully explain the last 12 months’ performance of various strategies investing in specific regions or based out of specific locations. These performance comparisons are flushed out in Tables 1 and 2.

Table 1 lists the performance of various regional allocations across hedge fund strategies, ranked by all-strategies composites (last column). Allocations to Latin America in general (and Brazil in particular), as also to emerging Europe have clearly benefited from commodity price rallies in recent months coupled with a weakening US dollar. CTA/managed futures funds fared the best among strategy averages (25.8%), as did directional macro strategies (11.2%). Contrast this with the negative performance of distressed debt funds almost across the board, as volumes dried up in the credit markets. This was partly true of event-driven managers as well (2.4% on average). 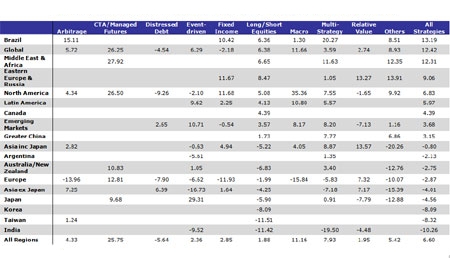 On the other hand, allocations to Emerging Asia endured a rough 12 months (particularly India and Korea, where funds were down 10% and 8% respectively, on average), as inflationary pressures, fears of a global economic slowdown and the credit crunch sent market volatility sharply up. Amid such turmoil, even multi-strategy funds with broad ‘Asia ex Japan’ mandates suffered telling losses (-7.2%).

Table 2 ranks the regions that top-performing managers have been based out of. Long/short managers allocating to China have had a terrible first half of 2008, wiping off almost 14% of their value. The impressive 22.6% returned by the China-located managers does point to the benefits of the ‘on-the-ground’ approach. Similarly, onshore Latin American and Russian funds fared well during the period. Another common theme is the consistently stellar returns from CTA/managed futures managers irrespective of region or manager location. 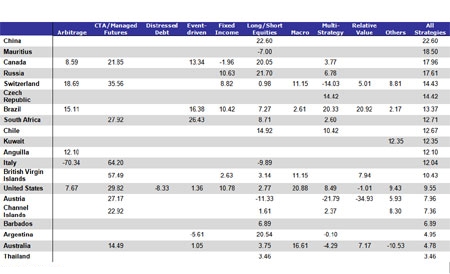 Hedge funds have traditionally offered very stable returns, both on an absolute and risk-adjusted basis (annualised returns of 12% over the last seven years and a Sharpe ratio of 1.6, on average).

In an attempt to quantify the alpha generated by hedge funds, we constructed a hypothetical benchmark index of equities, bonds and commodities by a) combining three broad global market indices viz the MSCI World (equity) Index, the Lehman Aggregate Bond Index and the Reuters/Jefferies-CRB (commodity) Index, and b) assigning weights1 approximately equal to the AuM shares for hedge fund strategies in these respective asset classes (refer Figure 4).

We then compared the performance of the resultant benchmark index with several Eurekahedge absolute return fund indices over the last 12 months, depicted graphically in Figure 7. The hedge fund index had a Beta of 0.7 with respect to the broad market index. At an assumed risk-free rate of 4% per annum, this translates into a Jensen’s alpha of 2.4% (on an annualised basis) for a representative portfolio of global hedge funds. 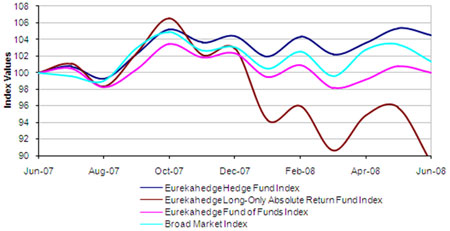 With the majority of the funds surveyed following a 2-20 structure (nearly 90% of the funds charge an incentive fee of 20%), average fees charged have remained more or less constant through the years (19.74% now v/s 19.69% five years ago).

The previous section evaluated in purely absolute terms, the performance of hedge funds against other modes of investment. But the returns compared are net of fees, and long-only funds and funds of funds charge lower fees than their hedge fund peers (10.4% and 15.7% respectively).

So, in order to perform a more accurate comparison, we added back the average fee component to the average 36-month returns (annualised), as also the average 12-month returns, for each fund type. In the case of funds of funds, we added back to the cum-fees returns a second layer of fees (calculated as a combined average of the performance fees of long-only funds and hedge funds) to account for deductions made by the underlying fund managers. The total cum-fees returns for each of the funds, and the respective shares that go to investors and fund managers, are depicted in Figure 10.

Figure 8: Average Returns Split between Investors and Managers for Different Types of Funds 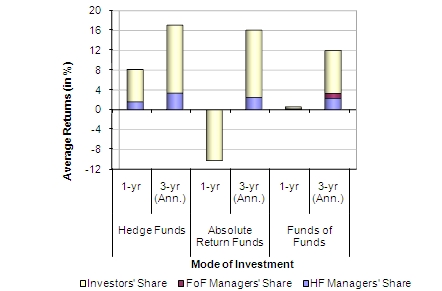 As can be seen, on average, hedge funds have not only delivered superior returns (even in periods of market turmoil), but also returned a bigger share of the total returns to their investors than funds of funds and long-only funds, leading us to conclude that hedge fund investments continue to be attractive to investors.

During a period that saw investor confidence in the markets down, liquidity all but dried up, big-name financial institutions incurring significant losses (some of them serious enough to precipitate regulatory intervention), a slowdown in growth imminent and risk premia soaring, hedge funds globally have been able to curtail losses, if not turn in profits, and have been able to attract investors as well; during the first half of 2008 alone, the global hedge fund space has seen net inflows to the tune of US$65 billion. We expect industry assets to breach the US$2 trillion mark by year end, although there has been a rise in fund attrition rate and launch activity has remained lacklustre for the year to date. There are some positive signs on the macroeconomic front, however, as commodity prices are on the retreat bringing down inflationary pressures with them, while the US dollar has also reversed its weakening trend. This has gone some way in giving consumer as well as investor confidence a fillip.

Our outlook for hedge fund industry growth and performance remains positive, with volatile markets continuing to offer up lucrative plays in the short to medium term. We have already seen fund managers addressing the downside of such volatility through diversifying strategies employed and/or broadening regional mandates.

1 The weights assigned were as follows: 50% for the equity index, 10% for the bond index and 20% for the commodity index.