The Eurekahedge Hedge Fund Index has continued its negative streak for the sixth month in a row, falling 0.7%1 as November saw the continuation of several of the dominant themes from September and October: distressed selling, deleveraging and redemptions among hedge funds, heightened volatility and an increasing disconnection between asset prices and underlying fundamentals, and economic data exacerbating the recessionary growth outlook. In fact, it is commendable that, in this worsening investment environment, month-to-month losses for the Eurekahedge Hedge Fund Index have been the least negative in the last five, while net redemptions are also slightly down from previous monthly highs.

Returns across regional mandates were mixed. Asian managers were generally flat to positive on the month, with emerging Asian allocations down 0.4%, while Japan allocations gained 1.3%. Latin American managers were also up 1%, while allocations to the developed markets finished the month negative (-2.1% for North America, -0.9% for Europe). This is somewhat in step with underlying equity market performance – European and North American equities lost between 6% and 8% on average, while Asian equities finished the month down 3% (MSCI All Country indices). Losses were stemmed/offset by a month-end rally in global equities amid expectations of additional bailout/stimulus packages. 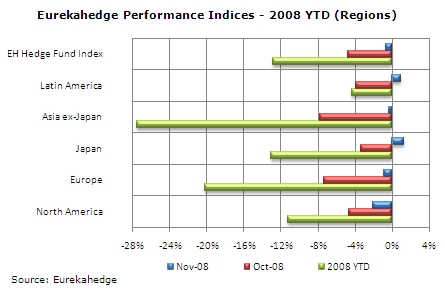 Returns among strategies followed patterns seen in previous months, with directional plays in the commodity and currency markets proving profitable for CTA (1.5%) and macro (1.1%) managers, while event-driven (-2%), equity directional (-1.7%) and relative value (-1.3%) trades ended the month negative. The one exception was fixed income managers (0.9%); trend-following drove the month’s gains as prices rallied in an environment of low inflation and rising demand for safe-haven assets, and treasury yields touched record lows.

As the year draws to a close, most managers are positioned for an environment of heightened risk aversion and volatility; leverage levels are down and cash levels are up across the board, while an increasing number of funds have locked down on redemptions to avoid liquidity constraints and closing positions at a loss. The frequency and magnitude of several government bailout/economic stimulus packages, suggests a more significant role for the government in the functioning of the markets. Furthermore, recently unearthed frauds (such as the Bernard Madoff case) will lend further support to the calls for greater regulation.

In this cautious investment climate, hedge funds continue to be relevant as vehicles for broad-market absolute return and preservation of capital, and current market conditions are favourable across hedge fund investment styles. We expect trend-following and arbitrage strategies in the commodity and currency markets to be profitable in the near term, while opportunistic or value bets in the credit markets (and to a lesser extent, equities) promise longer-term gains.