As we look back at the untamed securities markets that defined 2008, we naturally have to ask ourselves which asset classes performed the least poorly. To do this, we use the software platform on AlternativeSoft, which enables us to run statistics on individual funds, as well as on a group of hedge funds. Using ‘Asset Search’ function, we divided the assets under management (AuM) of the hedge fund universe into four buckets of different sizes1 as shown in Table 1 below.

Table 1: The Universe of Hedge Funds Broken down by Size

In the following sections, we first summarise our findings of how hedge funds with different sizes of AuM performed. Second, we dig a little deeper and explain our findings on the performance between four hedge fund strategies.

Did Larger Hedge Funds Outperform Smaller Ones from January to October 2008?

Much media talk, and indeed a meaningful part of hedge fund allocations, have in recent years focused on large hedge funds. But how did large funds perform in 2008 as compared to their smaller peers? Does size matter during a ‘market crash’?

In our analysis, the ‘Super-large’ bucket outperformed the other three AuM buckets by an average of 250bps, from January to October 2008. To position this in perspective, on an annualised 3-year basis, the ten largest funds outperformed small, medium and large funds by 650bps, 500bps and 400bps respectively.

For the first ten months to October 2008, the ‘Super-large’ funds outperformed the other funds with better relative returns and mostly better Sharpe ratios. Hence, at first glance the simple takeaway would be that size does matter.

How did Hedge Fund Strategies Perform across Different AuM Segments?

To find possible answers to this question, instead of comparing the entire universe of hedge fund strategies, we focused on four popular strategies – Macro, Equity Long/Short, Multi-Strategy and CTAs.

From January to October 2008, macro funds averaged 2.4% returns. Interestingly enough, macro funds belonging in the ‘Large’ bucket averaged 0.31%, compared to small and medium funds with 2.94% and 1.95% returns respectively (see Table 2). One potential explanation for the lower returns for ‘Large’ macro funds might be the increased complexity involved in the unwinding of larger positions.

Looking at the equity long/short category, it was again the ‘Small’ bucket outperforming the ‘Large’ and ‘Medium’ buckets. The outperformance of ‘Small’ versus ‘Large’ was 100bps.

In the multi-strategy category, the ‘Medium’ bucket was the clear underperformer and ‘Small’ the best performer.

‘Small’ CTAs proved to be the leaders in this category. ‘Large’ CTAs underperformed by between 180bps and 520bps, compared to ‘Small’ and ‘Medium’ CTAs, respectively.

Figures 1 and 2 present the same results but in a graphical format. We see that the higher the AuM (ie right of the graph), the smaller the YTD2008 returns, for CTAs, macro and equity long/short funds. 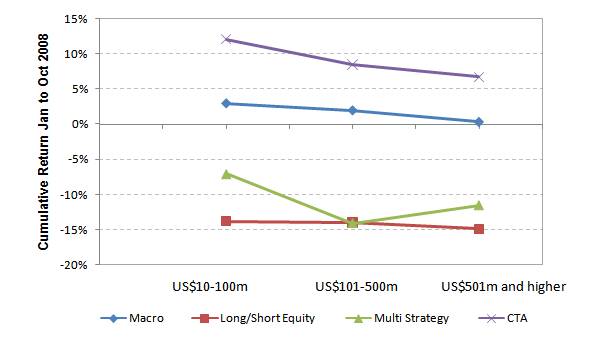 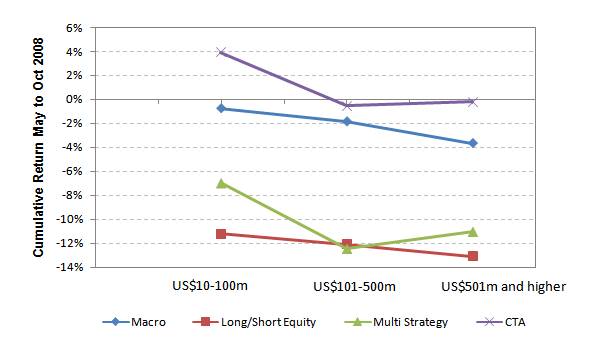 Having looked at relative return characteristics of hedge funds with different levels of assets under management, our analysis found that the ‘Super-large’ bucket was a clear winner in the period from January to October 2008. One of the reasons is that experience matters when a financial crisis appears. The ‘Super-large’ funds have a much longer track record than smaller funds – 63 months average track record for ‘Small’ funds; 72 months for ‘Medium’; 89 months for ‘Large’; and 135 months for ‘Super-large’.

On the other hand, ‘Small’ funds outperformed ‘Middle’ and ‘Large’ funds in all of the four strategies we analysed by an average of 3%, for the period January to October 2008.

To summarise, a basic strategy investing in the ten ‘Super-large’ hedge funds, with a mix of small CTA and macro funds would have brilliantly outperformed the hedge fund indices.

1 Funds with assets < US$10m were not considered. Funds of hedge funds were not included in the study. September and October 2008 data were not available for all funds. In the ‘Super-large’ bucket, two hedge funds had large returns, which may skew the results. We have intentionally not used statistical measures like R-squared, t-statistics or Granger causality in order to keep the paper readable.