The Eurekahedge North American Hedge Fund Database contains data on 3,850 funds1, based partly on which, we estimate the current size of the region’s hedge fund industry at 4,670 funds, managing about US$1 trillion in assets. This, despite a decline in both the number of funds and assets through 2008, marks an annualised increase of 6% and 12% in the number of funds and AuM respectively, since end-2003. Figure 1 shows the growth in the region’s hedge fund space over the past decade. 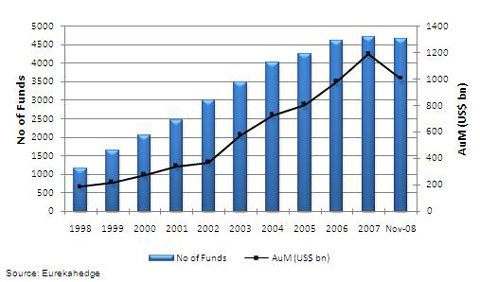 While the above chart reflects the growth seen across the industry over the years, it also clearly points out to a drop in the number of funds, and a sharper one in assets, during the first 11 months of 2008. This can partly be attributed to the harsh movements seen across the underlying markets, which brought about record levels of volatility across asset classes and a spike in investor risk aversion. The adverse impact of such movements on hedge fund returns triggered redemptions from the industry, which accounted for a portion of the decline in assets.

North American hedge funds, on the whole, have fared notably better than those investing across most other regions in the past year, with the Eurekahedge North American Hedge Fund Index having lost 10.6% through 2008. This compares well with the underlying markets, where the S&P 500 lost 33.5% for the year, crude oil closed the year down 54%, and most major currencies recorded double-digit percentage declines against the US dollar.

On a micro level, however, several funds did take a hit during the year, owing to the turbulent markets, distress across credit markets and investor redemptions. These factors are likely to continue to put pressure on the industry over the months to come. However larger managers have an added advantage of being able to diversify their assets geographically, and maintain a fair portion of their portfolio in cash in order to meet redemptions. Small funds, on the other hand, with their inability to do so, could run the risk of either being unprofitable (in case they hold a large portion of their portfolio in cash) or suffering losses (in case of having to liquidate holdings unexpectedly to raise cash levels). In this light, we believe that the current stress in the industry might, on some level, work as a filtration process and even threaten the survival of some small and inexperienced managers, particularly over the near term.

Having said that, we expect to see more hedge fund start-ups over the near future, given the increasing number of people moving out of investment banks (whether voluntarily or otherwise) to venture into the hedge fund space.

In terms of returns, we believe that hedge funds are in a better position to generate superior returns than most other conventional managers and market players, owing to the flexibility that hedge fund managers enjoy, and their ability to identify new trends and investment ideas and act on them promptly. We anticipate trend-following strategies to continue benefiting from market movements across the currency and commodity markets, as they had through most of 2008. We expect the equity markets to remain volatile and range-bound over the next few months, but long/short managers could potentially benefit from pockets of opportunities (even if short-term ones) on both the long and the short side, given the uncertainty around the 4Q08 earnings reports and deeply discounted valuations across most sectors.