January was a positive month for hedge funds, as managers outperformed the underlying equity markets and most strategies finished the month in the black; the Eurekahedge Hedge Fund Index returned 0.2%1. This translated into US$2 billion net performance-based increase in assets during the month, which was, however, negated by net redemptions of US$71 billion2 through January. 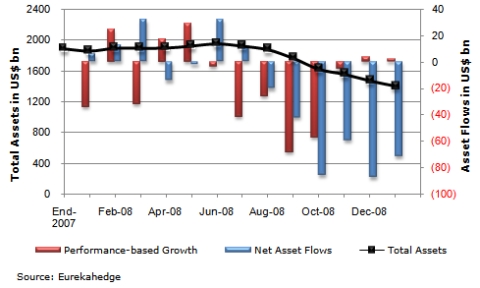 Below are the highlights on asset flows for the month of January:

January marked the sixth consecutive month of redemptions from the hedge fund industry, with over US$360 billion of net outflows seen since August 2008. We expect to see more redemptions over the coming months owing to the following factors:

However, we also expect some fresh allocations into hedge funds, and foresee gradual inflows to surpass redemptions over the first half of 2009. This is primarily because the bulk of the panic-driven redemptions have subsided, and also because we expect investors to turn to hedge funds for absolute risk-adjusted returns and for their ability to consistently outperform their long-only counterparts (the Eurekahedge Long-only Absolute Return Fund Index shed 3.3% in January, while hedge funds finished in the black).

2Estimate based on 65% of AuM reported, and subject to a final revision towards mid-March.