After growing at a rapid pace for the past decade, the European hedge fund industry in 2008 shrank against a backdrop of heightened recessionary pressures and record levels of volatility across most asset classes. Based on the data of 2,3741 operational and 983 obsolete funds in the Eurekahedge European Hedge Fund Database2, we believe there are currently 2,291 funds investing in Europe, managing US$300 billion in assets. This marks an increase of 58% in the number of funds and 133% in terms of assets, since the end of 2003. Up until 2008, the marked difference in the growth rates suggests a sharp increase in the average size of hedge funds in the region over the years, owing to superior risk-adjusted return which led a strong inflow of capital into the industry. 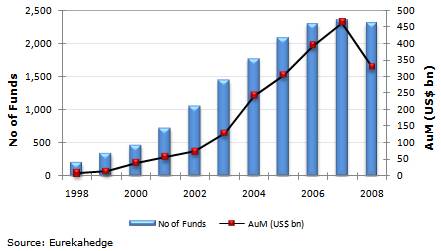 In 2008, the industry shrank by 29% in terms of assets; but in terms of the number of funds, it shrank by only 2.2%. The decline in assets can be explained by the losses suffered by hedge funds across the board and in the region, which led to widespread redemption of capital from the industry – losses and redemptions eroded US$46 billion and US$89 billion respectively out of the industry in 2008.

However, the notably lower decline in the number of funds can be attributed to the following factors: a) the closure3 of 230 funds in the region was partly offset by 180 new launches during the year; b) although a number of new and smaller managers were more affected by losses and redemptions and were forced to close down, most of the established and larger managers continued to survive the downturn despite losses and declines in performance fees. Having said that, we still expect to hear about more fund closures in the near future given the “lag effect”; furthermore, some fund managers’ prolonged inability to charge performance fees will make it difficult for them to meet their operational costs, eventually forcing them to wind up.

After a rough year, followed by flat to negative returns in the first two months of 2009, March was a strong month for both hedge funds as well as the underlying markets. The Eurekahedge Hedge Fund Index returned 1.4%4 during the month, against a 7.2% and 4.4% increase in the equity and commodity markets respectively. The relative underperformance of hedge funds is partly because managers of late have been conservatively positioned in anticipation of redemptions and/or unpredictable market volatility.

In Europe, hedge funds were up 2.7% in March, outperforming managers allocating to most other regions. The broader European index, however, was to some extent-driven by the performance of Eastern Europe and Russia-focused funds (up an impressive 14% on average, in March). Going forward, although uncertainty still persists, we believe that managers will …

2 Includes funds that are either based or investing in Europe.

3 Estimates based on confirmed closures reported to Eurekahedge.