After delivering impressive returns through most of 2009, hedge funds registered a slight decline in January 2010 against the backdrop of heightened risk aversion and mid-month reversals in market trends. The Eurekahedge Hedge Fund Index shed 0.89%1 during the month while markets across the world recorded sharp declines in the second half of the month.

The major trend across the different regional mandates was that of outperformance as managers investing in all regions proved their ability to protect capital in falling markets. The best performances were delivered by Japanese and European managers, who returned 0.84% and 0.80%, respectively, making good on their short exposures to the underlying markets, which ended the month in negative territory – the Nikkei shed 3.3% while the MSCI AC Europe Index lost 5.95%.

The chart below shows hedge fund returns for December 2009 and January 2010 across the different geographical mandates: 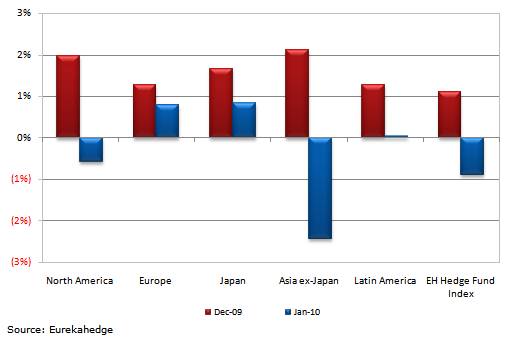 Asia ex-Japan managers were down 2.45% during January after witnessing record returns in 2009 as the underlying markets registered some heavy losses during the month. Concerns over...